Five generations together in the one room 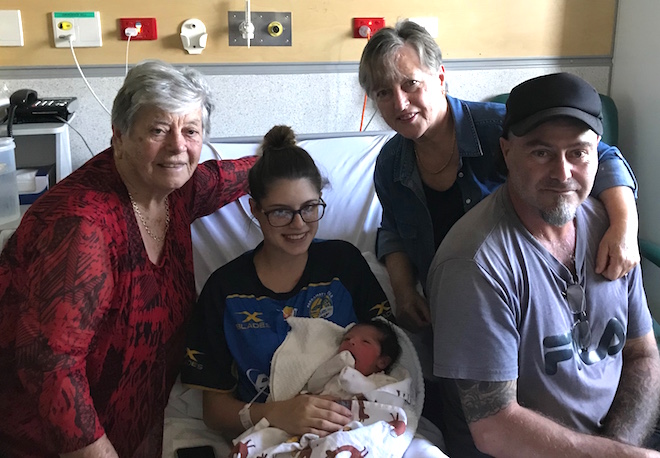 On 9 March, Rosa Mercorella and daughter Lina Totani rushed to get a flight to Alice Springs from Adelaide.

For Lina, Alice was home for over 30 years and even now that she lives in Adelaide, she’s never away long enough from Alice to really miss it.

Her two sons, David and Paul, are born and bred locals and their children are all still here.

The high heat of summer has become too much for Rosa. At 92, she’s still travelling, spending time with her grandson, Grant Mercorella and his family, who now lives in Perth (many will remember his physiotherapy practice in Alice) as well as with her daughter Diane and grandson Taylor in Canberra, and with Lina in Adelaide.

By the afternoon the women were with the baby and her mother, Bianca Totani, at the hospital.

Bianca, 20 years old, is the daughter of David and his partner Noralee Windsor, one of the Brays, a large local Aboriginal family.

In the days since the birth – in “a special moment”, says Lina – all the women on both sides of the family have been together: Rosa and Lina, Noralee and her mother Lynette, Bianca and tiny Gabriella.

Gabriella’s birth also makes for three generations of Mercorellas and Totanis born in Alice Springs. (On the Bray side of the family, of course, the generations stretch back to time immemorial.)

Lina and husband Lino left town in 1999, returning to Adelaide where Lino passed away four years ago. They had come here as a young married couple, following Rosa and her husband Salvatore, and Lina’s brother Con.

Salvatore and Con were in the building game, and for a while Lino joined them, working on many of the major public buildings around town – the hospital, the courthouse, the gaol, the police station – as well as the casino.

Later Lino worked as a prison officer, while Lina worked at the courthouse, the magistrates’ secretary from 1975 until they left town, almost 25 years.

Sadly her brother Con passed away, from cancer, well before his time. He was only 44.  (Mercorella Circuit in Sadadeen is named after him.) This followed the deaths of his father and grandfather.

“Rosa is strong”, she says of her mother.

She has rebuilt her life: she still drives, she lives on her own, she has a large circle of friends, Australians and Italians – “her social life would put us to shame!”

She has learned how to make the most of new technology, keeping up with her family in other parts of Australia, and in Italy and Argentina, by iPhone and iPad.

She enters her handwork in the Alice Springs Show every year, getting inspiration for her designs on YouTube – usually winning first or second prize.

“And I’ve still got my brains,” adds Rosa.

That’s quite a role model little Gabriella has to look up to.