Council's ambitious solar plan: 100% of what?

Above: Solar array at the town pool. Photo from council’s 2018-19 annual report.

Please note: This report will be updated when answers to our additional enquiries are provided.
UPDATE,  14 February 2020, 11.19am: Council can provide no further detail at this early stage of the plan.

In what looks like an ambitious plan by the Town Council –  “to investigate and create a solar system virtual power plant that will generate sufficient electricity to cover 100% of ASTC’s electricity consumption” – the 100% is apparently of the “Council’s administrative capacity”.

That answer to our request for clarity sounds like bureaucratese for the Civic Centre.

Does it include the Library? the Alice Springs News has asked – not really an “administrative capacity” but it’s right there in the same building complex. And what about the Depot? It already has a solar array on its roof. Is this part of what is meant by a “virtual power plant”?

Sports facilities buildings seem to be included, and some already have solar installations, as pictured. But what about sports field lighting –  the News gave this as an example of a power-hungry use? The light towers are on “a user pays system”, advises Scott Allen, Director Technical Services. Therefor not part of the plan.

The answer suggests a confused focus in the “project scoping” – is it about reducing costs as much as reducing fossil fuel-based energy consumption?

Of course, every little bit of solar energy provision counts in the race to get to a post-carbon economy, but it’s important to know with precision what we are talking about when it comes to understanding and evaluating climate change responses, including council’s.

The envisioned solar system virtual power plant was reported as “in progress” – 10% complete – in an update on council’s Climate Action Plan (CAP) and welcomed by Councillor Jimmy Cocking as a “great news story for council and the town”.

Other updates were singled out by Mayor Damien Ryan. 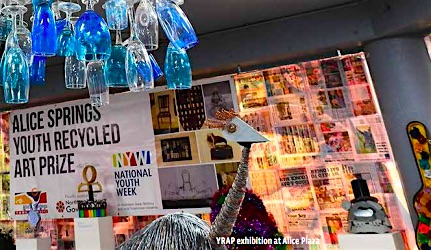 He was not pleased to see that the Youth Recycled Art Prize has been given a theme of climate change: that “hijacked” the prize and might “suit some people but won’t suit all the young people who have taken part in the past”.

The young artist who won last year wouldn’t have participated had the theme been climate change, the Mayor contended. How he knows that, he didn’t say. He did say he would be supportive of an award for climate change themed work (as a category within the prize), funded by the CAP.

The Acting Director Community Development will follow up with officers.

The prize is “coming up very quickly”, warned Mayor Ryan. “It would be wrong to throw out the people who have been participants before.”

He noted that ALEC – the Arid Lands Environment Centre – is to conduct education sessions for the community at the Todd Mall Markets and in the Andy McNeil Room.

At this point, Cr Cocking left the room. He is the CEO of ALEC, although, as he pointed out on his return, he stands to gain no personal benefit from the contract and technically has no conflict of interest in discussing ALEC’s business with council as ALEC is a “community organisation with public benefit”.

Is this – the education sessions – a paid consultation? Mayor Ryan wanted to know.

The Mayor wanted “to see numbers around that”, commenting that he had recently introduced the CEO by email to Geoff Goodrich of Great Power Solutions, who “regularly visits Alice Springs”.

“There are more organisers than just Arid Lands Environment Centre to be able to help our community progress action on climate change,” he added. And other providers “may be able to reach other parts of the market”.

(Note: Great Power Solutions does not appear to be an “organiser”, but rather a business. Nothing wrong with that, but different. ALEC also has business arms, its “social enterprises”.)

Mayor Ryan asked who is developing a photovoltaic information booklet, website display and workshop and suggested there may be no need to reinvent the wheel, referring the Acting Director to the knowledge gained from Alice Solar City (a major project, led by the Town Council, but which ended in 2013).

Finally, he queried the financial reporting of the FOGO trial – recycling food and garden waste at the landfill – the major initiative of the CAP, with an estimated budget of $229,218.00; that’s 91.7% of the whole CAP budget, $250,000. The Mayor wanted to see distribution of the FOGO budget under its various headings (staff hours etc).

The CAP update is available on council’s website, in the Technical Services meeting papers for 10 February 2020.