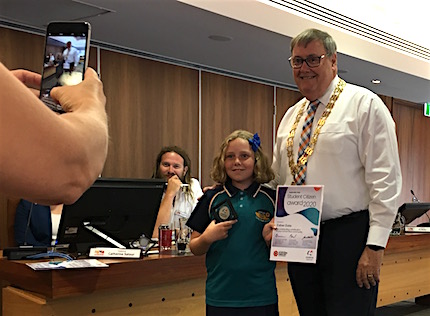 The Town Council will seek an independent legal opinion on how to manage the potential conflict of interest in Mayor Damien Ryan also being an endorsed CLP candidate in the next Legislative Assembly election.

This follows debate during the ordinary meeting last night over the assessment by council’s in-house solicitor Chris Turner that the need to manage the situation would be minimal.

Cr Cocking was unconvinced by Mr Turner’s emphasis on Section 73(2) parts (b) and (c)  of the present Local Government Act to the effect that  having “an interest” does not  amount to having a “conflict of interest” if that interest is shared “in common with the general public or a substantial section of the public”.

He argued that those sections do not address the very particular context of the council’s “principal”, the Mayor, seeking political office in another tier of government (and in opposition to the government of the day).

Mr Turner’s advice also did not deal with the risk for the council that the government of day is not prepared to engage with council because of what it sees as the Mayor’s conflict of interest, said Cr Cocking.

Cr Banks said Mr Turner recognised that there will be “space for conflict” even if minimal and, echoing Cr Cocking, said he didn’t “go deep enough” in addressing the perception of conflict.

She supported Cr Cocking’s call for seeking independent legal advice. The perception of a conflict will only grow as election draws nearer, she said: “I don’t think this is the last time we’ll be talking about it.” 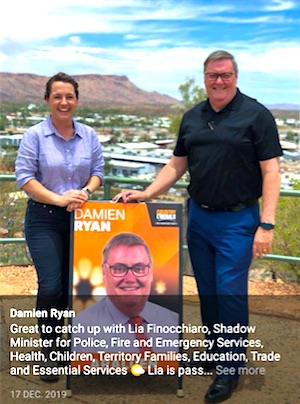 In the meantime, how will council respond to letters on the subject from the Chief Minister and Deputy Chief Minister, Cr Banks wanted to know.

The Chief Minister’s letter put on hold his response to the issues at hand (community safety, youth strategies) pending council’s response. His letter made clear that he does not want to deal with the Mayor in council’s business with government.

Left: On the same Facebook account, @DamienRyanAliceSprings,  Mr Ryan the CLP candidate, and below, Mr Ryan the Mayor.

There was other correspondence in council’s meeting papers from three top level bureaucrats in the Department of Local Government. All had written in the context of councillors nominating as candidates in the next election, with two of them specifically talking about the potential for conflict of interest to arise.

Mayor Ryan took comfort in the letter from Jamie Chalker, former CEO of the Department, that such conflicts can be appropriately managed.

However, the letter advises that should an elected member seek to participate in a matter in which they have a conflict, they are required to seek approval in writing from the Minister.

None of the letters goes into the nitty-gritty of what would constitute a conflict.

Cr Eli Melky put the ball in CEO Robert Jennings’s court: how would he answer the Chief Minister?

Mr Jennings acknowledged that the “perception test” is important, but it has to be around a specific item, the conflict “doesn’t exist in a vacuum”. Mr Turner’s advice outlined the legal framework, as the ICAC would if a complaint were made.

How to deal with the NT Government was a different matter, he said.

Cr Glen Auricht accused the Gunner government of “frivolous politicking”. He respected the report by Mr Turner and said council should leave it at that, with the Mayor continuing to work “for the benefit of the community” until the election is called.

Cr Cocking had some practical suggestions for the Mayor in managing the perception of conflict. One was to manage his social media accounts with clearer delineation between his role as Mayor and his CLP candidacy, suggesting that this was not currently the case. (See images above and below.)

He also suggested that the situation presented the opportunity to distribute some of the Mayor’s responsibilities among other elected members, so people get to see “all the faces” of council, demonstrating council’s “representativeness”.

On the last point, Cr Jacinta Price, attending the meeting by phone, said this is what council has always done if the Mayor is unable to attend an event.

Cr Banks asked the Mayor how he thought council should manage this perceived conflict of interest. 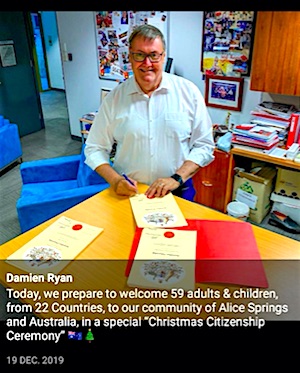 He had managed it from beginning, he replied, and had already “laid things out” for the CEO around future meetings. He said he is in no different a position to many others and will continue as Mayor until writs are served for the election.

He described Mr Gunner’s response – not answering the content of the Mayor’s letter, only talking about his position – as “rather disappointing”.

Cr Banks asked the CEO what had been agreed between himself and the Mayor.

Mr Jennings responded in general terms first, saying that the Local Government Act specifically allows an elected member to run for office in another tier of government. A perception of a conflict of interest will be determined “if a conflict note is put in by someone”. That would be tested in reference to the Act, retrospectively. But the conflict needs to “exist in a context” first.

Specifically, in relation to an upcoming event at which community members will debate priorities for the NT election, the Mayor had told him he would not attend.

Cr Banks provided the resolution, seconded by Cr Melky, that the CEO seek independent legal advice and provide a report to council so that appropriate action can be taken to resolve this matter.

The Mayor abstained from the vote. Deputy Mayor Matt Paterson and Cr Jamie de Brenni were absent. The motion was carried four votes to two.