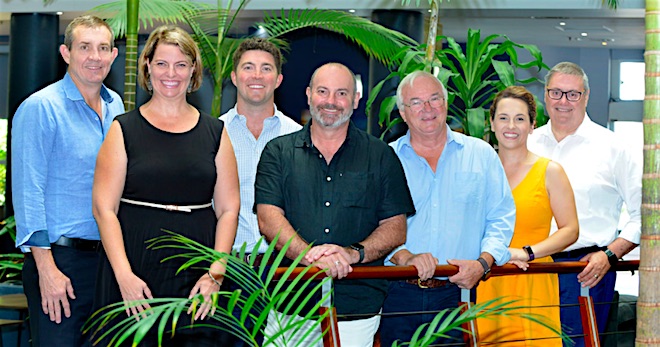 Above: Damien Ryan CLP candidate for Araluen, far right, pictured with fellow CLP candidates, from left, Gerard Maley (Nelson), Marie-Clare Boothby (Brennan), Joshua Burgoyne (Braitling), Bill Yan (Namatjira), Gary Higgins (has since stepped down as Leader of the Opposition and will resign at the end of the term as Member for Daly), Lia Finocchiaro, new Leader of the Opposition, (Spillet). Photo: CLP website.

Hot topic for the first Town Council meeting of the year will be Mayor Damien Ryan’s perceived conflict of interest now that he is the endorsed CLP candidate for Araluen in the next Legislative Assembly election.

Chief Minister Michael Gunner has declined to answer December correspondence from the Mayor, on behalf of council, until council advises on how it will deal with what he says is the Mayor’s conflict of interest.

The correspondence in question concerned “crime and the healthy future of our community”, including a request to  the government to establish a 24 hour drop-in centre.

Deputy Chief Minister Nicole Manison has also weighed in. While she responded to the substance of correspondence, she also asked how council will manage the alleged conflict of interest.

“This will inform how the Chief Minister and my colleagues correspond and work with the Council in the months ahead,” she wrote.

However, Town Council solicitor Chris Turner has examined the relevant legislation and implied constitutional right. He advises: “As an elected member, [Mayor Ryan] is entitled to his views whether or not they align with a political party and whether or not he chooses to stand for election.”

Critical to this advice are the provisions of Section 73(2) of the present Local Government Act to the effect that  having “an interest” does not  amount to having a “conflict of interest” if that interest is shared “in common with the general public or a substantial section of the public”.

The language is similar in Section 114(1) of the new Local Government Act, which has been enacted and will come into force from July 1 this year.

Says Mr Turner: “Politics pervades all areas of life, including the civic arena, and cannot be quarantined from it. The words ‘personal or financial’ connote something of individual benefit to the member or an associate rather than shared political views. If the intention of the Legislature was that political affiliation would give rise to the need for a declaration, it would have done so in explicit terms and would have been a brave one at that – for civic representation is very often the breeding ground for Territory or Federal political careers.”

Nonetheless, he has some advice on the limits of campaigning:

“In my view, it would be unwise (but not unlawful) for the candidate to willingly allow him or herself to be referred to as the president, mayor, councillor or member. If so, they should immediately remind the interviewer that they are not representing the views of council in any way whatsoever and are standing on a party platform. They should never ascribe to themselves the achievements of a council or attempt to denigrate the council or its deeds or any member (unless perhaps that member also stands).”

Referring specifically to Mayor Ryan as  the CLP endorsed candidate, Mr Turner assumes that his views and votes in council on issues such as “the proposed National [Aboriginal] Art Gallery, a youth curfew, other community safety initiatives, projects specific to the Araluen electorate” will reflect the CLP position.

This is his right, says Mr Turner, as it is the right of any other elected member.

“I would conclude that in terms of the application of the relevant legislation, the circumstances giving rise to the need for this Council to manage conflicts on interests of Mayor Ryan would seem to be minimal.”

Discussion of the issues at tonight’s meeting will be reported tomorrow.