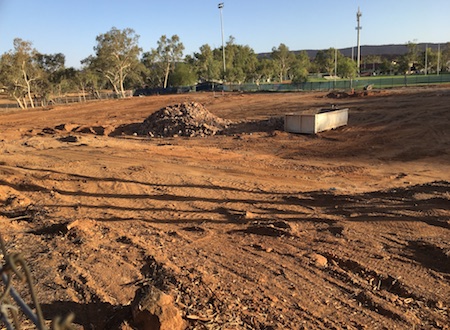 Minister for Education, Selena Uibo, can say with a straight face that the Territory Labor Government will “invest” $5.2m “in specialist infrastructure over the next 12 months to help support NT students with additional needs to reach their full potential”.

She is part of the  same government that has just finished demolition of the former Anzac Hill High School buildings, at a cost of $2m. The photo above shows where the school used to be, serving education needs for many decades. It was in a perfectly suitable condition to be renovated for further use.

Local historian Alex Nelson and many other heritage activists have made this clear, a view that is shared by the Office of the Independent Commissioner Against Corruption (ICAC).

The government, widely regarded as being bankrupt, has demolished the school without any clear idea of what it will use the land for.

Its “preference” is to locate the proposed National Aboriginal Art Gallery there but traditional custodians have rejected that.

Ms Uibo (pictured) says in a media release “projects under the new Building for Inclusion initiative that will roll out in select Territory schools include upgrades to special annexes and autism units at selected schools, acoustics upgrades to more than 20 classrooms and modifications to existing school infrastructure.

“The framework was the result of a key Territory Labor election commitment to invest $40m million over four years in early intervention, flexible schooling, and in supporting students with additional needs.”

The former Anzac High was used for St Joseph’s Learning Centre for young people with special learning needs, for a youth drop-in centre and a string of other purposes.