Solar cars are more than silent, fast and cheap to run 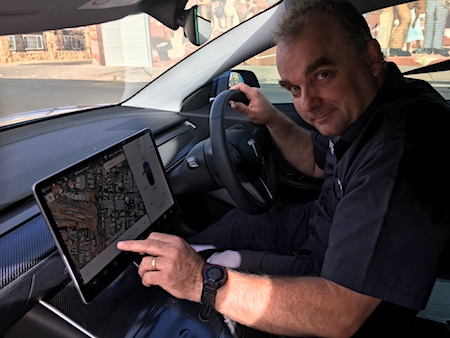 For Hunter Murray (pictured) electric vehicles in Alice Springs are a no-brainer: He and his company, Alicetronics Jaycar, have four of them between the business and his staff.

In the Tesla 3 the whole instrument panel is on a touch screen, including Netflix but that goes off when the car is in motion.

Two are little ones for around town, made by Mitsubishi 12 years ago (around $13,000 second-hand). 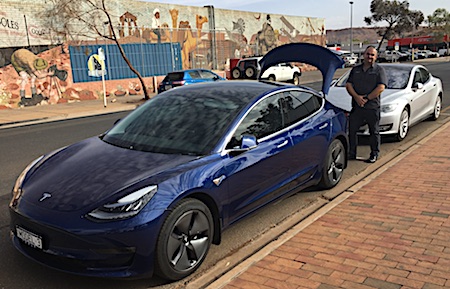 Mr Murray drives them between Alice and Adelaide without hesitation.

Recharging the battery happens during an overnight stop, in Coober Pedy or Glendambo, for a full charge, and three partial charges taking an hour each.

Fully charged the range is usually between 400 and 500 kilometres.

All roadhouses along the way now have some form of charging facility, thanks to the AEVA (Australian Electric Vehicle Association – in this game you have to get used to acronyms) and the roadhouse owners.

The Teslas have literally breath-taking acceleration, where the low speed high torque power of the electric motors come into their own: 0-100 in just over three seconds and tops 190 km/h.

All Mr Hunter’s cars are pure electric, not hybrids: “What’s the point of carting around with you 600 kilograms of fossil fuel engine which you don’t need,” he says.

Unlike combustion engines, electric cars can be re-fuelled in a number of ways.

• Slow charging from the grid, a powerpoint in your house, for example: 38 hours for a 400 km range (or just top up every night for daily use).

• Fast charging (AC) from the grid if three-phase power is available: Four hours for 400 kms. 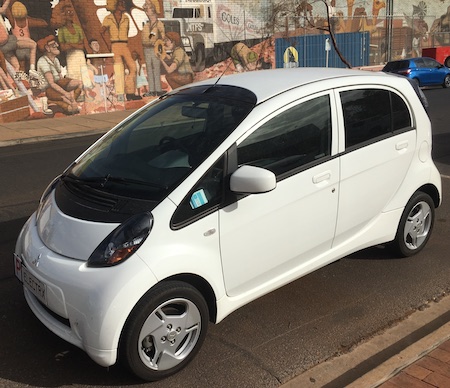 • From a 240 volt generator, diesel or petrol. Amazingly, in many cases this would drive the car further than if the fuel were used in an internal combustion car engine.

Of course, all of these are still mostly dependent on fossil fuel and cost money.

The real thing is using power from your own solar arrays and wind generation – after investment in the hardware, the energy is free of charge and free of pollution.

While Oz is still in a toe-in-the-water frame of mind, other countries have taken the full plunge.

In Norway almost 60% of cars sold in March 2019 were electric. The country will stop sales of fossil fuelled cars in 2025.

The case for BEVs (battery electric vehicles) put forward by Mr Murray and his co-enthusiast Richard Bentley is varied:–

With solar on the roof charging a BEV, and with V2G (vehicle to grid) technology, the car can be used as an auxiliary house battery while the car is not being driven (on average 90% of the time).

This may assist grid stability – frequently a problem in Alice Springs and other island grids.

The US firm Tesla is now manufacturing 1000 BEVs a week in China in a factory that took just a year to build, says Mr Murray, and the firm is looking to ramp that up to 5000 in a matter of months.

But is that enough? We need more manufacturers on the wagon, says Mr Bentley, and they’re coming in 2020.

Motor vehicle registration charges are in tens, not hundreds of dollars. Why? The charges are based on the cubic centimetres of cylinder space and, well, electric cars don’t have cylinders. 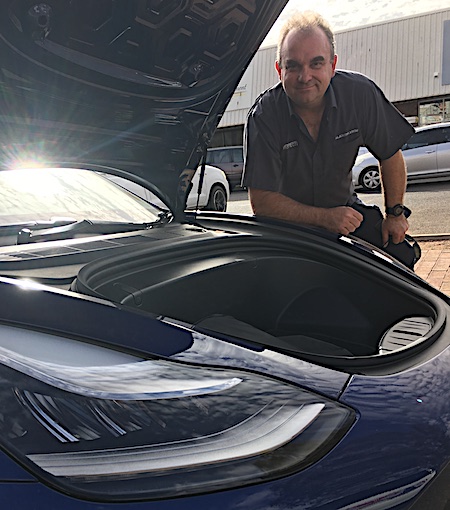 “PHEVs (plugin hybrid electric vehicles) are OK for short urban use (50km to 100km range). However, they have to burn fuel for longer trips and need heaps of maintenance still,” says Mr Bentley.

Under the bonnet? Room for luggage.

“We need to stop being dependent on foreign fuel as we have a perfect source of it here in Australia.

“It comes up every morning regularly and goes down every night, and we have the perfect technology to harness it without losing our standard of living. In fact, make it so much better in many ways.”

Mr Hunter’s Tesla Model 3 is the closest to a driver-less car I’ve been in.

It has eight cameras right around the car which – without human input – keep it between the lines on the road, maintain its distance from the car ahead, speed up or slow down as required, read speed limit signs and act accordingly, reverse-parks itself – plus a dozen other tricks.

These are constantly updated for free by over-the-air updates from Tesla, according to Mr Bentley. These cars are looking to be fully autonomous in the next two years, given government legislation.

The heavy battery is in the floor, giving the vehicle a safe low centre of gravity, improving handling, especially in emergency situations.

The batteries and their spectacular rise in performance and drop in price hold the key to the future of the EVs (electric vehicles), reaching parity to internal combustion engine cars in the next two years.

Says Mr Murray: “I’m always a bit of a skeptic until something is being mass produced, especially with batteries.

“However we are seeing the development of the million mile battery from Tesla, previously half a million life span.

“And this does not mean end of life. When degradation reaches 80% the batteries can now be re-purposed easily for stationary power wall type batteries.”