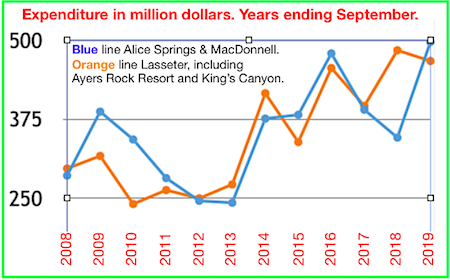 Tourist expenditure figures released by Tourism Research Australia (TRA) this week show that Alice Springs, including the MacDonnell region, have last year overtaken the Lasseter region, including the Ayers Rock Resort and King’s Canyon, measured in dollars spent by visitors.

This follows a slump starting in 2016 and bottoming out in 2018, reaching just short of the half billion dollar figure last year.

Meanwhile acting Tourism Minister Eva Lawler says visitor numbers to the Northern Territory were up by 6.7% in the year ending September 2019.

Spending $2.6bn, 1.95 million domestic and international visitors travelled to the NT on holiday, to visit friends and relatives, for business travel, study and employment.

Ms Lawler says interstate holiday visitors to the Territory, “a key target market for the Government’s Turbocharging Tourism investment,” grew by 8.9% for the year. 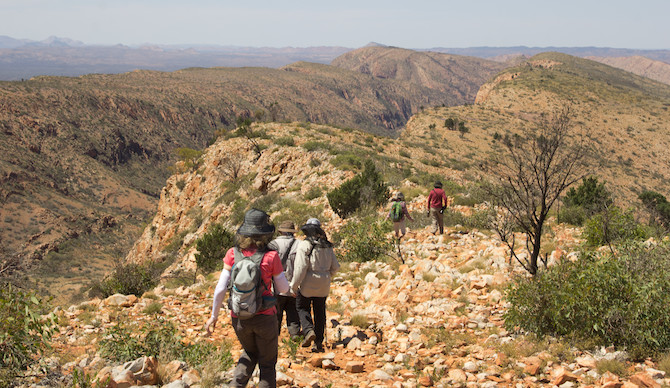 The results also show strong growth internationally, driven by increasing visitors from Japan and the US, with the NT performing second-best nationally in terms of international visitor growth, behind ACT.

“We are now working to build on these results and achieve our 2030 targets of more than three million visitors a year, accounting for $3.67bn in visitor expenditure.

“The devastating bushfires currently impacting many communities across the country will likely have an effect on people’s future travel plans,” says Ms Lawler.

Previously only landlines were used to interview, but mobiles were introduced in 2014.

2014 data and onwards should not be compared to previous years for domestic data due to the inconsistent collection methods.

The change in methodology has seen a break in series, so please use caution when comparing 2019 results with previous time periods.

Note also that 2017 and 2018 estimates have been revised to align with the latest release of ABS population projections and will differ slightly from previously published estimates.