HMAS Adelaide in Sydney Harbour at 4.30pm yesterday on the way to evacuate fire victims in the NSW South Coast. It had taken five days to get the vessel ready for the mission. Unbelievably it and Navy ships in general will not take on board children less than five years old. Going in the opposite direction is the kind of private pleasure craft that rescued Kangaroo Island victims, in South Australia, Little Ships of Dunkirk style. Photo by ERWIN CHLANDA who happened to be passing on the Manly ferry. 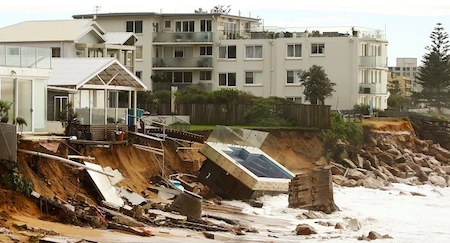 What does the NT and Federal governments’ DAMA II announced today have to do with the catastrophic bushfires in eastern and southern Australia? More than meets the eye.

It is an initiative now allowing skilled migrants to apply for permanent residency after working in the Northern Territory for at least three years.

So, while the north is starved for people, Australia is paying a horrendous price, in blood and money, for having jammed the vast bulk its population into a thin sliver around the eastern and southern seaboards, deemed to be safe and comfortable.

Well, much of it isn’t, as it turns out, and our thoughts must be with those who died and will die, who lost all their possessions, and with those fighting an heroic losing battle trying to stop the tragedy still unfolding. 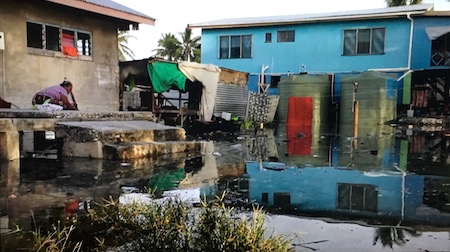 These words from the governments – state and Federal – will ring in our ears for a long time: “It is too late to leave. We cannot help you.”

Water is rising in a village in the archipelago of Tuvalu , from the three-channel video Tuvalu, 2016  by Angela Tiatia in the current exhibition Water in Brisbane’s GOMA.

When we’ve seen the fire and begin to see the rain, and when the horrific tragedy is over, we will need to recognise that we have reached a turning point as a nation: We must start looking out into our vast interior for answers.

The stalemate about climate change action will surely be over by then, but stick this word on your fridge door: “Retreat.”

Will people, governments and insurance companies be able to afford to fix the damage when, much more frequently and ferociously than before, fire and floods wreak havoc? It was a close shave already with New Orleans, remember?

Some predict that two billion of the planet’s seven billion people will have to retreat to higher, safer ground from their harbourside mansion in Sydney, or their island home in the South Pacific.

Time to look at a Town Like Alice: We’re 600 m high – never will a tsunami worry us.

We’re 1500 kilometres from the ocean – there will never a big cyclone.

We’re said to have the nation’s second highest percentage of people with tertiary education (Canberra has the highest, and currently one of the world’s most polluted cities). And so on.

But there isn’t any work! Piffel.

We have enough solar generation opportunity to relegate Arab oil to the stranded asset category of the planet.

But that will depend not on on clowns like Adam Giles and Michael Gunner, but on top class operators, and a change in the hand-out mentality, both by welfare recipients and government contractors relying on taxpayer indulgence.

And Aussies, not only skilled migrants, need venture out into the bush, getting for away from what has been shown to be no longer that comfort zone within cooee of the beach.

Then the current fire tragedy will not have been in vain.