To mound or not to mound? 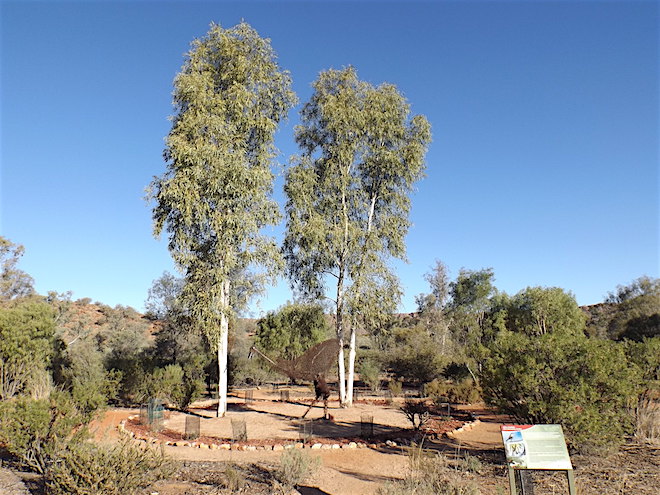 Planting into raised mounds is a good idea in places where drainage is an issue.

Not often the case in our neck of the woods. 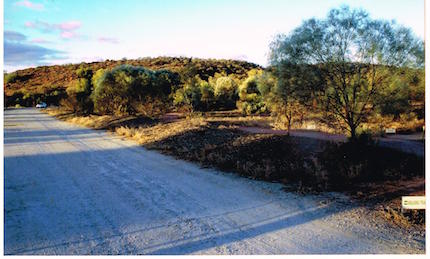 Veteran observer of the local environment and noted green thumb, Alex Nelson, recalls the persistent failure of plantings into landscape mounds installed at the Olive Pink Botanic Garden in the 1980s.

Barren landscape mounds along the driveway entrance to the OPBG in July 2006.

He was employed at the garden in the mid-2000s, when the curator, Colleen O’Malley, had the mounds removed. Mr Nelson set to work, assisted by Phil Hosking, to demonstrate his own planting methods.

He prepares large holes, level with the surrounding ground. He backfills the holes with the excavated soil mixed with shredded paper (dry leaf litter or mulch also work). This stimulates a response by soil-dwelling termites, which quickly invade the disturbed soil to consume the paper and leaf litter. 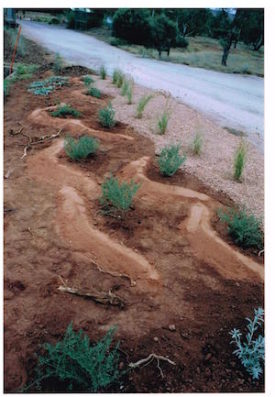 The termites’ tunnelling activity creates structure in the soil, enabling air and moisture to penetrate deep beneath the surface (similar in purpose to earthworms, with which most people are familiar). The new plants respond positively to these conditions, enabling quick growth and increased drought hardiness.

“Others make paper out of trees, I make trees grow on paper!” says Mr Nelson.

The method’s success can be seen in the plantings that line the driveway entrance to the gardens and perhaps most spectacularly in two ghost gums planted in the centre of the Barry Bucholtz Bird-Attracting Garden.

They were planted by Ms O’Malley using Mr Nelson’s method.

“Their growth has far outstripped the growth rate of all other ghost gums – some dating from the mid 1980s – established by more standard methods at Olive Pink,” says Mr Nelson. 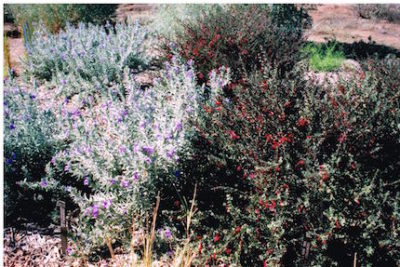 “In fact, it’s the fastest growth rate I’ve seen anywhere for this species.

“We’ve lost the Twin Gums west of town but now there’s a new pair at Olive Pink, rapidly established in response to a method devised in Central Australia and refined at the Olive Pink Botanic Garden.”

The spectacular display of Eremophilas and grasses one year on, June 2008.

The method is currently being used for the imminent planting of hundreds of new shrubs and trees at OPBG.

Below: The Barry Bucholtz Bird-Attracting Garden after one year, the ghost gums barely apparent, June 2008. 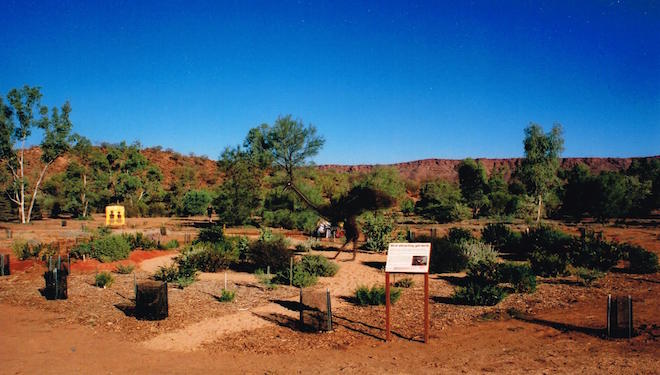