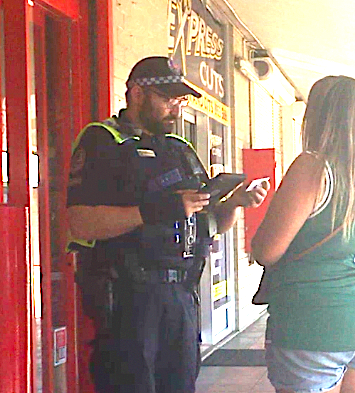 UPDATE, 13 November 2019, 8.27pm: A 28-year-old male Northern Territory police officer has been charged with one count of murder in relation to the Yuendumu shooting. As this matter is before the court, police will release no further information.

The shooting tragedy in Yuendumu on Saturday has its roots in the dual failure of the NT Government to provide adequate police and health services in remote areas, says the Independent Member for Stuart, Scott McConnell.

Armed police in Alice Springs making sure that the wrong person doesn’t buy a sixpack while health staff are fleeing remote areas where they don’t feel safe.

He says an investigation “at the highest level” is needed into why the government cannot deliver the “most basic services to remote communities”.

The under-resourcing or closing of bush police stations and the shutting down of clinics over the summer period in several communities of the NT, including Haasts Bluff, west of Alice Springs, need to be examined.

The two failures are clearly inextricably linked: If people don’t feel secure they will not take jobs in remote health services, a problem Health Minister Natasha Fyles has failed to cope with “from the get go” of this Parliamentary term, says Mr McConnell.

The killing of 19-year-old Kumunjayi Walker by a police officer last week was immediately preceded by the evacuation of the entire NT Government health service from the 800-strong community. And this in turn had been caused by the alleged attempted break-in into the home of a health staff member earlier last week.

Mr McConnell (at right) says this is depriving Yuendumu of any kind of immediately accessible health care for a full two weeks. The nearest services now are Yuelamu, which in turn will be closed over the summer, and the Haasts Bluff clinic, which will also be closed within a month, for the entire summer.

In Alice Springs that would be tantamount to shutting down the hospital, all doctors’ clinics as well as the ambulance and emergency services.

A long-time Yuendumu resident, speaking to the News on the condition of not being named, says the break-ins, car thefts and stealing from the stores, mostly by young people, some operating as gangs, have been out of control in Yuendumu for months.

Clearly, the urgent issues to be clarified by the government are: How come the police has been unable to stop that, or bring it under control; and secondly, what actions were taken to cope with the shut-down of all heath services for two weeks, starting the day before the shooting.

But that discussion is apparently not welcome by the authorities. In a self-serving appeal the police says in a media release: “There is a lot of public commentary especially on social media which could influence witnesses and not allow the investigation to run its full course.”

Mr McConnell says these issues need to be discussed by the public now, not when the coronial inquest is finally completed.

When Mr McConnell raised in Parliament the closing of the Haasts Bluff clinic he says the Health Minister was deceitful : “At the very time I was asking those questions they were actually advising the community that they were going to close the clinic. Every summer that clinic has closed since Ms Fyles has been the Minister, and she intends to do it again this summer and this is why I was raising questions in Parliament, to which I did not get an answer.

“I don’t intend to communicate with this Minister because I know she does not tell me the truth. I am getting my information from my networks in communities.”

Mr McConnell says it is clear that the government is “systematically” denying services to the bush. This will leave residents no choice other than to move to the big regional centres.

“If the plan is to systematically withdraw these services, well, tell me that’s your plan, and then also tell me what you are doing to prepare Alice Springs and other regional service centres to be ready for these influxes of people. Just tell us!