Above: Council is hoping to get access to recently trashed former visitors’ centre as a space for the library’s youth programs, easing pressure on the library’s main facility.

UPDATE 12 November 2019, 12.22pm: MLA Dale Wakefield has this morning released an additional piece of correspondence, pursuing her suggestion of the Mayor’s conflict of interest and calling into question the role of the former council CEO in negotiations over the gallery. See details at bottom.

The doors have opened a crack on the ongoing machinations about the possible location of the proposed national Aboriginal art gallery and are set to open wider with Town Councillors pushing for all correspondence between council and the NT Government on the issue to be brought out of confidential.

A new public library is still being used as a pressure point in the government’s negotiations with council, as the over-crowding and behavioural issues at the library become acute.

A letter from MLA Dale Wakefield, under Minister for Territory Families letterhead and dated 8 November, to Mayor Damien Ryan and his reply of yesterday reveal the following:-

CEO Robert Jennings is preparing proposals, including designs, that will allow, in Mayor Ryan’s words, councillors to make “a milestone decision to allow the project to progress on Council land or not”.

The designs were shown to Cliff Weeks representing the NT Government in a meeting with Mr Jennings which Mayor Ryan also attended. (Among his many attributes, Mr Jennings is a qualified architect.)

This seems to have irritated Minister Wakefield, who notes that the proposal was not “formally provided” to the NT Government and was not confirmed as “formally endorsed” by the Council.

In any case, her government is only interested, she wrote, in talking to council as owner of land within the CBD that may be suitable for the gallery: “At no point have we sought design or other project-related proposals from Council, given it is a NT Government-initiated and funded proposal.”

Mayor Ryan explained in reply that the designs are “only associated with enabling Council and other key stakeholders to make an informed and solution focussed decision”.

Mr Jennings, who tabled the correspondence at last night’s committees meeting, told councillors that the results of his “negotiations” will be presented to them at a meeting on December 6, a Friday and outside the schedule of regular meetings with elected members.

Minister Wakefield’s letter also raises the Mayor’s “potential conflict of interest, particularly when putting forward proposals purportedly on behalf of Council,” given his candidacy in next year’s NT election.

She refers to having raised this issue previously in a letter dated September 6 [she has since released this letter, see update below] about a meeting called by council with the “Todd Tavern Consortium” as well as herself and Minister Lauren Moss, and request a “formal response” from the Mayor. (See our coverage to date of dealings with the “Todd Tavern Consortium”.) 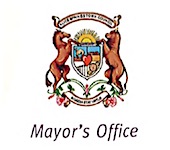 The Mayor’s reply rebuffs any suggestion of conflicts of interest, saying “it is my and Council’s love of Alice Springs and its community that drives us to continue work on this project despite its challenges”. Further, he says he is allowed under the Local Government Act to run for Legislative Assembly election and  has “demonstrated an ability to observe over my many years in public office” the Act’s conflict of interest provisions.

Councillor Eli Melky, describing the correspondence as “becoming a silly tit for tat,” said all correspondence between council and the government should be brought out of confidential.

Cr Jamie de Brenni agreed, saying he respected the work Mr Jennings has been doing, and that the correspondence contains information in the public interest.

Mr Jennings, who is keen for council business to be conducted more openly, asked councillors for time to review the correspondence to make sure there would be nothing in its release that would be in conflict with the Local Government Act.

Cr Jimmy Cocking saw the Minister’s letter as making ”pretty clear where council stands” – dealt out of the story. Or had they dealt themselves out?

However, Cr Marli Banks had a different take. Despite Minister Wakefield’s reiteration in the closing paragraphs of her letter that the government’s sole interest in talking to council is about accessing land that council owns, Cr Banks said the letter gave her “hope” that options remain open to partner with government, to deliver the gallery and to develop the library.

On that front, the meeting revealed that council is in negotiation for the lease on the former Tourism Central Australia building (pictured at top) that stands on the Civic Centre block but is NT Government-owned. It is seen as a possible space for running the library’s youth programs thus easing pressure on the over-crowded main library building. 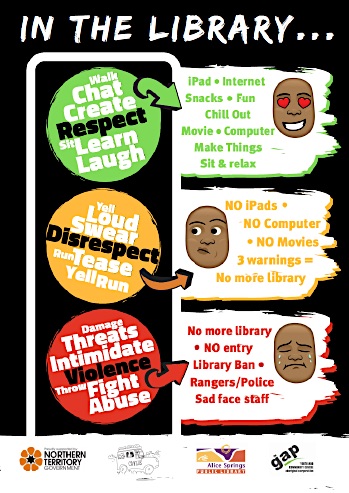 It is a long-standing resolution of council to build a new library and we know that it was part of the quid pro quo in the NT Government’s land swap offer to council. Clearly Cr Banks sees that as still in play.

Meanwhile, council has obtained a grant that will allow it to engage a specialist consultant to advise on the library’s usage, programs and options for the future. This advice will not go to design but will include an assessment of space requirements. The consultant’s report is due next March.

Left: The library is one of the town’s most inclusive spaces but its ‘Library Rules’ poster is directed at just one demographic.  Don’t these rules apply to everybody?

A “Library Security Officer” has  been employed for a six-month trial, replacing a permanent ranger presence, which had not been received well by some members of the public. It also had unintended consequences of heightening behaviour from some young people, while undermining the Youth Team’s positive engagement with them.

A full Safety and Security Review report on the library was provided to councillors in the confidential section of last month’s committees meeting. A summary of issues, recommendations and actions undertaken was available in the open section papers for last night.

It reveals the library as a much sought after gathering space for young people – its attractions including air-conditioning and power-points to charge their digital devices – and some of the problems that flow from that. They are most acute from 2-5pm weekdays, before the youth centres open.

Simplistic solutions such as capping numbers when the space becomes over-crowded and enforcing “no school / no service” rules are not the answer, according to Manager of Library Services Clare Fisher.

Cr Melky argued for “no school / no service” rules in any council facilities and programs,  but Cr Glen Auricht countered with a heartfelt plea for understanding of young people who, “through no fault of their own,” have missed out on an education and have reached an age where they are “too embarrassed” to go to school. He sees the library as having a role for them, as a safe place where they have access to computers and get some education “on their own terms”.

The report to council by Ms Fisher pointed out that public libraries have “no precedent” for capping customer numbers and that council has an existing commitment to ensuring that the library operates inclusively, opposed to “racial profiling and excluding at-risk young people”.

All these issues will be further explored, said Mr Jennings last night, in a report exploring “council’s appetite in the youth space” and in the development of its Master Plan.

UPDATE 12 November 2019, 12.22pm: The letter dated September 6 from Ms Wakefield is under her own letterhead, but she is writing as the Minister given responsibility to conduct negotiations with the council over use of the Civic Centre site for the proposed gallery, a possibility taken off the table in mid-September, as far as the public knew.

Ms Wakefield refers to correspondence from former CEO Rex Mooney dated much earlier, 27 June, saying that council did not see its way clear to accepting the government’s offer on the site and instead was initiating a meeting with the government, the Alice Plaza, the Todd Tavern and Traditional Owners.

She and Minister Moss attended the meeting by teleconference.

Her letter reiterates concerns, expressed at the meeting itself, about its commercial nature, given that the developers were present.

She says there was a lack of clarity around what council was trying to achieve in the meeting and again raises the Mayor’s possible conflict of interest.

The letter reveals the government has been in discussions with the Consortium since February 8, 2018. The letter also notes her concern that council does not seem to have become aware of those discussions until June 24, 2019 despite former CEO Rex Mooney having been present at the very first meeting and being aware of further developments in the interim.

The Alice Springs News will seek comment from Mr Mooney.

“I was indeed briefed in strict confidence by a representative of the consortium about the Todd Tavern proposal which I was clearly informed was the subject of ongoing confidential discussions with the NT Government.  With the Mayor’s concurrence I subsequently arranged  for the consortium to meet with Elected Members for a formal confidential briefing.”