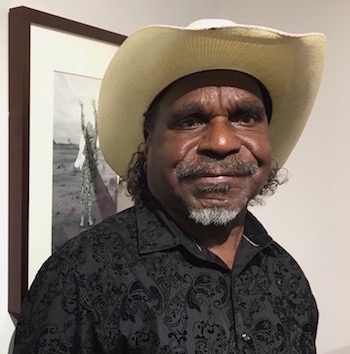 Police should have used a taser or handcuffs, not a gun, shooting “like a dog” 19-year-old Kumunjayi Walker who was fatally injured in Yuendumu last night. (As a freshly deceased person first name his not permitted to be spoken under traditional law.)

The police officer who fired the shots “will be labelled for the rest of his life as a blackfeller killer,” says Otto Jungarrayi Sims, a prominent senior man in Yuendumu.

He is chairperson of Warlukurlangu Artists, which he describes as a vibrant business and an artist himself, as well as cultural performer. He also provides cultural liaison services, working with documentary film makers, travelling all over the world.

Mr Sims says the tragedy has stopped in their tracks efforts to plan the future of Yuendumu: “The community is devastated. It needs answers.”

Kumunjayi had breached parole, “but they should use a taser, or handcuffs, either way, not the third option, the gun.

“I have never seen it before.

“The gun will put you in a different course. You’ll be searching for ways to get out from that mess.

“The police used the gun but they won’t fix up the mess, they left a big mess. They shot someone. A black man,” says Mr Sims.

“Australia is reeling from this. A black man got shot at point blank range, like a dog, it’s no good.

“We are not in America. This is Australia.

“There were two police cars. I was sitting in my sister’s place around, six, seven. Two police Hilux whizzing past, with the lights on.

“There was something wrong. Next I got a call from someone. He said someone got shot.

“That was really bad, bad, bad. I still don’t believe it. Is this real?”

What does he expect the police to do now?

“There’s a lot of soul searching, looking at ways to reconcile with black people.

“This is not America. This is Australia. What they have done last night will hound them for the rest of their lives. 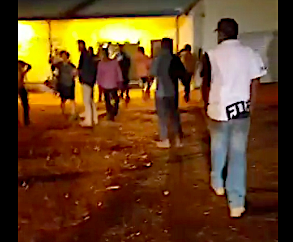 “Especially in the 21st century, when we had high hopes, us people in Yuendumu. We were going to plan for the future.

“We were going to have a meeting on Monday the 25th of November, a meeting about our future, to work, to build our community, to have law and culture and respect.

“Embracing one-another, including non-Indigenous people, working together, to make the community a better place to live.

“We talked about having a voice, a voice in the 21st century, a strong voice, you know, respect, including a good relationship with the police.

“But what happened last night, we have to go back to square one. Start all over again. I am devastated.

“We had someone shot by a cop. As an artist, how can I heal that wound, you know? I just want to keep the culture strong.”

Mr Sims says about the aftermath of the shooting: “We told our young people don’t get angry, don’t do anything silly.

Mr Sims says the relationship with police in the community has changed: “We need mature cops in our system.”

In his experience, do the police make an effort to understand an Aboriginal community like his?

“I know a lot of cops who worked with these communities for a long time.

“They have been so good. We’ve been friends. A lot have gone back to Darwin, Melbourne, Sydney. They are the good ones. They know how to diffuse problems. There are good cops.

“But this was a cop with a problem in his own house, maybe. That’s what everyone is talking about, yeah. He had a problem and the only way to get his problem out was to shoot a black man.

“There is a lot of soul searching, we just had a meeting with the Assistant Commissioner [who had flown in from Darwin]. He said they will do everything in their power to do what’s good for the community. They will have an investigation.

“Everyone was so angry. We are angry. How would you feel if some white person was shot? We had to tell the young people to stay calm, and listen. The only thing we ask for is justice. We need justice.”

What happened when the Assistant Commissioner arrived?

Mr Sims (pictured at left speaking to the royal commission into juvenile detention): “Everyone was a bit angry. There were mixed feelings. Is it right to talk to the commissioner? Second thoughts. Is it good to trust the police after that incident?

“We have no choice but to listen to the elders and the best way is to get justice done for that young Kumunjayi.”

What’s the difference between the old police officers and the new ones?

“The old coppers were good, all mature cops, they’d been around, working in communities.

“They know the law, they know the cultural side of everything, they know how to approach [people]. They had a good relationship with the people here.

“The new ones, the young ones – maybe their uniform makes them tough. So they shoot a black man.”

Do they go out into the community, talk to people and find out about their culture and traditions?

“No. They don’t. Not like the old coppers. We just need answers, you know.”

What promises has the Assistant Commissioner made?

“[The incident] sends a message about the police force. They will be known as black killers, you know. They will be remembered as blackfeller killers.

“There are good cops, there’s bad ones. This young fellow who shot that Kumunjayi will be labelled for the rest of his life as a blackfeller killer.

“We need to speak the truth, in order to save the young ones, so that another black man won’t get shot. That’s why I talk the truth,” says Mr Sims.

Meanwhile a police media release gave an account of the events.

“Investigations are continuing following a death of a man in Yuendumu overnight.

“At approximately 7.15pm two police officers attended a residence within the community and attempted to arrest a 19-year old male for alleged property and assault police offences.

“An altercation has occurred between the male and one of the officers, resulting in an officer being stabbed in the shoulder. That officer has subsequently discharged his firearm wounding the man.

“First aid was applied at Yuendumu Police Station but the man died a short time later.

“Additional resources and support services have been deployed to the community to maintain calm and work with residents through this difficult time.

Meanwhile the Police Association says in a media release that it is in Alice Spring providing support to officers involved in the shooting.

“Our brave officers who have encountered what was evidently a very volatile and unpredictable situation – including a member who is being treated for injuries sustained during the incident.

“The stark reality is the risk is always there and officers are forced to make a split-second decision about how to respond, to protect themselves and others.

“Information released by Acting Deputy Commissioner Michael White demonstrates our members were executing their duties in a dangerous environment.”

The man who died in Yuendumu on the weekend was not on parole. I understand that police were seeking to arrest him in relation to alleged breaches of a suspended sentence.

I have been told a police officer made the comment about parole during the weekend and, after it was learned he was in fact not on parole, the police tried to correct the record but given the speed of reportage the wrong information had already been published in numerous locations.

The Central Land Council (CLC) says in a media release the family of Kumanjayi Walker deserves an inquiry without delay that is independent of the Northern Territory police, fully transparent and thorough.

During a rally outside the police headquarters in Alice Springs today, CEO Joe Martin-Jard said the family needs to learn the truth as soon as possible, according the release: “We want full transparency, we want to see the body camera evidence, we want it out in the open.

“I call on the coroner to have this inquiry at Yuendumu and give families the chance to talk to him.”

CLC deputy chair Barbara Shaw is quoted in the release that the shooting came less than two weeks after a constructive discussion between the CLC delegates and a high ranking police officer at Yulara Pulka outstation.

The death of a teenager in custody and the stories she hears nightly from young people in her care have shaken her confidence in the ability of the police to repair their relationship with remote communities any time soon.

She is quoted as a person who’s supposed to be “building the relationship between the police and our people but now I feel very disappointed.

“This coroner’s report has to look at the police and all the health and social issues that have contributed to the death,” Ms Shaw is quoted in the release.

Responding to questions form the Alice Springs News, police say the officer was “stabbed with an edged weapon. The information about the type of weapon forms part of the investigation into the incident and the report to the coroner.

“The officer was treated at Alice Springs Hospital.”

The Police Association says it is is appalled by recent “irresponsible” social media posts.

According to a media release president Paul McCue is in Alice Springs and has spoken directly with the officers involved.

It is incomprehensible that nothing more than innuendo and rumour is being posted on social media, while an active investigation is currently underway into the circumstances surrounding the shooting, he says.

“These officers are highly respected members of the police force and have served the community of the Northern Territory, including Central Australia, for some time.

“It is time for calm. We must respect the formal investigation process into the circumstances around this tragic event.”