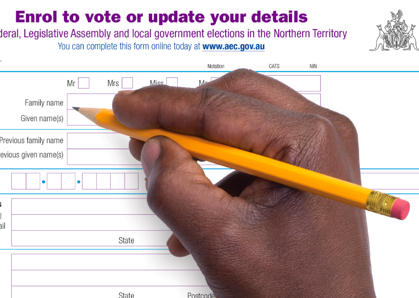 Possibly the greatest challenge for the NT Electoral Commission in the run up to next year’s election will be getting more Territorians to enrol and then to vote, says the commission in a media release this week.

This is particularly the case in the remote regions and with Aboriginal Territorians, with the black hand in the enrolment propaganda (pictured) clearly a logical choice.

There has been a growth in enrolment since the 2016 election in urban divisions, increasing by 4,993.

This and the sheer size of some electorates pose some serious questions about the functioning of democracy in the NT: The new seat of Gwoja (pictured), replacing Stuart, is bigger than Germany and has a projected number of 5489 enrolled electors. Nowhere near all of them will turn up to vote, of course.

As at September 30 Australian Electoral Commission (AEC) figures show there were 140,064 on the electoral roll with just over 26,000 eligible Territorians who are not enrolled.

This equates to just 84.9% of eligible Territorians enrolled compared to a national average of 96.8%.

While the NT accounts for less than 1% of the national roll we account for over 5% of the electors not enrolled, says the release.

As at June 30 there were over 16,000 eligible Aboriginal Territorians not on the electoral roll.

The estimated enrolment rate of Aboriginal Territorians is 68.2%, this compares to a national enrolment participation rate of 76.6%.

Since January there has been almost 4,000 new enrolments in the Northern Territory with just under half of those recorded in the months leading up to the May 18 Federal election.

As a number or percentage there are more Territorians on the electoral roll than ever before.

At the 2016 election there were 135,506 enrolled Territorians representing 83% of eligible electors.