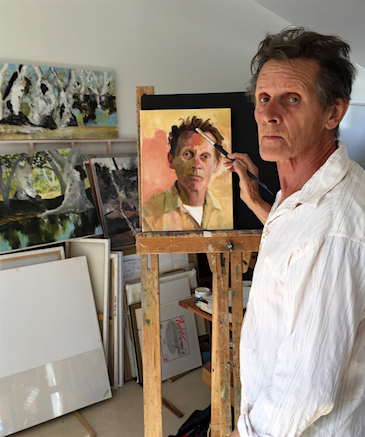 By KIERAN FINNANE
This is a slightly edited version of my opening night talk.


A large drawing by Henry Smiith of a valley in the East Macdonnell Ranges hangs in the lounge room of friends. It has a mesmerising quality, pulling your eye in to its detail and spaces, its presence, into a kind of communion with the drawing, the valley, the artist.  On it Smith has written this inscription: “You draw it searchingly, each rock, each surface, each crack, each shadow, you are one with it now, as familiar as your mother’s face!”

Right: Henry Smith in the studio with a self-portrait.

It’s a lovely expression of the intimacy that arises from intense looking. Beyond the way it might bond the two of you, artist and subject, it’s about the kind of observations that looking might allow you to make, ever more detailed and insightful with the skilled hand following the penetrating eye. And it’s also about what comes back to you, the one who looks, what you are open to receive.

It’s a dynamic process that Smith refers to in his title for this show as “chemistry”.

It’s interesting to think about this process in relation to country, as Smith seems to direct us to when he invokes his mother’s face in relation to that landscape drawing. The process speaks directly to the thinking that is gaining ground about country as sentient, about its personhood that we can love, cherish, protect, mourn as we do the beloved humans around us, about country’s ability to communicate if we are open to receive.

While Smith has been better known to us as a landscape painter, I think we can question the division – landscape artist / portrait artist – if we shift the focus from object to process and realise that what is on offer is about a kind of intimate engagement that arises from intense looking with an open heart and senses. And that we could think about landscapes of the human face and body, and of portraits of country – something that Jennifer Taylor has also explored in recent work. 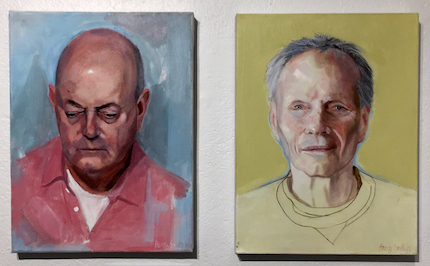 It needs to go two  ways, of course. I realised this after I sat for Henry the first time. In the portrait that resulted I recognised a self that I’ve sometimes seen in photographs, where I’ve felt the camera’s gaze on me, become self-conscious, and a kind of curtain has fallen on the possibilities of exchange (often resulting in closed eyes, which is quite telling). These kind of images, even with eyes open, are records, rather than portraits.

When we tried a second sitting, I was more habituated to the situation, less fearful, for one thing, that I would find it trying to sit and ‘do nothing’. I’d discovered first time around that it actually didn’t feel like doing nothing, that to sit still and quiet was in fact doing something, an opportunity for serenity that I rarely give myself. I also consciously knew that I wanted to offer something more open to Smith’s gaze and was in a better frame of mind to do that. 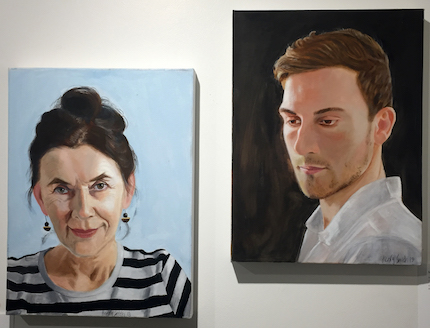 This doesn’t mean that you have to have an eye to eye exchange for that two-way dynamic to be working. The moving portrait of Russell Goldflam shows that. His eyes are cast down but rather than a curtain falling, it has lifted – on the weight he was carrying from his many years as a criminal defence lawyer, exposed more than most to the tragedies and frailties of the human condition.

Right: Smith’s portraits of myself (left) and Matt Grant.

We can also see in this gathering in the gallery, where there are multiple portraits in which the same persons have participated – Smith and Valmai McDonald, for instance, Smith and Sue Grant, Smith and Smith –  how the exchange is not exactly reproducible, that at each sitting something different occurs. Interestingly, the contrast is the sharpest in the two self-portraits, and I have wondered if that isn’t because Smith the painter had the upper hand, interrogating himself sternly in the one (below), but perhaps asking in the other (on the easel, top), which lands far more uncertainly, how well and far you can know yourself. The difference between the two is an expression of the contingency and unending process of knowledge, whether it is of self or others, whomever those others may be. 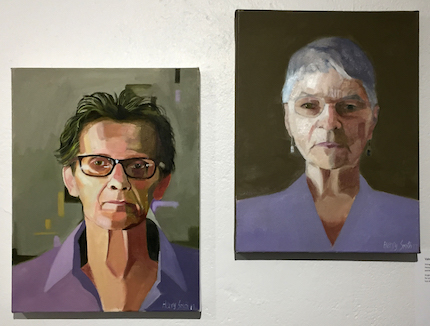 One last thought is about the gathering itself, all those dear faces, for that is how they feel, whether we know them individually or not, with that accumulated intimacy that Henry has been able to share with us, that allows us to recognise a community that we are part of.

Left: Smith’s portrait of himself and Valmai McDonald.

Character and chemistry: a portrait of community is showing until 10 November at at the June Marriott Gallery, Central Craft.

Artist’s meditation on the East MacDonnells