Home Issue 17 Heritage Act: not worth the paper it is written on
Issue 17Volume 25

Heritage Act: not worth the paper it is written on 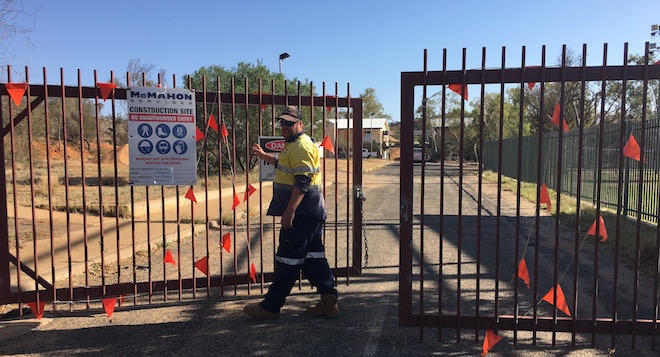 Above: A McMahon’s employee opens the gates to the old school this morning to allow a company vehicle to exit, after which they were locked again. McMahon’s has the contract for demolition of the building, worth $1,893,389.38. No sign of the bulldozers this morning however.

From a lonely battle of one, the fight to save old Anzac High – which last Friday looked like it was over – reignited this morning with a ritual burning of the Heritage Act outside the locked gates of the site. 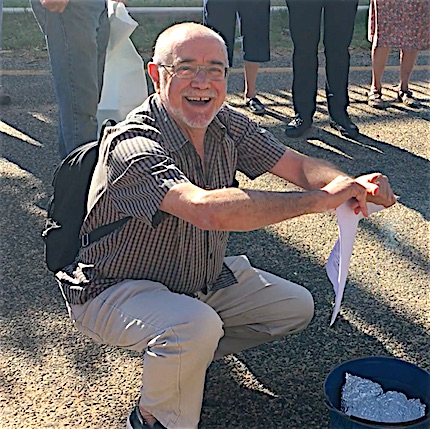 “Not worth the paper it is written on,” declared veteran heritage campaigner and specialist architect Domenico Pecorari in front of a small but ardent crowd.

Left: In the wind, the flame didn’t catch, so Mr Pecorari proceeded to a ritual tearing.

They included, of course, local historian Alex Nelson, a member of the Heritage Council, who nominated the site for heritage listing and has been conducting a fairly solitary campaign to at least get the case for listing put to the public. (The Heritage Council, in an act of apparent anticipatory compliance, given the government’s plans for the site, declined to recommend its nomination. This put a stop to public consultation on the nomination).

To Mr Nelson’s enormous credit and satisfaction, after a snap decision yesterday to meet at the gates this morning, among others to turn up were:

A student of the first intake of the school, John Hagan.

Former principal of the school for 23 years, John Cooper.

Current MLA Scott McConnell, formerly Labor, standing for Braitling as an independent in the next election. 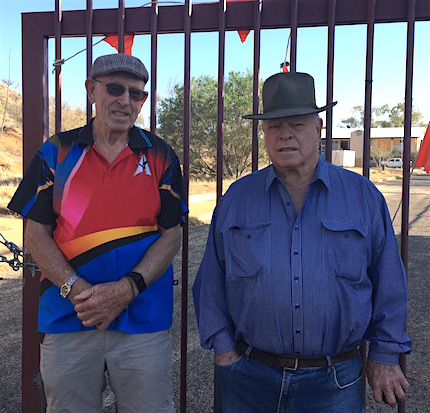 Veteran heritage campaigners Mike Gillam and Jose Petrick OAM who, together with Mr Pecorari, were key figures in the battle over almost two months to save the old Alice Springs gaol (it ended in victory and the gaol now houses the invaluable Women’s Museum of Australia).

Left: Former school principal John Cooper and former student from the first intake in 1953, John Hagan. The school was still being built around them, recalls Mr Hagan; his first classroom was in the what became the boys’ toilets.

And another veteran, Evelyne Roullet, who recalled an earlier battle that did not end well: she was one of a small band who maintained  a vigil chaining themselves to a beautiful gum tree that was slated for felling to make way for the new Todd Mall. Then Chief Minister Paul Everingham promised that it would be saved, she says, so the campaigners went home, and the tree was bull-dozed that night.

There was no sign of bull-dozers at the school site this morning, despite indications from public servants (via the government solicitor) last week that they would be starting work today.

Given the hollow promises, betrayals of trust and bloody-mindedness that have marked many past heritage campaigns and the record of the government to date on this site, the gathering this morning do not hold high hopes for saving the Anzac High building but they intend to do what they can to make those involved in the decision-making wear the cost.

This will include Mr Nelson’s pursuit of his case before the NT Civil and Administrative Tribunal, with the next hearing scheduled for 1 November. 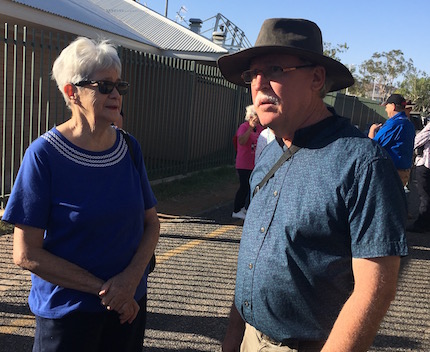 Before putting a flame to his copy of the Heritage Act, Mr Pecorari pointed to some of its deficiencies. Among them the narrowing of criteria for what is considered a heritage place, including the elimination of “social value”, dropped  when the act was rewritten in 2011.

This was about preserving places “highly valued by a community for religious, spiritual, symbolic, cultural, educational or  social associations”.

Right: Former MLA Loraine Braham talking to Alex Nelson. Mrs Braham urges those who care to write to their representatives, something she does quite often.

He also pointed to a rule that prevents a place being nominated for listing for five years after its listing has been rejected by the Minister.

At present, that leaves the following important heritage sites all vulnerable to destruction – “on death row”, as he puts it: 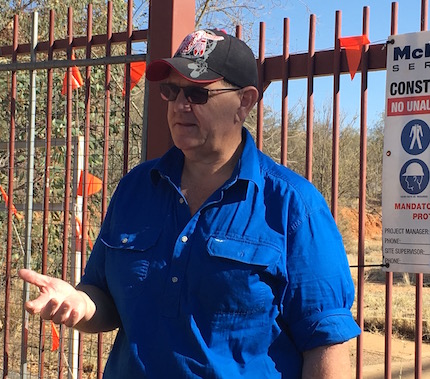 All have had their listing rejected by the Minister because of the objections of owners, social value be damned. And all are still within the five year time restriction on re-nomination.

Mike Gillam is passionately committed to repurposing old buildings and has achieved outstanding results doing this with imagination and flair at the small, characterful precinct around 8 Hele Crescent.

Right: Scott McConnell, the only elected representative of any tier of government to turn up this morning.

He spoke of a “certain kind of madness in the air when governments talk about demolishing huge sound structures, carting them off to the dump – forget about your carbon footprint – and building something new.”

And we’ve seen how that “madness” can end, as Mr Hagan pointed out to the Alice Springs News: “Look at the Melanka block,” was all he needed to say. Its demolition was the decision of private owners but allowed for by our poor planning processes. This prime land has been vacant now since 2008, more than a decade. The only thing happening there is that its trees are dying.

Mr McConnell, also speaking to the Alice News, offered an explanation for the government’s obstinate insistence on demolishing the old school.

Council has rightly rejected relocation to the site, he said, so the government’s only relevant project on paper is the proposed national Aboriginal art gallery. 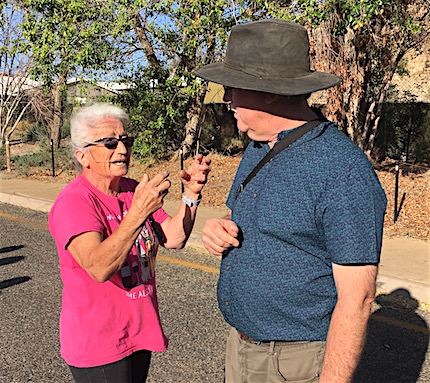 For the gallery to work it has to have the oval, which after a strong public campaign, council has declined to make available to them.

There is now talk of compulsory acquisition, and if that’s what they’re thinking, they should tell the people of Alice Springs.

Right: An old hand at ‘locking on’, an activist tactic that some Australian governments are trying to ban: Evelyne Roullet speaking to Mr Nelson.

“Take that to the election,” says Mr McConnell. “Tell them, you’re the Chief Minister, you know better.”

He suggests that behind-the-scenes discussions between Ministers and private developers are in play.

He understands the developers want to redevelop a precinct at the northern end of the mall, possibly including old Mobil Palms,  the Alice Plaza, and the Todd Tavern block, which would be linked to the development of the Anzac precinct.

“That’s why they are so hell bent on this location,” he says. “They’ve got deals that I think are dodgy, and if not, they should come clean on them.”

Mr McConnell also challenges the government’s “social licence” to build the gallery, with big unresolved conversations about its location that should be fully explored.

Below: Still fighting, in the foreground Jose Petrick OAM this morning. Her Medal of the Order of Australia was awarded for her service to “the preservation and recording of the history of Alice Springs”. With her, from left to right, Margaret Hewitt, Jill Brew, Olga Radke, Loraine Braham, and Claire Sproule. 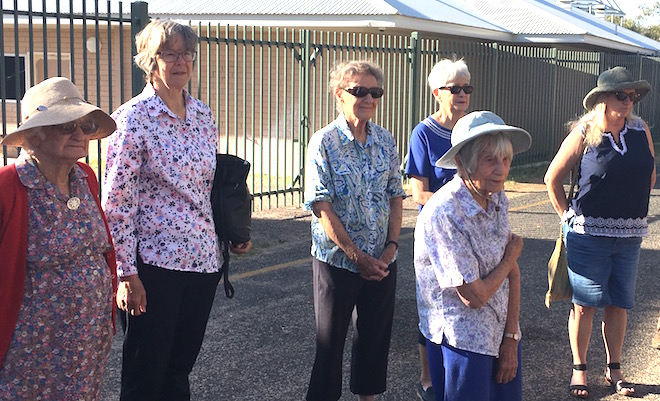