When one of the world’s great tourism adventures, climbing Uluru, will be stopped in a week’s time, news media covering the closure will be operating under a regime akin to a totalitarian state: A public servant will have the power to declare what is news and what is not.

As the Uluṟu–Kata Tjuṯa National Park, Commercial Image and Media Capture Handbook makes clear, “News of the day is declared by the Director of National Parks or a nominated representative.

“For coverage of events that are not classified as news of the day, media organisations need to apply for a permit, licence or accreditation.”

That means if a journalist uses her or his news judgment to cover something the director has not deigned to declare as “news of the day,” a permit will be required that may oblige journalistic images to be submitted for approval by Parks Australia, which is part of the Federal Department of the Environment and Energy. 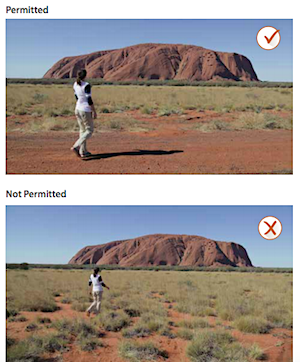 “Ensure you follow the protocols for working in the park, otherwise your image or footage may not be approved for use.”

“Only shooting from marked tracks and roads means you’ll also have a greater chance of your images being approved.

“Compositing or photoshopping images is not permitted – you must represent the features of the landscape true-to-life.

“Contact Media Office to assess and approve [an] image.

“By obscuring [restricted features of The Rock] behind a bush, tree, person or subject, the detail of the sacred site is then hidden and would be approved.”

Absurdly, none this applies to the plethora of images of the event that will be flooding the world’s social media, especially as thousands of visitors are rushing to The Rock for a last chance to climb, making a mockery of claims that it it not hugely in demand: “If you are an amateur photographer or visitor taking or sharing images or footage in or of the park for personal use and not for commercial purposes, you do not have to follow the Guidelines,” says the handbook.

But professional media are subjected to a string of restrictions, making large areas of The Rock and Kata Tjuṯa off-limits:

“Do not show sensitive sites. Reduce contrast and lighting to hide the detail of the shot.”

The northeastern face cannot be filmed or photographed at all (at right: shaded section shows that area).

All five domes of Kata Tjuṯa (the Olgas)  must be shown from the viewing area to the south.

Images from the west must include at least three complete domes.

Both sides of the gorge must be in the shot at all times.

Filming for commercial purposes is banned in the Valley of the Winds.

There is more media manipulation: The Alice Springs News has learned that statements from Sammy Wilson, chair of the park’s board of management, are being pre-packaged by Parks Australia, rather than Mr Wilson being present to take questions from journalists.

The News emailed emailed Parks media on October 12 requesting an interview with Mr Wilson. We’ve had no response, not even an acknowledgement of the email.