Police want to speak with this man 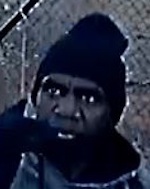 Police have released these images of a man they wish to speak to in relation to four unlawful entries and an attempted unlawful entry on properties in the Araluen and Larapinta area which occurred between 5pm and 8pm on Wednesday.

At around 5pm an occupant of a house in Taylor Street returned home to find a man standing in the kitchen. He fled the house when disturbed.

During the unlawful entry of a property on Terry Court around 5:20pm, a man of similar description was seen inside the house. He fled into nearby bushland on being disturbed.

Occupants of a home in Murray Street returned home to find their property had been unlawfully entered sometime between 5:45pm and 6:35pm.

Police received a report of a man of the same description looking into houses on Gilbert Place in Larapinta around 8pm. A white Nissan Patrol station wagon with NT Registration CB65DJ was later reported as stolen from a home nearby.

The man is of Indigenous appearance with a slim build, clean shaven and aged in his late 20s to 30s.

The man is described as wearing a grey/black jumper, black track pants, black gloves and a dark coloured beanie and small black backpack.