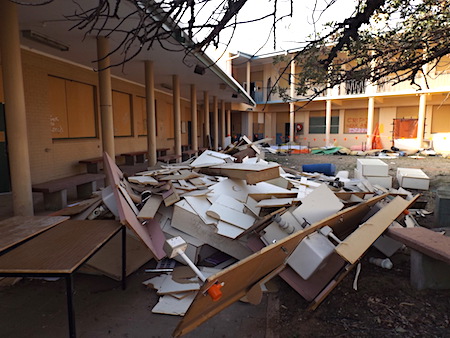 Local historian Alex Nelson says he is taking legal action to halt the demolition of Anzac Highschool which has already started.

Mr Nelson has made an application to the NT Civil and Administrative Tribunal Act [NTCAT] to examine irregularities within the NT Heritage Council, of which he is a member, in the assessment and ultimate rejection of an application, by him, to protect the school by listing it.

He is also calling on MLAs Scott McConnell and Robyn Lambley to initiate an independent judicial inquiry into the issue.

At the end of a detailed submission to the tribunal he writes: “It is perfectly obvious that throughout the entire period of this process my nomination for heritage listing … has not been treated fairly or dispassionately but rather all effort has been directed towards achieving an outcome in line with the Government’s intentions towards this site.”

In his submission Mr Nelson (pictured) says, in part,  that in late 2017 the NT Government announced the former school as its preferred site for the proposed National Aboriginal Art Gallery.

“I was immediately concerned about implications for the heritage value of that site” and he nominated it as well as  the adjoining oval for listing.

The oval has since been the subject of a proposed deal between the Town Council, which owns it, and the NT Government. The deal did not proceed; nor has an alternative deal to acquire the council’s Civic Centre block.  According to government sources the government is now considering compulsorily acquiring the oval.

Mr Nelson says he has made several approaches to government instrumentalities and kept informed the Wildlife and Heritage section of the Department of Tourism, Sport and Culture.

Its Minister is Lauren Moss (pictured).

“About a week prior to the Heritage Council meeting of November 30, 2018, I was contacted by Wayne Kraft who advised me that as I was the nominator for the heritage listings of Anzac Oval and the former high school, the assessment reports of these nominations would not be included in my papers for the meeting because of a conflict of interest on my part.

“I was excluded from all discussion on my nominations during [that] Heritage Council meeting .

“My treatment was in complete contrast to a similar situation the previous year in which a member of the Heritage Council, who had submitted a nomination for heritage listing, was able to participate in all discussions but abstained from voting.

“Following the conclusion of the meeting I was contacted by Wayne Kraft and advised that my nomination for heritage listing of Anzac Oval was accepted but that for the former high school was rejected.

“Shortly afterwards I received text messages alleging the assessment report for the former high school had been altered so as to diminish its likelihood for acceptance by the Heritage Council.”

Mr Nelson says after careful consideration he decided to put his complaint instead before the Independent Commissioner Against Corruption (ICAC) given that its “legislation obliges such information to be reported to it”.

Mr Nelson concedes “I delayed making the report to the ICAC for several months” during which discussions with Mr Kraft and Mr Wells took place. They provided him with the assessment report which revealed “what I considered to be significant shortcomings in the information that had been provided to the Heritage Council. 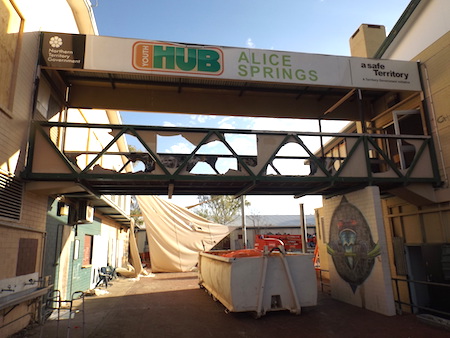 “On March 15 the Department of Infrastructure, Planning and Logistics (DIPL) published a media release announcing a tender for the demolition of the former high school and site remediation; and in particular quoted DIPL Chief Executive, Andrew Kirkman, stating the old school is unsafe and beyond economical repair.

“Mr Kirkman is the husband of Ms Susan Kirkman, who had requested a meeting with me on April 24 last year about my prospective heritage nominations. I fail to see how a conflict of interest does not arise in this situation but this seems to have escaped the relevant authorities.”

Ms Kirkman is the Executive Director of the Department of Tourism, Sport and Culture.

On April 30 this year Mr Nelson lodged his report to ICAC. This was followed by an invitation for coffee from Mr Kraft who, according to Mr Nelson, described his media interview last year as a “breach of my obligations as a public officer, as a member of the Heritage Council. I was also reminded of my obligations to report any information of possible misconduct to the ICAC.

“On September 25, 2019, the ICAC released its findings into my report of misconduct allegations. It found no evidence of improper conduct but did raise questions over the inconsistency between the assessment report that found the former high school is in good condition and the media release from DIPL that claimed the school is unsafe and beyond economical repair but provided no substantial evidence to support it.

“Significantly, the ICAC also stated ‘an independent expert consulted as part of the investigation gave the opinion that in his view the school building did have heritage significance and this would have been sufficient to continue on to public consultation’.”