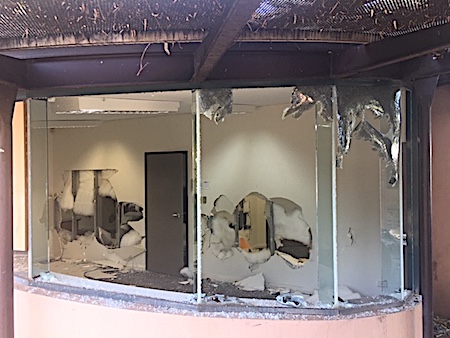 The former visitors centre adjacent to the Alice Springs library has been trashed.

It is reportedly owned by the Department of Planning, Infrastructure and Logistics.

We asked the department how long the building, in the town’s Central Business District, has been empty; has the government tried to let the building; what is the estimated value of the damage; and have the perpetrators been caught?

A spokesperson for the Department of Infrastructure, Planning and Logistics says it “can confirm the former visitor centre adjacent to the Alice Springs Library has sustained damage, which was reported to the Department on Wednesday afternoon. 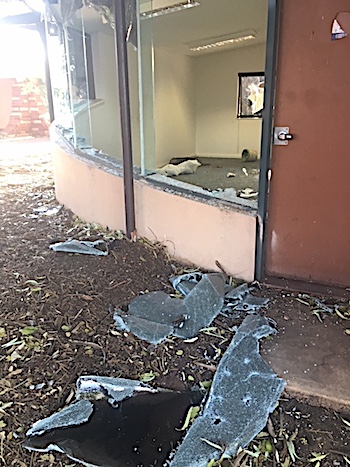 “It is believed the damage occurred within the previous 24 hours.

“DIPL is currently assessing the extent of the damage to the building, which has now been secured for public safety reasons. Police have been notified and an investigation is underway. At this stage, the cost of the damage is still being assessed.

“NT Government is considering the best use for this strategically placed CBD site ongoing.”

Police say they are “aware and are investigating the report of criminal damage on the old visitor centre building on Gregory Terrace.

“Just after 1pm on Tuesday police received a report of a group of youth causing damage to the building.

“On arrival the group had fled. It was evident to the attending officers that the building had sustained some damage prior to this incident, so it was not clear what further damage had been caused.

“This building has been unoccupied for some time.

“Police have reviewed CCTV footage and are working on identifying the people within the group.”

A former public servant in Alice Springs, who did not wish to be named, now living interstate, says the centre was a high priority in 2015 to be leased.

A tender for a tenant was meant to be put out but this apparently did not happen.

The walls were full of pictures of prominent locals. These were regarded as valuable but it is not clear what happened to them.

It was proposed to lease out the building for a peppercorn rent to amateur historians and photographers but that was rejected by public servants “because we can get a lot more for it, it’s valuable real estate”.