ABOVE: The Arid Zone Research Institute had asbestos removed last year. BELOW: Interior of Chapman House at the Pitchi Richi reserve. 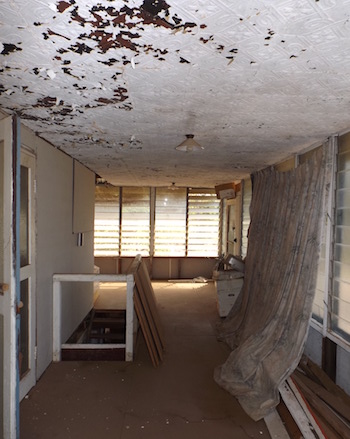 The investigation by the Independent Commissioner Against Corruption into the heritage assessment of the former Anzac Hill High School revealed some remarkable inconsistencies.

And quite apart from the inconsistencies concerning the old high school itself, how does the Gunner Government’s record stack up against circumstances pertaining to other sites in Alice Springs, in particular with regard to the management of “hazardous building materials” for which read principally asbestos?

The ICAC probe was sparked by an allegation by me of misconduct into the preparation of the assessment report for consideration by the Heritage Council for the old school’s heritage listing nomination.

In its public statement the ICAC “found no evidence of improper conduct on behalf of public officers or public bodies involved in the Heritage Assessment”.

It can be inferred from this that the Assessment Report’s content, despite some “factual inaccuracies [which] did not impact upon the outcome of the assessments”, can be held to be substantially correct.

The “report found the Anzac Hill High School to be in good condition, with no sign of deterioration in ANY (my emphasis) of the external walls, floors, pylons, or concrete stairs”.

This finding concurs with opinions of a number of people who are familiar with the old school campus, in complete contrast to the Department of Infrastructure, Planning and Logistics (DIPL) media release of 15 March this year.

The ICAC noted: “In contradiction to the [assessment] report, DIPL announced a decision to issue a $2m tender to demolish the site on the grounds that the building structure is unsafe and is beyond economical repair”.

The ICAC was given no substantial evidence to justify DIPL’s claims – no report was commissioned to assess the school’s condition or to conclude that it was no longer safe or economical to keep.

DIPL could only lamely respond: “Cabinet made the decision to demolish the building in early December 2018, subject to the nomination for heritage listing” and that “DIPL cannot comment on Cabinet’s decision for approval for demolition”.

This was followed by DIPL’s extraordinary admission: “Advice to Cabinet did not include detail on the current state or ongoing usefulness of existing facilities”.

The ICAC noted: “The only documents produced at any time were two reports in respect of hazardous building materials, a series of photographs, and a spreadsheet setting out some ongoing costs in respect of the buildings.

“The reply stated other matters such as:

• The buildings were not considered best use of the site ongoing.

• Technical officers had in depth knowledge of the facility and considered it beyond economical repair.

• To upgrade the facility to today’s building standards ‘was considered cost prohibitive”.

The ICAC concluded its statement: “No detail on these matters was provided and no documents to substantiate the ‘beyond economical repair’ proposition were produced.

“It appears also that no such advice or details were provided to Cabinet.”

Like virtually all constructions of its era, the Anzac Hill High School’s older buildings do contain asbestos materials.

The heritage listed Seven-Mile-Aerodrome (above and below).

This has been known for the entire period of its use as a school and college; and specific measures were taken in the past to maintain the safety and use of the facilities by painting or securely covering over asbestos-containing panels.

During the whole period in which I researched, prepared and submitted my nomination for heritage listing of the old school, I was constantly assailed by the red herring of asbestos as a reason why it may not be suitable for preserving the buildings.

Yet there are other local examples where, strangely, this same criticism just doesn’t seem to apply.

The following examples give the lie to this nonsense.

The first is Chapman House at the Pitchi Richi reserve just south of Heavitree Gap.

This building is derelict, including damage from termites – and it contains asbestos.

By any practical measure, it is substantially beyond economic repair; however, it (along with Pitchi Richi) is heritage listed, and deservedly so.

During the term of this current NT Government, Chapman House has been the recipient of two heritage grants ($49,600 in total) that have been contributed towards its restoration.

Unfortunately, due to the presence of asbestos, this work has been suspended for the time being. 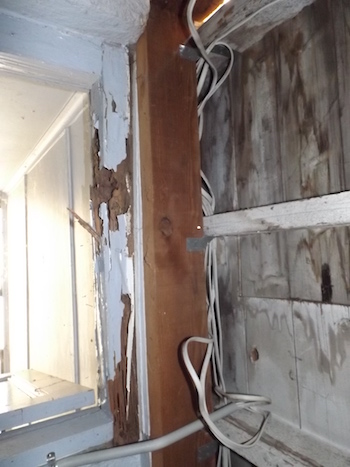 Despite this, nobody is arguing that the money shouldn’t be spent for this purpose.

It further should be noted that Chapman House is only a few years older than the Anzac Hill High School, and the Pitchi Richi reserve is actually younger!

Another great example is the Seven Mile Aerodrome located at the west end of the Alice Springs Airport.

The collection of buildings at this site constitutes a historical precinct, and is considered to be the best surviving example of an airport facility of its era (1940s to ’60s) in Australia.

It is a wonderfully evocative site and we are extremely fortunate to have such a place in Central Australia.

However, the buildings at the Seven Mile Aerodrome are in various states of disrepair and will require substantial funding to restore them – a figure I’ve heard quoted is up to $10m.

A major part of that cost is due to the fact that most of the buildings are made of asbestos, including the old vinyl floor tiles.

Again, it could be argued at one level that this major historical precinct is beyond economical use or repair; but happily the old aerodrome is heritage listed and efforts are underway to convert this dilapidated site in the long run into a major tourism asset.

As a small beginning towards this effort the Seven Mile Aerodrome was also a recipient of a heritage grant from the NT Government last year.

Compared with both Chapman House and the Seven Mile Aerodrome, the old Anzac Hill High School is unquestionably in far superior condition to these existing heritage listed sites.

So how much might it cost to remove the asbestos from the old high school?

Well, it turns out the Gunner Government has provided a very useful local comparison.

In January 2018 a tender was awarded for the removal of asbestos from the main office buildings of the Arid Zone Research Institute, roughly comparable in scale to the old high school.

This necessitated the vacating of the staff to other locations at AZRI or in town while this work was underway for most of the year but was completed by September, permitting the Department of Primary Industry and Resources the opportunity to belatedly celebrate the 50th anniversary of the institute’s official opening one year late (yes, it was opened in November 1967).

The cost of the tender awarded by DIPL for the removal of asbestos at AZRI was $324,000 – and the contractor was McMahon Services Australia (NT) Pty Ltd.

This is the same company that has won the tender from DIPL for the demolition of Anzac Hill High School for almost $2m.

A further $61,000 has been awarded to SLR Consulting Pty Ltd for the provision of an “Environmental Consultancy Service Site Audit”, presumably to ascertain the extent of asbestos in the old school for the benefit of a company with its own experience of asbestos removal.

Does this really stack up, or pass the “pub test”?

Incidentally, there’s another aspect of this situation shown up by the AZRI example .

As noted before, DIPL asserted to the ICAC that “technical officers had in depth knowledge of the facility and considered it beyond economical repair” as one reason to justify demolition of the old high school.

I was once a technical officer, too – at AZRI, working for the Department of Primary Industry and Fisheries (as it was) in the 1980s and early 1990s.

Notwithstanding being a well known active member of the CLP in those days, my “professional expertise” was never called upon to provide advice to the government at Cabinet level.

This explanation provided by DIPL to the ICAC is frankly beyond belief.

Finally, to the saddest irony of all.

In November last year, St Joseph’s Flexible Learning Centre (its new location at right) was evicted from the old high school to clear the way for its demolition.

St Josephs was relocated to the former Batchelor Institute campus in Bloomfield Street but this shift was delayed substantially because of urgent repairs required at those premises.

The reason for the delay? It was for the removal of asbestos.