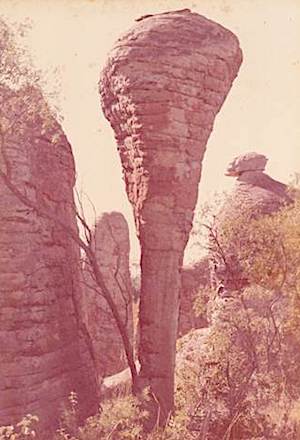 The Gulf of Carpentaria is the water playground for Alice Springs, potentially on a much grander scale than it is now. Regrettably, there is little sign of Boundless Possible and the region is certainly Different In Every Sense – mostly the worst, with lousy public infrastructure, as guest commentator GRAEME HOCKEY found out.

In October 1991, then CLP Minister for Lands and Planning Max Ortmann signed off on the Gulf Region Land Use and Development Study.

At the time it was the only planning document outside of town boundaries and probably still is today. It gave hope to the Gulf Region.

Mount Isa Mines development was still in the exploratory stage as was the diamond exploration on Spring Creek. Even at full exploitation of known resources the area involved was less than 0.2 of 1% of the total Gulf area.

The conservation proposal at the time had the Limmen National Park centring on areas of international and national significance, totalling some 2796 square kilometres.

This did not include river frontage and foreshore management proposals and other areas of lesser significance owned, managed or leased by individuals.

The high value areas would be the draw card for tourism and the local populace would provide the accommodation and private attractions.

What was not wanted was a Kakadu style operation. This was at a time when the  CLP was running the show from Self-Government in 1978 to Labor’s turn in August 2001.

In August 2012 it was back to the CLP but two months previously Labor Chief Minister Clare Martin had declared the Limmen National Park over 9369 square kilometres, more than three times the original proposal.

The 1991 Gulf document emphasised tourism as the way to diversity and the way to do it by upgrading the road network from Queensland through to Mataranka via Highway 1, the National Highway around Australia.

The Savannah Way (above right) started off in the early 1990s on the expectations that Gulf would become the place for caravanners.

Kakadu was the place to go right through to 2005, advertised world wide with the draw cards being Jim Jim and Twin Falls.

The failure to open in 2006 went around the world and Kakadu has been in dire straits ever since. As a tour guide you would wait in line at art sites – the crowds were such back then. 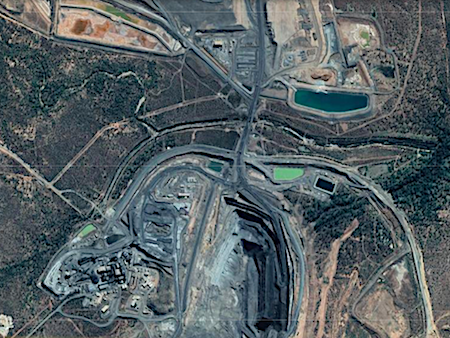 In recent years, huge advertising campaigns centring on smiling bikini clad jet setters lolling around pools at hotels in Darwin have been pushed relentlessly. The grey nomads featured to a far lesser extent in the Top End.

The McArthur River zinc and silver mine (at left), one of the world’s largest, brought millions into the economy including the haul road to Bing Bong port and upgrading of parts of the Carpentaria Highway.

The only real tourist development in the region is at King Ash Bay.

If negotiations for access across Borroloola Common and Bing Bong had not been successful it is highly probable that King Ash Bay would never have happened.

The fishermen and tourists who get to this spot have much to thank the mine for. 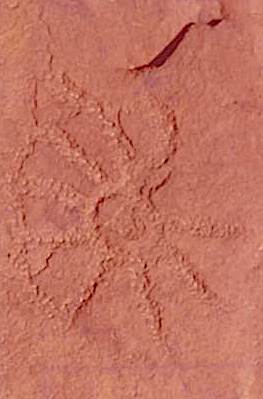 It is now October 2019, 28 years from the Gulf Study release that brought so much hope to the region, and seven years since the Limmen Park over a massive unmanageable area was declared.

Pictographs Hodgson River, in Limmen National Park but closed to the public.

Last month, after an absence of about 10 years, I travelled the Savannah Way from Mataranka to Borroloola.

Apart from a new bridge to Arnhem land over the Roper and a nice bitumen strip for the last couple of kilometres to it and a bridge over the Wilton, the 290 kilometres to Ryans Bend Road is an absolute disgrace.

Where sheeting has been carried out it is sump cracking rocks. Apart from a few concrete causeways the only other work done in recent times is to put up large numbers of signs saying “Danger. Bull dust ahead”.

At Tomato Island in the first short part from Roper Bar is an impressive camp ground with office block, caretaker’s residence, toilets and such and at 7.30am on September 16, along with the manager, was a single camper who was not going any further.

There are some half dozen NT Government built basic camp grounds through to Nathan River rangers station at the old station homestead.

I checked them all out. No campers and no sign of recent use. In 290 kilometres I met one traveler and they were going to Barratt’s fishing camp on the Limmen.

The ranger station had four ranger names on a board all listed as OUT.

The museum could do with a good sweep and the station area a lot of TLC. The access road to the station for visitors showed no signs of recent travel.

That night we stayed at King Ash Bay (at left) some 40 kilometres north of Borroloola.

It is  well run, tidy, bustling with activity with garage and fuel depot, shop, club house with meals catering for some 200 plus camper groups.

The 27 kilometre flat graded access road is maintained to pool table finish as every day when the water truck heads out to get water it tows a railway line each way.

The talk in the club is: Under no circumstances take the Savannah Way to Mataranka nor Highway 1 to Queensland!

I personally found out about Highway 1 the following day. I only travelled to Manangoora, some 80 kilometres east. 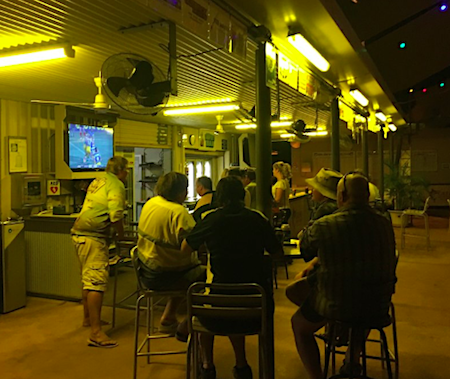 Almost all of the driving was in the table drains. The talk is that Queensland will have their part of Highway 1 sealed to the NT border within three years. The NT maybe never.

A suggestion to the relevant NT Labor Ministers – or maybe a challenge: Drive your own personal vehicle, not a government tagged one, over Highway 1 from Borroloola to the Queensland border and then take the Savannah Way from Ryans Bend to Roper Bar.

Back in Darwin over the last couple of weeks, the NT Government have announced, via tender or just an announcement, a couple of not needed road and bridge projects.

The first is a tender for a bridge over Kambolgie Creek on the Gimbat Road in Kakadu’s far south.

Your taxes at work, creating employment and all that. Good stuff.

The only problem is that Gimbat Road goes from the Kakadu Highway to the South Alligator River where there is a low level single lane concrete bridge.

You turn left here to Gunlom Falls or right to Koolpin Gorge but only in the dry as Parks Australia have a boom gate at this point that is locked from the beginning of the wet to Easter each year.

Why would any one rip out an existing causeway with pipes underneath that is only blocked a couple of times a wet season? Gimbat Road is a single use tourist road for about six months of the year.

Access was originally established to the Coronation Hill uranium mine back in the 1950s before Buladjang or Sickness Country as it is called raised its head and that mineral lease was incorporated into Kakadu as part of Stage Three by Prime Minister Hawke for political reelection purposes.

And secondly, by announcement, there is the the raising of the Kakadu Highway across the Adelaide River floodplain on a new alignment for four kilometres.

This will necessitate 13 bridges or one every 300 hundred meters and thousands of cubic meters of fill from elsewhere at astronomical expense.

What is proposed is to construct something to a 1 in a 100 year flood event when the rest of the Arnhem Highway and every other highway and road in the Territory are lucky to be constructed to a one in twenty year event which is all that is needed.

A new road on deep mangrove muds and depositional silts be required, an exercise that will cost many many millions for zero benefit to the community.

In the NT, National Highway 1 that circumnavigates Australia has 390 km of single lane bitumen from Daly Waters to Borroloola and from there to the Qld border a further 200 kilometres of dirt with only river crossings closed for weeks each year.

Tourists don’t go to Kakadu when the monsoon is at its most splendid and never will.  Spend OUR money where it will be of most benefit.

I have written letters to ministers on both these projects saying they are wasting tax payers money and why?

Neither project is necessary and will waste many millions of dollars that could be used in the Borroloola area.

Nearly all the existing Carpentaria Highway is single lane bitumen. There is no logical reason why this style of construction should not continue in making the Savannah Way and Highway 1 trafficable.

One further thing, on the Carpentaria Highway near the now plugged Origin gas hole on Amungee Mungee station a flat straight section 3,000 meters on red gravel soil has been upgraded from single lane bitumen to double on a piece no different to most of the rest of the 273 kilometres to Cape Crawford from the Stuart Highway.

The signage at each end says this little bit of work cost $2.4m (at left) which works out at $800 per lineal meter.

It would appear that someone is doing very nicely out of it when you consider that gravel is on site, no drainage is needed and the road underneath has been in operation without any problems for about 50 years.