The demolition of Anzac High School will continue, says Eva Lawler, the Minister responsible for the Department of Infrastructure, Planning & Logistics (DIPL).

A statement yesterday by the Independent Commission Against Corruption said that DIPL had failed to obtain advice about the state of the building, and that a report to hand had disclosed it was in “good condition” with “no sign of deterioration in any of the external walls, floors, pylons, or concrete stairs”.

But Ms Lawler told the Alice Springs News  a short while ago: “A report on the cost to repurpose and refurbish the site to an operating standard was not undertaken by the Department, as this would have been a waste to taxpayers’ money, given the old buildings were not considered the best use of this strategic site, and a Government decision had been made to clear the site subject to the Heritage listing nomination.

“The Anzac Hill High School site is of strategic importance within the town centre and the demolition of the old school structures will facilitate future opportunities at this site, that will benefit the whole community,” Ms Lawler said.

She was replying to questions from the News put to her this morning, including whether the NT Cabinet and DIPL had misled the public by claiming “the building structure is unsafe and is beyond economical repair” – an assertion for which the ICAC said it had no evidence.

Ms Lawler (pictured) says DIPL has “detailed knowledge of the facility and were required to ‘make safe’ the buildings from unlawful entry and vandalism.

“The existence of asbestos material on the site, which was well known to the Department officers, added to health and safety concerns, and the view that the buildings were unsafe.

Meanwhile Town Council CEO Robert Jennings says: “There is no association or action required from Council as a result of the ICAC findings for the Anzac High site.

“These findings do not impede any current discussion Council is having with the NT Government around finding a positive solution towards building the National Aboriginal Art Gallery in Alice Springs.

“A Heritage listing for Anzac Oval (separate from Anzac High School site) is currently going through Town Council for consideration.” 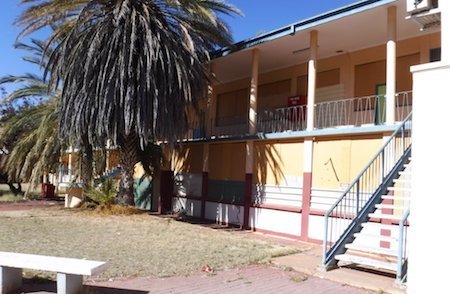 David Hewitt, an initiator of the Save Anzac High campaign, says he inspected the school at about 6pm last night and found “no signs” that asbestos had been removed, as claimed by Minister Lawler yesterday.

“Apart from a bit of rubbish and three empty fire extinguishers, the exterior is the same,” says Mr Hewitt.

This photos is one of a series Mr Hewitt took in July.

“The government stated on radio [yesterday] that asbestos removal has started but I could see no sign of this,” he says.

Meanwhile local historian Alex Nelson says he may seek a court injunction today against the demolition.

Ms Lawler did not respond to questions from the Alice Springs News whether in light of the ICAC finding, the government would allow the process of heritage nomination to re-start and proceed to public consultation, and will the demolition be halted while Mr Nelson is seeking leave to put the issues before the Civil and Administrative Appeals Tribunal.