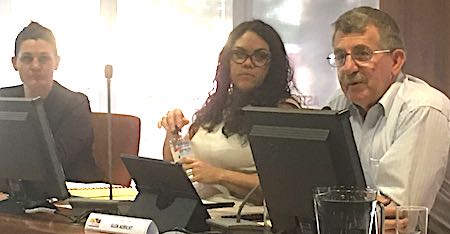 A majority of her colleagues have effectively put Councillor Jacinta Price on notice that they will not continue to unquestioningly accept her absences from council meetings.

At the August end-of-month ordinary meeting they rejected her apology. She was away, she had said, for reasons of “work”.

It being rejected meant that she was absent without permission from council. Under the Local Government Act (S39) if this were to happen in two consecutive ordinary meetings, she would cease to hold office.

A formal vote is taken on the acceptance of apologies at ordinary meetings. To my knowledge, this is the first time an apology has been rejected.

It was easy to miss. Mayor Damien Ryan asked for a mover and seconder for a motion to accept. It was moved by Cr Glen Auricht, seconded Cr Jamie de Brenni.

In favour? Against? I didn’t even look around the room to count hands, it is usually so automatic.

“In the negative. Thank you,” said Mayor Ryan.

No-one said anything and business moved on.

The Alice Springs News has previously drawn attention to Cr Price’s record of absences. This was before the federal election in May which she unsuccessfully contested. Since resuming her seat on council her attendance has continued to be erratic.

She apologised, “business commitments”, for the ordinary meetings of May and June. These apologies were accepted.

She attended the July meeting by phone. Phone attendance is only available for the open section of the meeting.  And as noted, she did not attend the August meeting.


I contacted Cr Price for this report, welcoming her comment. She did not reply.