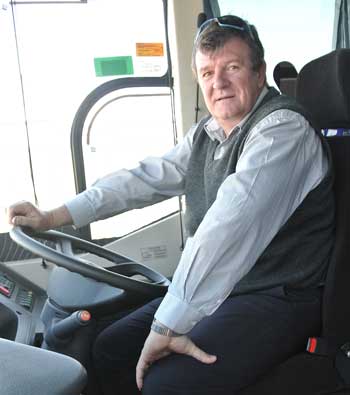 Our report about hate speech last week has resulted in me being trolled, which – looking at the bright side – puts me in the box seat for reporting about this vile practice of the increasingly disreputable “social media”.

In the discussion that this town needs to have, about the troubled and troubling children in our midst, trolling – see definition at bottom of the page –  and the kind of attitudes it reflects towards the topic, will get us nowhere.

The language is frequently foul. No substantiation is provided for various accusations against me. But the people posting have one thing in common: None of them are disputing the accuracy of the facts in our report about tourism figure Wayne Thompson (file photo at right).

It’s clear the trollers simply don’t like that we have brought these facts to broad public attention.

The Facebook postings are largely the direct opposite to what we journalists are required to do under our Code of Ethics, to which the Alice Springs News adheres.

This includes “striving for accuracy, fairness and disclosure of all essential facts” and to do our “utmost to give a fair opportunity for reply”. 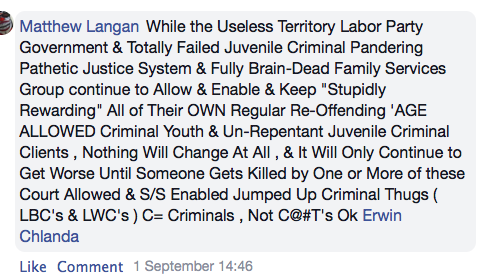 I emailed Mr Thompson ahead of publication on August 28, with “Fact check, right of reply” written in the subject box. I sent the entire draft of the report.

AT LEFT: Is this the way we’re going to discuss a hugely important issue in this town?

It doesn’t get any better than that. This exceeds what most journalists would do.

In response Mr Thompson published that draft on Facebook, without my permission, breaching my copyright, which means he stole my work.

The troll campaign against me and the News is riddled with defamation.

A good portion of it is so imbecilic that no-one would take it seriously. But the balance of the posters can take comfort from the fact that defamation court action is expensive (if you hire counsel), drawn-out and far from certain that justice will be done.

The trolls targeting me contribute to an image of the town as a nest of vipers.

It also turns upside-down the purpose for which the internet which started with a message sent in California on August 27, 1976, striving to improve communications for the benefit of humankind.

In Alice Springs – on this occasion and many others and with a range of targets – its manifestation, at least for some of its users, is as a tool for insult, hatred, racism, spreading fake news, and making assertions that are pure fabrication. This is a point made by other posters who try to engage in more constructive debate.

The trolls make up a small part of the Alice Springs Community Open Forum membership, all up stated to number 14,669. Our own Facebook site has 6818 likes. It’s where we promote our stories by posting the heading and a photograph.

It’s a logical form of informing people about news, yet Paull Alekna, a former candidate for town council, keeps posting “Clickbait” as a comment to our posts, time and again.

Neither Mr Stiller nor Mr Purdue (image above) provide any corroboration for their claims.

Monotony and repetition are a steady characteristic of this trolling: Its threads suggest that the posters encourage each-other, escalating their abuse as they go along.

Mr Thompson himself headed off the mob frenzy with what is clearly a fabrication. We have published 20,853 readers’ comments so far. We keep careful records of them. There is none from Mr Thompson about a story on Ms Martin. If I had “removed” it I would have informed him, by email, about the reason. Mr Thompson is welcome to prove he has submitted a comment.

The issue has triggered posts from people most of whom I wouldn’t know from a bar of soap.

It’s creepy to be addressed by them as “Erwin” when they have made no effort to contact me. My email and phone number are published on our newspaper website.

The FB mechanism is for me to get an email alerting me to the fact that I have been mentioned. This has occurred frequently in the past few days.

I can imagine that people with a less robust nature than mine could be profoundly affected by being pounded in this way.

My half a century in journalism has equipped me for dealing with rabble, as it has enriched my life immensely through meeting many wonderful people.

Having been in town since 1974 I find it surprising and deplorable that people I have known for decades are joining the fray. This includes Vicki McDonald, a leading figure in the Country Liberal Party. I am still waiting for an answer from her to an email on another FB occasion, when I asked her to explain what she meant by saying I am being “warned”.

Mr Hamilton clearly does not think that providing an independent news medium  for the town for more than quarter of a century has involved hard work, being community minded and doing something useful for this community. He might also  have found out – by asking me, for example – that I am a member of the service club Rotary and of the Prison Fellowship, driving as a volunteer the shuttle bus that takes visitors to the prison.

Mr Hamilton is the new manager of the National Road Transport Hall of Fame, appointed by the Adelaide law firm selected by the NT Government to run the hall, after the government sacked the volunteer board.

The ready belief that something is true because it is on FB has enabled the deception of millions of people, not in the least by the Russian Internet Research Agency in St Petersburg, whose fake news tentacles are reaching into many countries, including Australia, according to the Griffith Review*.

Mr Thompson, it seems, is having a shot at this in Alice.

He is reaching back to a project mooted by him together with Steve and Janet Brown, to found a private initiative helping children at risk, 24/7, which is clearly making little or no progress.

We gave extensive coverage to the inaugural meeting in June last year and again in August last year.

Mr Thompson, in the trolling spirit of  you can say anything without checking, has got this wrong as well: I had a perfectly normal chat with Mr Brown a few days ago but did not raise the youth project because Mr Thompson had earlier given me a “no comment” response. Over the years we have published thousands of words by Mr Brown, both in an opinion column and as   reader’s comment. We believe in presenting a diversity of views even if Mr Thompson doesn’t.

If Mr O’Burtill wants a news media that is corrupt he’s on the right track: Cash for Comment is what he’s condoning and promoting here.

The Journalistic Code of Ethics requires a strict separation between financial interests of a news organisation and its editorial performance. For advertisers to encourage media to do otherwise is equally corrupting to our democracy which relies in strong part on the scrutiny by media free from commercial pressure.

I cannot remember a single complaint from Mr Thompson about our journalism – a fact he omits to mention in his current outbursts.

AT RIGHT: One of several reasonable commenters in this thread. Bravo, Ms Wankapai!

In the bigger picture a handful of rude malcontents pale into insignificance compared to the around 20,000 readers (Google Analytics – see details in our pages) of our independent, locally-owned paper that’s been serving this town for a quarter of a century.

Stand by for more!


DEFINITION: A troll is a person, to use Wikipedia’s definition, “who starts quarrels or upsets people on the Internet to distract and sow discord by posting inflammatory and digressive, extraneous, or off-topic messages in an online community (such as a newsgroup, forum, chat room, or blog) with the intent of provoking readers into displaying emotional responses and normalizing tangential discussion, whether for the troll’s amusement or a specific gain.”


* See “Move very fast and break many things: Digital gangsters and the Big Other” by Julianne Schultz, Griffith Review 64, The New Disruptors.

UPDATE Sept 4 at 8.10am
We added the following sentence: “Mr Hamilton is the new manager of the National Road Transport Hall of Fame, appointed by the Adelaide law firm selected by the NT Government to run the hall, after the government sacked the volunteer board.”