It's good-bye, Liz Martin, after 25 years creating an icon 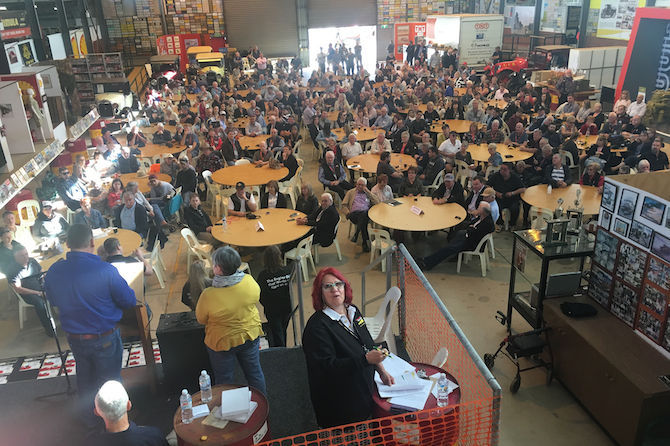 Liz Martin, pictured above in the foreground, you can’t miss the red hair, with truckers, inductees and guests on Saturday morning at the National Transport Hall of Fame, was doing her final job for the iconic institution that was her life for more than a quarter of a century.

According to a source of the Hall, Ms Martin was hired by the statutory manager of the association now running the multi million dollar attraction, following the sacking of the volunteer managers and board by the NT Government.

The source says this year’s attendance numbers were among the lowest ever for an annual reunion – about 400, with some 70 cancellations.

The source says Ms Martin’s short-term contract to organise this year’s reunion will end on Wednesday – as will be the case for 20 volunteers who signed on for the occasion.

The source also says the new manager appointed by the government, Adelaide law firm, Rosey Batt & Associates, had themselves encountered difficulties when they became unable to access the Hall’s bank accounts.

Past enquiries – how much has the manager charged so far and what are the projected costs, all to be met from the resources of the Hall – have not been answered.

By ERWIN CHLANDA The NT Gunner Government’s decision to sacrifice an area bigger than Belgium to the fracking industry is stupid at a time when...
Read more
Issue 1