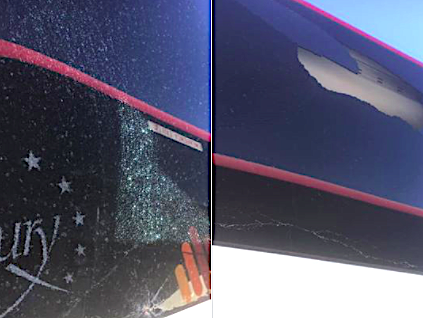 That call is made as serious commentators are telling us that society, not police, must reduce crime, and as we already have more police, a massive three times the national average in the Southern Command, yet still with unsatisfactory results.

NT Police Association president Paul McCue, in his opening address to the 2019 annual conference, said he gets asked “a lot … about how much is the right amount of police”. But he mostly re-iterates his calls for more police as a solution to the problems he cites.

He does not offer reform ideas of how this huge and disproportionately expensive government function could be deployed more efficiently, although he says: “We firmly believe the development of government policy can only be enhanced when speaking to those on the frontline and even though we will continue to be vocal against policy which we believe is not in the best interests of our members, we know you are still listening to their concerns first hand.”

The questions clearly are: What is the frontline saying?  If society is the key to lowering crime, is there a dialogue between it and the police?

Parliament is rewriting the Liquor Act following 70 recommendations of the Riley Review.

While denying the Alice Springs News access to the raw data upon which her claims are based, Leader of Government Business Natasha Fyles says “assaults involving alcohol are at their lowest rates in 10 years – down 37% in Alice Springs, while domestic violence assaults are down 25%”.

Both the claims by Ms Fyles and the release of a “comprehensive youth crime plan” by Dale Wakefield and Michael Gunner involving job, cultural and wilderness camp activities have one thing in common: The words “parental responsibility” don’t rate a mention. 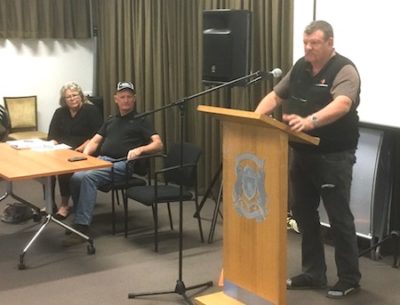 The angry frustration about this by coach operator Wayne Thompson (at lectern) is palpable: A bit more than a year ago he, together with Janet and Steve Brown (also pictured), called a public meeting to start a privately run 24/7 accommodation and centre for street kids.

That did not eventuate but yesterday Mr Thompson stated on Facebook that he cannot begin to articulate “how angry I am this morning.

“Two coaches with Ghan passengers were hit with rocks.

“Both rocks were railway ballast and had the potential to kill!

“Two different locations an hour or so apart and the Ghan itself had four windows done!

“Insurance does not pay for our glass, so I start the day with a $3k plus bill.

“The police believe they know who the group is but have not been able to catch them.”

Mr Thompson then addresses a staffer of Ms Wakefield: “You need to wake your glorious leader up to the fact kisses and cuddles or being packed off to Papunya with a picnic lunch and a show bag ain’t working!”

Mr McCue (pictured) had Minister for Police Nicole Manison and shadow minister for Lia Finocchiaro in his audience.

He said the situation changes for the force “when new police stations are built, but no additional staffing for that station are recruited.

“Our KPIs are the rosters. When rosters cannot be filled, and are reliant each week on overtime shifts, there are not enough [police].

“When sergeants are teaming up with constables to fill a van and ensure enough general duties are available, there are not enough .

“When an officer is left on their own in a remote station for more than a night, there are not enough.

“While we accept there is an argument for more efficient rostering, it does not detract from the ongoing complaints our representatives receive about the inability to resource frontline rosters fully.

“We acknowledge the government have recruited additional police since elected , but we are barely where we need to be.”

Mr McCue said there are 60 more constables due to start in October, “but as we stand, there are no constables in recruit training today.

“So between now and April 2020, we will have no graduating constables to hit the streets over the busy summer period, and with stations such as Katherine and Alice Springs reliant upon regular probationary constables graduating from the college, we hold fears already stretched rosters will suffer as attrition and return of service across the agency continues its current trend.”

Mr McCue referred to the ageing element in the force: “I don’t know too many people who want to be rolling around in a van at three in the morning on Mitchell street as a 60-year-old , but it is the reality our members face in the light of a slashing of non-frontline roles.”

Although the public being policed in remote communities are likely to be in much poorer accommodation Mr McCue was critical of some of the police facilities: “The temporary shipping containers police continue to be expected to utilise in many communities following the intervention of 2007, should simply be earmarked for closure.

“The association is appalled that those facilities remain. They are nothing more than an overnight donga and are not fit for purpose.

“They should be replaced or removed.”

Mr McCue, in his seventh year with the association, closed his speech with a reference to “our hashtag NeverWorkAlone banner.

“It doesn’t just reflect our message from last year, that a police officer should never work alone, and they shouldn’t, but it reflects why I wanted this job in the first place, in that no officer should ever feel alone, ever.

“My work in that space is not finished just yet.”