Despite clear leads, no-one was punished for making this mess 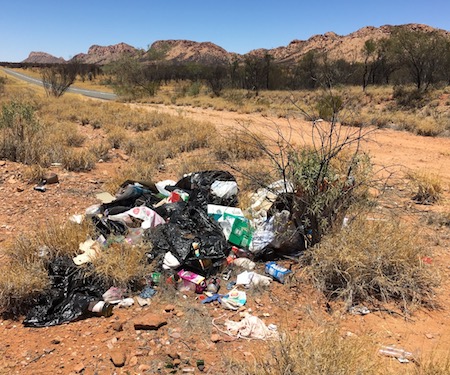 This pile of rubbish, about a trailer load, was dumped by the side of the gateway road to the West MacDonnells, the prime tourism asset of Alice Springs.

The Alice Springs News discovered the mess during a field trip in February and reported it to the authorities.

It was an opportunity to make an example of the vandals, prosecute them in open court, name them and shame them.

Nothing of that happened. In fact the vandals were not even made to clean up their mess – the Central Land Council did it, presumably on behalf of the land’s owners.

All this after a comic opera style buckpassing from police to town council to the Environmental Protection Agency via a private company hired to streamline responses to complaints.

The detailed report we published on April 19 ended with a quote from the Environmental Protection Agency (NT EPA): “The NT EPA has looked into your matter and unfortunately without further information about the specific location hasn’t been able to determine on whose land the rubbish is located.

“If the exact location can be determined we can contact the landowner and ask they clean up the rubbish.”

Specific location? This is what we had supplied to the police in the first place and later to the NT EPA, on February 10, was this:

• Description of the road as the “Larapinta / Jay Creek Road”.

• The rubbish is on a small mound on the northern side of the road, connected with the bitumen by a short dirt track, in and out.

• A photograph showing the rubbish, the bitumen road, the short dirt track, the mound on which the garbage was placed.

• The MacDonnell Ranges in the background unquestionably further identified the location.

• A mobile phone number (the location is within mobile reach).

• And five envelopes taken from the rubbish, carrying the names of two people and their shared address in Alice Springs.

Lo and behold, the NT EPA managed to find the location.

We asked for a result of the complaint and received the following email this week: “The CLC collected and disposed of the rubbish last month.

“No further action will be taken as it has not been possible to determine who caused the rubbish to be there initially.”

What a joke. What about the names and address on the five envelopes?

Did they not provide a lead? What was done with the envelopes? Were the people named contacted? What did they say? We’ve asked the questions and will report the answers.

“I can also confirm that the NT EPA has no record of this matter being reported to the pollution hotline … so matters can be promptly followed up,” the man from the department stated, apparently chastising us for not following protocol.

We replied: “While most people are aware of the existence of the police, few would know about the Pollution Hotline. Should the public assume that a report such as this to the police is not equally ‘promptly’ followed up?”

Quite clearly the public can make no such assumption.