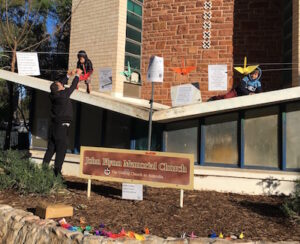 Alice Springs locals determined not to forget the devastation of Hiroshima and Nagasaki by American nuclear bombs in 1945 will come together on 6 August on the Flynn Church lawns in Todd Mall.

Once again they will be making peace cranes in the Japanese origami tradition, but this year they will offer the cranes to others as a gesture of thanks for the work they do “to create peace and prevent violence in our homes, communities and countries,” says Chris Hawke, member of  the Hiroshima and Nagasaki Day Remembrance Organising Committee Alice Springs.

Its acronym,  HAND ROC AS, brings to mind the saying that “the hand that rocks the cradle rules the world” – defining peace not as victory in war, but as the nurture of human life.

Thanking others with peace cranes is a new focus for the committee’s Hiroshima Day remembrance, adding to the  minute’s silence observed at 8:44am – the first nuclear bomb detonated over Hiroshima at 8.15m their time, half an hour behind CST, instantly killing some 80,000 people, injuring 70,000 more. Tens of thousands died subsequently from radiation exposure.

Hiroshima Day activities are focussed on “the 4R’s of remembering, reflecting, rejoicing and recommitting to a more peaceful world free of the threat of nuclear weapons,” says Mr Hawke. 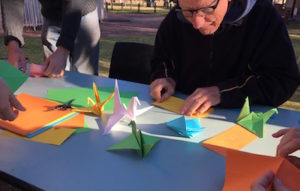 “We encourage everyone to explore the 4Rs between 6and  9 August every year to ensure nuclear weapons are not used again.

“We wish to thank those who remind us to remember and reflect on the terrible impact of using nuclear weapons on these days in Hiroshima and Nagasaki in 1945.

“We rejoice in the many things people do to resolve conflict without threats and violence in their families, workplaces and wider community. Our global culture often reflects what happens in our homes.”

ICAN, which originated in Australia but is now an international organisation, was awarded the 2017 Nobel Peace Prize for its role in highlighting the devastating humanitarian impact of any use of nuclear weapons and for their efforts to achieve a treaty-based prohibition on nuclear weapons.

As part of a national tour promoting the work, Australian Director of ICAN Gem Romuld will give the 2nd Annual Yami Lester Address in Alice Springs at an event on 9 August, hosted by the Alice Springs Peace Action Think Tank (ASPATT). She will speak to ICAN’s work, with a focus on Australia in relation to the ban treaty.

At this time  ASPATT remembers not only the human devastation caused by the bombing of Hiroshima and Nagasaki but as well the nuclear tests conducted by the British Government in Maralinga, South Australia in 1953.

The impact of the tests in Central Australia had horrific environmental and health effects, including disability, on the Indigenous people living there – among them long time activist, the late Yami Lester OAM.

In 2017 the United Nations Conference made the decision to negotiate a treaty on the prohibition of nuclear weapons, leading towards their total elimination.

“The threat of nuclear war is on the rise, but the nuclear weapon ban treaty holds the key to a shift in direction. It is our best chance to get rid of our worst weapon and Australia must join the right side of history,” says Ms Romuld.

The treaty opened for signature at UN headquarters in New York on 20 September 2017 and will remain open indefinitely. Once 50 nations have ratified or acceded to it, it will enter into force. At the time of writing, there are 70 signatories, with 23 ratifications.

Australia has not signed. New Zealand immediately signed in 2017 and ratified the treaty on 31 July 2018.