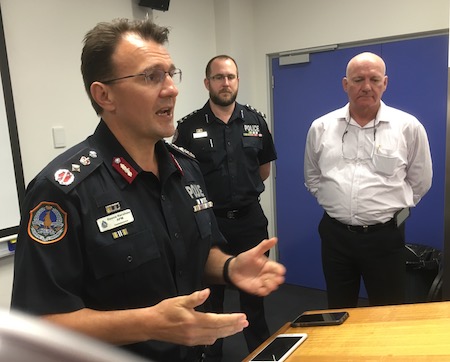 The Government will recommend to the Governor-General that Reece Kershaw APM (at left in the photo) be appointed as the eighth Australian Federal Police Commissioner, Prime Minister Scott Morrison announced today.

Commissioner Kershaw commenced with the NT Police Force (NTPF) in February 2011 and in April 2015 was appointed Commissioner of Police and Chief Executive Officer of the Northern Territory Police, Fire and Emergency Services, according to a media release.

Prior to commencing with the NTPF Commissioner Kershaw was with the Australian Federal Police, including secondments to the National Crime Authority, the Australian Crime Commission and overseas postings to The Hague, East Timor and the Solomon Islands.

He is a Graduate of the Federal Bureau of Investigation Law Enforcement Executive Development Program and was awarded the Australian Police Medal in the 2016 Australian Day Honours.

The Police Association says it congratulates Commissioner Kershaw on his appointment but is disappointed the announcement was made public “before our members were advised.

“We’re calling on the NT Government to move quickly in appointing a new Commissioner to avoid unnecessary instability within the senior police ranks,” says association president Paul McCue in a media release.