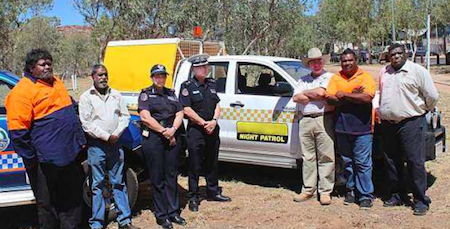 Charles Darwin University, which is in financial difficulties, has axed or at least shelved a VET course for night patrol members.

They are regarded as “first responders” when there is trouble in communities, on the front line of efforts to reduce crime and harm.

Diane Hood, the CEO of the Central Desert Regional Council, when asked for comment, said 50 to 60 people from the council had previously taken that course, and she was about to enrol several more.

It is understood that officers from other local governments had also been enrolled.

Ms Hood says the course was “very beneficial. It is great to have an accreditation process happen but a gap is not desirable”.

She was about to enrol several people, says Ms Hood.

There is a high turnover in regional council jobs, and participation in the night patrol course has frequently led to other positions in the council.

A CDU spokesman says the accredited course called “CERT III in Community Night Patrol” has expired, and CDU is waiting for the release of a new qualification.

“CDU cannot take on any new students until this qualification is nationally endorsed at which time CDU will consider the newly established program for scope.”

Asked when the course is likely to be re-instated the CDU spokesman said: “If a qualification is ‘on scope’ it means as an approved Training Provider we can legally deliver a qualification, product or specific skills sets through our VET operations.

“The process of  ‘on scoping’ is lengthy, but ultimately if we want a product ‘on scope’, which is nationally approved by the regulator Australian Skills Quality Authority (ASQA), we have to apply to ASQA to do this.

“We cannot teach a subject that is not approved by our regulator and is not recognised nationally by the Australian Industry Skills Committee or an Industry Reference Group,” says the spokesman.

“Some approved products go through a periodic review and are often referred to as ‘teach out’ because they are being revised or revamped to meet changing industry needs.

“The accreditation process is not within CDU’s control.”