Member for Araluen Robyn Lambley claims “the Gunner Government has finally listened and will be making an announcement to build a multi-storey car park at the site of the old pathology building at the hospital”.

She says it’s a success for people power.

A petition she launched at the Show on Friday collected almost 1000 signatures in two days, demanding the car park that would prioritise car parking for the sick, elderly and disabled.

“This is great news for the people of Alice Springs. I congratulate all those who jumped on board and supported the petition. I know many more are intending to sign,” says Mrs Lambley.

“We sent a clear message that we have had enough of endless planning and procrastination. The car parking situation is unsafe for patients, visitors and staff. We cannot wait any longer for something to be done.

“The Gunner Government built a multi-storey car park at the Royal Darwin Hospital in less than two years and does not charge. Alice Springs people deserve the same.

“I look forward to seeing the details of what the Government is proposing.

“I hope they have developed a real plan and that this is not just a kneejerk reaction to community pressure.”

The government confirmed this morning it will build the multi-storey carpark as well as 70 residential units for staff.

The old Pathology and CDC building will be demolished to free up the space for the carpark. A tender for this demolition work will be released within the coming month.

Local company, Whittaker Street Developments, was awarded the accommodation contract, “which will see a new high-quality complex constructed between Todd Street and South Terrace, and will help attract and retain professional health staff in Alice Springs,” according to a media release.

Also included included in the staff complex are a swimming pool, gymnasium, children’s playground and potential retail or other commercial space.

“Works on the staff accommodation are anticipated to begin this year and completion is expected in late 2020,” says the statement.”

The statement does not disclose when the car park will be built.

“After being approached by local police, and in the spirit of supporting them in their role, council agreed to increase the number of allocated parking bays in Parsons Street by seven bays, at an April 2019 meeting between police representatives and council staff. This agreement between the two organisations is subject to feedback and review.

The Alice Springs News is now inviting comment from the police. 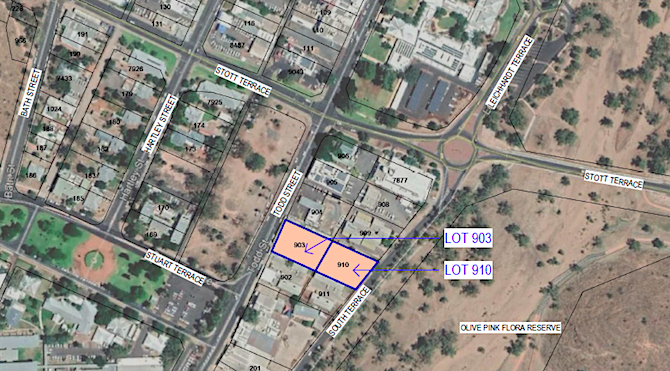 In reply to questions from the Alice Springs News the government has pinpointed the location of the 70 residential units (see above), has stated tenders had been called for the project, but declined to give financial details details of the contract other than to say “the lease is subject to normal commercial considerations”.

The government’s media release yesterday stated: “Central Australian Health Services will lease the units from the building owners [Whittaker Street Developments] with an initial lease period of 10-years, with an option to extend.”

The News understands Whittaker Street Developments is linked to Sitzler Pty Ltd which also owns the Supreme Court building, on lease to the government.