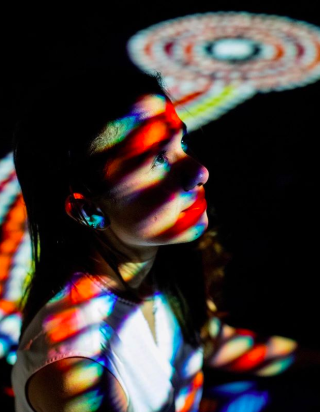 The facts are very different: Try about half. The same applies to this year’s event.

The real figures were obtained by Independent Member for Araluen, Robyn Lambley, via a “written question” in Parliament, following a request from the Alice Springs News.

What’s more, by that formula, just 4247 people attending were visitors.

Nearly twice as many locals got a free show: The ancient Romans called it “bread and circuses” – a surprising gift from a government with the greatest deficit in the NT’s history.

“More reason to treat anything that Minister Moss says with a grain of salt,” says Ms Lambley.

All this is surrounded by incessant hype – record numbers; unique, visually stunning light installations; incredible; new and exciting; premier events and attractions – and so on.

The estimated cost to the government of this year’s event was $2m.

Next year it will be a staggering $5m for “supporting Parrtjima” which, says Ms Moss, will be “used for the operational delivery, resourcing, infrastructure and marketing to increase the event experience and attract bigger attendances, particularly visitors to the region.

“This investment also enables the event to continue to extend the program in Alice Springs Mall which has proven to stimulate a greater opportunity for economic return for local transport, retail and hospitality business.”

Conflating “through the gate” figures with numbers of people attending, clearly to justify expenditure of public money for entertainment, has been a frequently employed strategy of NT Government instrumentalities.

We asked Ms Lambley whether she agreed with our calculation. She replied: “Yes.

“I question their methodology of collecting these statistics.  How do they derive these figures?

“How do they know that RL attended Parrtjma once or four times?

“There is no one entrance. It is a free event. At night there is no visible means of assessing numbers. People swarm in from all directions in the dark.

“I can only assume that these figures are based on random samples of people over the period of the festival.

“Accurate?  I think not. These stats are soft and potentially very flawed.

“Your estimates, Erwin, could even be generous. I find it difficult to take these figures seriously.

“Suffice to say it is an impressive show that ‘appears’ to be well attended. Beyond that is misleading, nonsense!”