Gallery: no deal yet on land swap 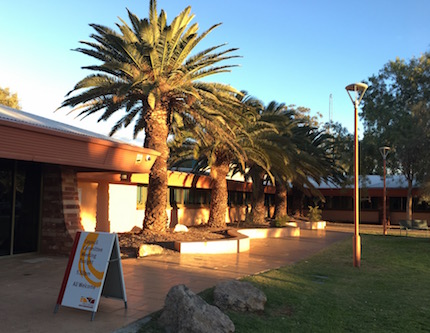 There is no agreement yet between the Town Council and the Territory Government about a land swap that would see a national Aboriginal art gallery built on the site of the present civic centre.

Under this deal, the present civic centre would be demolished and council would relocate to the site of the old Anzac Hill High School.

There was a confidential meeting to discuss the proposal at 7am last Monday. Attending for the NT Government was Cliff Weeks, Executive Director Central Australia, Department of the Chief Minister.

Most councillors were present although Cr Jacinta Price was not. This was pointed out at Monday night’s meeting by Cr Eli Melky, when he asked for support from his colleagues to have the matter discussed in open.

Cr Marli Banks also wanted to have the matter brought into open, but no-one else did.

Any motion to that effect, warned CEO Rex Mooney, would be made at their “peril”: under the Local Government Act, motions to bring matters out of confidential can only be moved within confidential. That apparently happened but only the most general information has been released.

To an enquiry from the Alice Springs News, Mr Mooney said today that  council is pleased to be working with the NT Government “for the long term economic, social and cultural benefits for the whole of Central Australia and of course Alice Springs.”

The land swap deal, however, raises “many complexities and options which are to be expected and are taking some time to explore.”

The Alice Springs News has previously reported that there are no budget allocations from either party for the very substantial expenditure that would be involved.

The allocation for the gallery ($48.5m) remains in the NT budget but there’s nothing for a new library, estimated at $30m, and nothing in either set of books for a new civic centre.

A good part of the opposition to the government’s plans to put a gallery on the site of the old Anzac Hill High was on the basis of the heritage values of the precinct broadly, including the school, for both Aboriginal and non-Aboriginal locals.

The crunch came when Arrernte custodians collectively withdrew their support for a gallery to be built there, for cultural reasons.

However, demolition of the school to make way for these latest plans is still likely to be met with controversy.

Councillor Eli Melky, when asked to name the points of disagreement preventing the Town Council and the NT Government from coming to a deal about the land swap, said: “Council is now obligated to keep the details of the discussion in confidential until NT Government gives the OK to let the information out in the open.

“I can say that to date the council is working with NT Government to reach an agreement. I have sought clarification from the CEO, I am now clear on what is in confidential and what is not in confidential.”

After both the NT Government and the Town Council agreed to discuss the issues in public Cr Melky, having made several attempts to bring the details into the public domain, said: “I face three years in prison if I disclose matters that are in confidential.”

The Alice Springs News put the following question to Two Council CEO Rex Mooney: What does “taking out of confidential” mean?

Does it mean the subject in its entirety can be reported, discussed, commented upon by elected members and staff and any correspondence, minutes or other documents are available to the public and the media for inspection?

Letters and correspondence can, under a Council resolution, be transferred from confidential into the open.

In relation to the special confidential meeting on Monday morning, any release of documentation requires the express approval of the NT Government which has not been received.

By ERWIN CHLANDA "Parrtjima – A Festival in Light attracted more visitors to the Alice Springs event than ever before and generated almost $10m in...
Read more
Issue 1