US marines in Darwin could drag Australia into war

Above: Marine Rotational Force Darwin, from their Facebook page.

A national peace group claims that the USA marines stationed in Darwin could drag Australia into war.  The claim follows lengthy correspondence between IPAN, the Independent and Peaceful Australia Network, and a succession of Prime Ministers and Ministers of Defence. The network is concerned that Australia would have no control over the situation, if it suited the interests of the USA to attack some country in our region.

In the correspondence IPAN has repeatedly asked “What assurance does the Australian government have that the USA marines stationed in Darwin would not engage in military action on orders from Washington?” IPAN says that there has been no satisfactory answer to this question, which has simply been avoided.

Previous Defence Minister, Christopher Pyne, confirmed that “the marines remain within the US Marine Corps chain of command at all times”.  According IPAN’s spokesperson, Nick Deane, “This means that the government can exert no real control over any USA-initiated military action that might be launched from Australia.

“In that event, Australia could, and probably would, find itself at war, whether it wanted to be or not.” 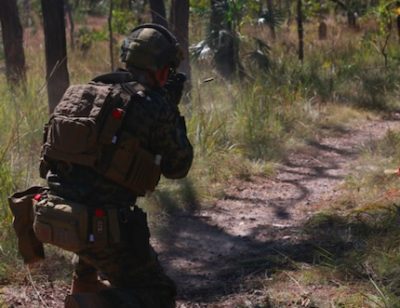 In the correspondence, IPAN drew on the words of ex-PM Malcolm Fraser, who spoke and wrote about the matter before his death.

Left: A marine in the Kangaroo Flats training area, from the Australian Department of Defence website.

Said Mr Deane:  “The words and thoughts of a figure of the stature of ex-PM Malcolm Fraser cannot be ignored. The new government must speak openly about the issue; explain why there are USA marines in Darwin and provide assurance that the Australian government can prevent them being used in aggressive action on orders from America. The government must address this threat to Australian independence.”

Peace activists across the nation have been highly alarmed about the situation since the 2011 announcement that USA marines were coming. For those who question the wisdom of too close an alliance between the USA and Australia, that announcement took the alliance one step too far.

Mr Fraser took a similar position in his book ‘Dangerous Allies’. Before he died, he addressed the possibility that the marines might become engaged in military action by attacking some other nation in our region, on orders from Washington.

He is quoted as saying, “They’ll do it and we’ll read about it in the newspapers. Our prime minister will be told about it after the attack is made. Because that’s the way these things work. That, for me, is a total denial of Australian sovereignty and if we were ever independent, it’s a denial of Australian independence.” (The Guardian, June 3, 2013.)

IPAN, representing a cross section of the Australian community aims to build a strong community voice for peace-promoting foreign policies. IPAN will hold a national conference, “Australia at the Crossroads: Time for Independent Foreign Policies” in Darwin from 2-4 August.


Notes: IPAN is made up of numerous civil society, religious and trade union organisations, including locally the Alice Springs Peace Action Think-Tank.

According to the ABC, since 2012, more than 6,800 US Marines have served in in Darwin, training alongside the Australian Defence Force. The rotation will reach the full complement of 2,500 for the first time by next month.

Feds and Rovers in fourth clash

By ERWIN CHLANDA "Parrtjima – A Festival in Light attracted more visitors to the Alice Springs event than ever before and generated almost $10m in...
Read more
Issue 14

Mark by mark, finding his way