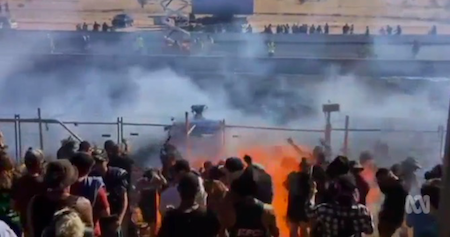 Sir – NT WorkSafe has accepted two enforceable undertakings for the 2017 incident when 14 spectators received serious burn injuries during a burnout competition at the Red CentreNATS.

Enforceable undertakings and prosecutions were both sanctions under the Work Health and Safety (National Uniform Legislation) Act 2011, and the decision on which sanction to use was based on achieving the best health and safety outcomes for Territorians.

Car Festivals have committed to spend more than $255,000 on activities that include providing safety equipment and building volunteer capacity with the aim of improving safety at NT motorsports events.

NT Major Events will spend more than $944,000 on activities that will not only improve safety at organised public events, but also improve safety at community events by building the knowledge and capacity of the volunteers and organisations running them.

Large numbers of Northern Territorians and visitors attend these events.

The incident at 2017 Red CentreNATS highlights the importance of safety at public and community events due to the potential for multiple injuries, and the possible lasting effects on the injured, witnesses and first responders.

I requested an additional assessment in April of both enforceable undertakings after further information was provided by the lawyer representing eleven of the injured spectators.

That information and the views of the injured 11 have been considered; however prosecuting both companies would not provide the tangible benefits of making improvements to prevent further incidents from occurring at public and community events.

The question of compensation has been raised since this incident occurred.

The work health and safety laws and sanctions available to the regulators are not the correct mechanism for resolving disputes around compensation.