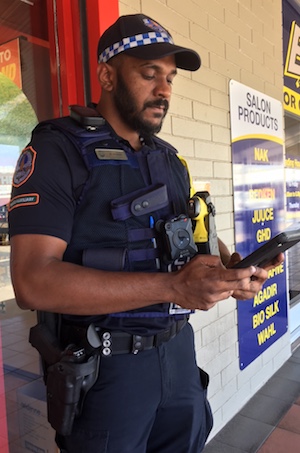 How much does the Point of Sale Intervention – cops at bottleshops – rely on bluff?

Some say all that counts is that it works. But will people wise up and call the bluff, and will the enormous POSI costs be yet another Gunner Government flop?

And in the meantime, is it really working? Or is the racial profiling, of which there is ample anecdotal evidence, offsetting any gain?

How often you are asked by a POSI officer to show your ID seems to depending a lot on whether you are black or or not.

Under the Liquor Act police officers, including police auxiliaries, and liquor inspectors can impose on you some fairly drastic measures.

Having your car confiscated is one of them.

So imagine yourself sitting in a mate’s car, outside Yeperenye shopping centre. You have a sixpack on the back seat, and your mate’s just come back from checking his postbox across the road.

An “officer or inspector” as the law describes them – let’s call them officer – stops your mate from driving off.

Both you and he are required “to follow any reasonable direction to allow the officer or inspector to exercise a power under this section,” says the law.

You will be required to state your name and address, show an approved ID and “answer questions about the information contained in the approved identification to confirm that the information is accurate and to find out if the customer is prohibited from consuming liquor.”

You may then be asked by the officer where you intend to consume the liquor.

You may then say, words to the effect: “I am going to consume the liquor in a location where it is legal to do so.”

That of course would include all the national parks surrounding Alice Springs, and 10,000 or so dwellings and several thousand commercial premises and workshops where Friday after-work drinks are a time-honoured tradition.

Having received this answer, is the officer entitled to probe further? Or would that be an impertinent intrusion into your private life? Are you required to give further answers? The law is silent on this.

Purchasing and possession of alcohol in a public place in Alice Springs is not prohibited, but according to anecdotal evidence, when someone nominates a dry area as their domicile, they are refused the purchase. Is that so?

Consumption in a public place is prohibited  – but you haven’t consumed any, and try as he (or she) may, the officer would not find any proof that you’ve broken a law.

Yet you are not free to go. What happens next when the person in possession of alcohol provides no further answers?

Aren’t you innocent until proven guilty – or has that gone by the wayside? And what has happened to the right to remain silent?

You may then need to state whether you intend “to provide any of the liquor to another person.”

At this point your patience may be running low, and you may say: “Officer, in all probability I will be drinking three of these stubbies and my mate here the other three. So, yes, I am going to be providing liquor to another person.”

As a consequence of that the officer “may investigate whether either or both of the following apply to the customer [you] or the other person”: a prohibition or a bail condition.

And now it gets really tricky.

It seems the three months training of a police auxiliary on POSI assignment must have included advanced training in psychology – or telepathy? fortune telling? – in addition to the use of a taser, a chest-mounted camera, handcuffs and a 9mm 12-shot Glock pistol.

Because now the officer must look deep into your psyche, and work out what you are a likely to do in the future: On “reasonable grounds” he or she must decide whether “an alcohol-related offence is likely to occur”.

The law is silent on what “reasonable grounds” are – maybe something like this: Don’t like the way he looked at me … mmmmh, there was that momentary hesitation in one of the answers … better safe than sorry. 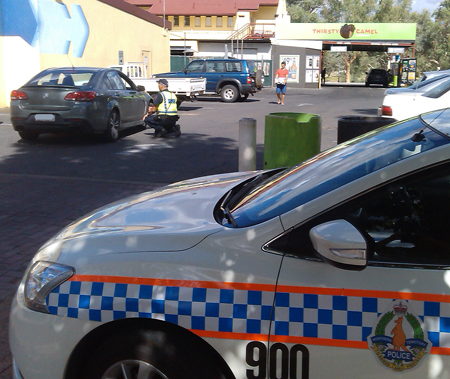 At this point the officer seizes your sixpack and prevents you from entering the liquor shop.

That all this may be an unlikely scenario is part of the problem: Confronted by a heavily armed authority figure, how would a person act whose address on their driver’s licence is not in the Golf Course Estate but Hoppy’s Camp or Hidden Valley?

Would he or she saying to the officer: “There is no law against me buying a legal substance and dealing with it in any manner that is legal.”

Or is that person – well – going to be bluffed and slink off? Is there some nasty racial profiling in progress?

The liquor buyer will already have been through one filter – the scanning of his or her ID, a process conducted by the liquor vendor and at no cost to the taxpayer.

If the intending buyer is a banned drinker that check would have ruled out any purchase.

If the vendor fails to conduct that process adequately he will face being shut down for a few days.

So why the POSI? The Gunner Government is persisting with this fraught system which has repeatedly been exposed as being expensive.

In May 2016 the NT News quoted police sources believing that “the overtime bill for POSI officers has reached the seven figure mark, with officers filling the extra hours at Tennant Creek, Katherine and Alice Springs on a daily basis.”

“This is the first time any dedicated resources have been provided to monitor bottle shops, and will enable police officers to get back on the beat and into communities,” she said.

In November last year Ms Fyles said amendments to the Liquor Act will “provide powers to specialised police officers to undertake covert operations to capture anyone purchasing alcohol on behalf of someone on the BDR … giving the Commissioner of Police the power to place a 48 hour suspension on licensed venues deemed to be irresponsibly selling alcohol and increasing penalties for secondary supply.”

Two weeks ago we quoted the police that in addition to 120 new officers, “75 Police Auxiliary Liquor Inspectors will join the ranks.

“The Northern Territory Police Force is on track to grow to a 1500-strong force by mid-2020 through continued recruitment.”

At present the NT Police Southern Command has three times as many police officers per head of population when compared to the national average.

Deputy Opposition Leader Lia Finocchiaro declined to comment and was not available to be interviewed.

We sent a draft of this report, and several questions, to the police ahead of publication, with requests for comment and to offer the right of reply. We had not received a reply before the nominated deadline but will publish it as an update if and when it is received.