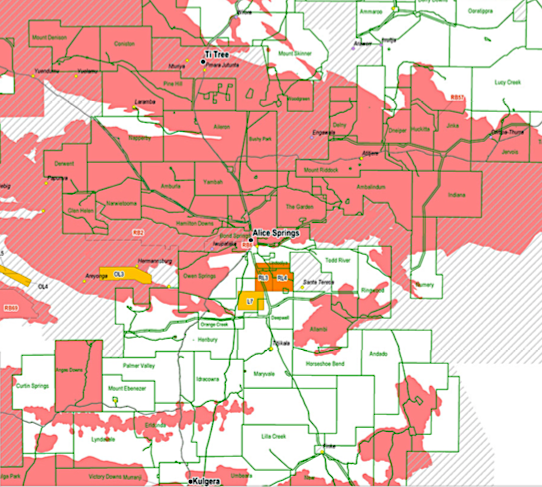 Today’s invitation to comment, with a deadline of just four weeks away, about “no go” areas for fracking has been slammed by Arid Lands Environment Centre CEO Jimmy Cocking.

He says this invitation to comment from the NT Government should have come a year ago, and the time allowed for this “most important recommendation” is far too short.

What’s more, this morning’s media release from Resources Minister Paul Kirby suggests that decisions have already been made.

The Alice Springs News put this to his media minder who neither confirmed nor denied it.

The release says the government’s no-go zones “will cover 48.44 per cent of the Territory.”

And it says: “The Inquiry determined, through its research and consultation, there should be areas that are off limits to any petroleum exploration or production activities, due to these areas’ unique values and their important role in providing environmental, social, health and cultural benefits to surrounding communities.”

Says Mr Cocking: “They have made up their mind and it is up to us people who vote and who live here to push back on that. We disagree. They will need to change ‘will’ to ‘may’.

“The fact that [the minister] is stating it like this is of concern. I would suggest to people that this is not a done deal”; they should tell the government “that they don’t want their pastoral station or their land trust or their water catchment to be fracked.”

Mr Cocking, who is a member of the Town Council, says that body should also make itself heard in this debate.

He says Territorians need to have much more time to assess the possible consequence of fracking in their neighbourhood – or in the NT as a whole: “We don’t want to see fracking in the Northern Territory.”

He says one kilometre buffers around bores are of no value – frackers can now drill horizontally for seven kilometres.

According to the maps (pictured) released today, fracking is already permitted in close vicinity of the water supply for Alice Springs, or proposed to be permitted. (The red areas are no go, the hashed areas are Aboriginal land, fracking can be carried out in the white areas.)

“The tail is wagging the dog,” says Mr Cocking.

The minister says in identifying these fracking areas the Territory Government “has taken into consideration a number of existing factors such as granted exploration permits, Aboriginal Land and current land use” and it will “consult with traditional owners … to determine whether or not they would like to declare areas within Aboriginal Land as reserve blocks.”

The Land Rights Act, through which half the Territory land mass has been returned to Aboriginal people as inalienable freehold, allows them to exercise a veto right over mining.

Mr Kirby’s announcement today shows that some Aboriginal land has been declared a no go area, some has not.

This appears to give Aboriginal owners the right to permit fracking on areas declared as “no go” by the government, or prohibit it in areas where the government allows it. And this would apply to half of the NT’s land mass.