Anti-fracking Greens: Are jobs for the dole schemes legal? 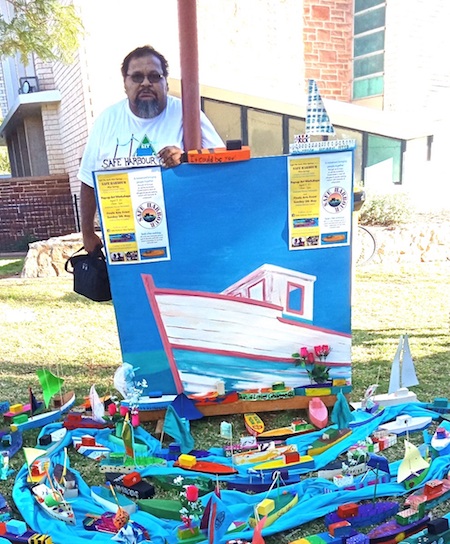 A big “no” to fracking tops the list of priorities for the Greens candidate in Lingiari, George Hanna.

He’s even putting anti-fracking independent candidate Hamish MacFarlane, who is close to 1 Territory, in second place on his how to vote card.

AT RIGHT: Mr Hanna with a display of Safe Harbour, a refugee lobby, in Todd Mall last week.

This is ahead of Labor’s Warren Snowdon, the sitting candidate, who is giving the Greens his number two slot.

Mr Hanna says Labor “have agreed to go on with fracking.

“No disrespect to Warren, I think he is a nice bloke, I’ve known him personally for a long time, since I was a kid.

“He’s been in politics for the Labor Party for a long time, but he has done very little for Aboriginal people.”

Mr Hanna, who lives in Berry Springs, is on a disability allowance because of a kidney complaint requiring dialysis three mornings a week.

He says he’s had no luck finding a job for the remaining time: “Unfortunately no-one wants to hire me even though I have a degree in education.”

NEWS: We’ve asked you to nominate the five most important reasons why people should vote for you and fracking tops your list.

HANNA: We are one of the few parties which are very firm on fracking. The Greens don’t want any fracking at all. We don’t have a problem with mining gas in the conventional way, but there are documented facts from overseas of what fracking has done to water supplies.

NEWS: The vexed issue of work for the dole came second on your list.

HANNA: We need to look at the legality of working for the dole, people without qualifications being forced to operate large and small machines and equipment, like tractors, lawn mowers, chainsaws and so on. We need to investigate insurance provisions for when someone gets injured. The Greens think Newstart should be increased by at least $100 a fortnight before they implement work for the dole. People are going to St Vincent de Paul, Red Cross, the churches for food handouts. $640 or so is not going the full distance of a fortnight. [Newstart] has not been increased since the mid 1990s.

NEWS: Where do you stand on job opportunities?

HANNA: Medical marijuana should be legalised. Aboriginal communities in remote areas could benefit from growing cannabis for medical use as a source of income. It can also be used for making hemp ropes and mud bricks.

NEWS: Should cannabis be legalised for recreational use?

HANNA: That should be investigated. It could be modelled on how it is available in Amsterdam, where there have been cannabis cafes for 30 or 40 years. No-one has gone crazy over there, picked up a gun and shot people. Maybe we should investigate how the Dutch have been doing it so successfully. People from here can go over there and legally smoke cannabis. 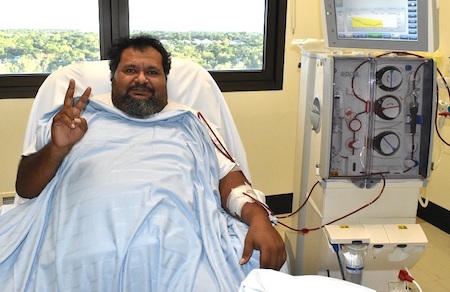 HANNA: The Greens say bring them to Australia now. Bring them here, integrate them in to the Northern Territory population as soon as possible. It is the humane thing to do. [According to the Refugee Council, the current refugee figures are 359 in Naru and 547 PNG, Total 915. In 2012 4000 were sent there. Fewer than 1000 left.]

NEWS: Would the majority of people of Lingiari be in favour of that?

NEWS: Would Lingiari have enough jobs for such an influx of people without taking jobs from current locals?

HANNA: Divide them up into four large towns. Get them working on projects such as solar power arrays, their construction and maintenance, to provide power for these towns. They could also be growing medical cannabis. They could be a quick labour force. Pay them a decent wage, $18 or $20 an hour for starters. There are more than 150 houses south of Darwin, ex-RAAF base, empty for at least two years. There are about 100 demountables from Inpex, growing cobwebs. Larrimah has a population of about eight or nine people. You could put 50 houses down there for Manus Island refugees.

NEWS: Do you think we have very low involuntary unemployment, that pretty well anyone who wants a job can find one?

HANNA: Some people are fussy eaters when it comes to work. They don’t like doing menial jobs like cleaning or working at Maccas or Red Rooster. It’s all about choices and training. What’s happened to places like Batchelor Institute that was once such a great institution? 4000 or 5000 students were going there, and now it’s a graveyard. Maybe Batchelor Institute needs more funding to put is back to its glory days of the late nineties. 40 or 50 courses were taught there. Maybe we need to investigate what happened with the administration of the Batchelor Institute. Inject more funding, in Alice Springs and Batchelor campuses. Get people back into training that reflects the needs of Lingiari – mechanical trades, carpentry, health workers.

NEWS: What’s your view about the fact that the greatest number of graduates only get as far as Certificate Two? Many fewer get to level Three and Four or higher, which is what employers require.

HANNA: You have to look at the academic structure of the courses. I imagine the people you’re talking about are from bi-lingual backgrounds, from out bush. They may need to do part of their training, maybe half, by working on site, with qualified tradies from the mainstream. Tailor the course to the needs of people living in the bush. They could be assessed on their practical work as a requirement for Certificate Four. And that should get them a fairly well paid job.

NEWS: Training on the job as well as in the classroom?

HANNA: Yes, mixed mode. The theory in the classroom, say a couple of weeks, and then out on site for two or three months.

NEWS: You are listing youth issues in your line-up of priorities.

HANNA: Should Don Dale be rebuilt? There are only about 15 kids there, as I understand it. 100 kids are out on parole, being looked after in other places. [The juvenile detention facility] should be where kids can breath air, not stick them in the middle of the city or suburbs, a place where there is a lot of land, Humpty Doo, Berri Springs. Do something with these kids instead of buying them pizzas and giving them cups of tea and watching TV. Tennis, squash. When I was 14 and 15 I was cutting grass around town, making $300 a weekend.

Safe Harbour is a movement bringing people together – through art – to ask the Australian Government to treat all refugees and people seeking asylum with humanity and compassion, says Project Manager in Alice Springs, Karren Lau.

“We are raising awareness of the unfair treatment at offshore processing on Nauru and Manus Island.

“Our balsa wood boats were painted by the public and other community groups in Alice Springs; they symbolise we are welcoming of refugees and asylum seekers.”

Other main members and volunteers are Christabelle Baranay, Penny Watson and Rene Gates.