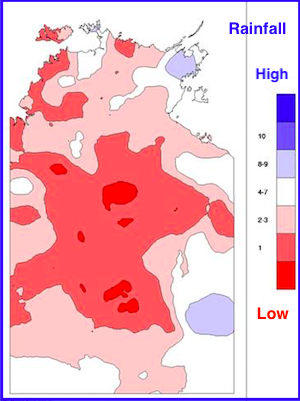 Darwin recorded its hottest night on record, only getting down to a stifling 30C overnight on December 12. The total rainfall for Darwin Airport was 70% or more than half a metre short of the long term average, the seventh driest on record since records began in 1941.

An appeal to save water in the Top End was made today by the government.

Alice Springs recorded 97.4mm of rain, just under half its October to April average, with the average daytime maximum temperature being 36.1C.

This is 2.8C above average, according to the Bureau of Metereology.

RAIN! Not much but better than a poke in the eye with a sharp stick: 2.4mm at the airport overnight.