A change in Lingiari? History holds some clues. 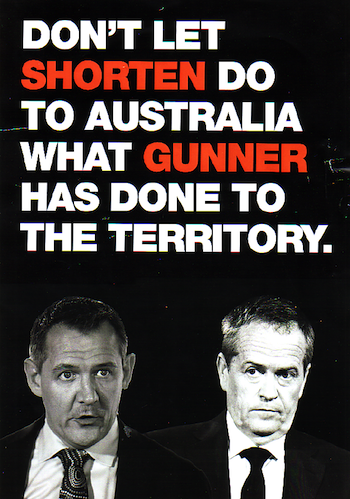 AT RIGHT: Negative campaigning by the CLP.

Anti-fracking candidate Hamish MacFarlane, representing 1 Territory, seems to be getting an easy preference ride in Lingiari from CLP who are putting him in number two position. With Labor he is in number four, out of the six candidates running.

The big ones are not going to gain much in return: Mr MacFarlane says his how to vote card will say put him first, take your pick for the 2nd, 3rd and 4th positions but put Warren Snowdon (Labor) and Jacinta Price (CLP) 5th and 6th.

Voting for the centre-right 1 Territory is seen as making a stand against fracking without having to vote for the Greens.

Both big parties are putting Regina McCarthy, of the far-right Rise Up Australia party, last.

Mr Nelson was keen to get a whiff if the huge seat is in for a change, for over half a century in just four hands, followed by a string of single term Members, and now held for nearly 30 years by the incumbent Warren Snowdon.

He says the CLP’s Jacinta Price is “more of a serious challenge” than earlier CLP candidates, but he thinks her appeal is more in the urban areas and how much she will appeal to remote communities is “difficult to say”.

What we do know is that Labor has the Green’s George Hanna in second place, followed by Daniel Isaac Hodgson (Palmer’s United Australia Party). The CLP’s Jacinta Price is in 5th position.

The CLP’s how-to-vote card has Palmer’s UAP in third place (behind MacFarlane) and ahead of Snowdon and Hanna.

Note to the donkey voters: Snowdon is on top of the ballot paper and Price at the bottom.

Mr Nelson says from the 1920s the NT had just four MHRs for more than half a century: Harold Nelson (Labor), Adair Macalister Blain (Independent), Jock Nelson (Labor) and Sam Calder (CLP). They could vote only on Territory matters for much of this time.

Full voting power was introduced in 1968.

He was followed by Paul Everingham, who was the first Chief Minister of the self-governing NT. He  became tired of politics and did not seek re-election in 1987.

This is when Snowdon came on the scene for his three decades in Canberra.

And herein lies a clue for what may be happening now: The NT Government had run into financial difficulties, public service cuts were made, and Snowdon was swept into the seat on a protest vote: At the time all of the Territory was a single Federal seat.

And there he stayed – with a one-term interregnum by Nick Dondas (CLP) in 1996 when John Howard became Prime Minister.

Mr Nelson says there are two questions raised by Snowdon’s record time in positions of government: How come he did so little? And despite this, how come people kept him in Federal Parliament?

And where did he acquire his baffling cunning to make enough people vote for him?

Mr Nelson says there is now much excitement about road funding. But this follows decades where nothing was done: The Stuart Highway from the SA border to Port Augusta had been sealed just before Snowdon got into Parliament.

The railway line was built during Snowdon’s time but it was Howard who was pulling the levers and CLP Chief Minister Shane Stone signing the cheques for one-third.

The east-west link, now known as the Outback Way, is still not sealed.

And despite Snowdon’s close links with the Central Land Council, the misery in the bush – health, education, employment, housing, enterprise development and all that – remains basically unchanged.

Yet when Snowdon was on the ABC panel for the 2001 NT election he could call the result – the first Labor win – about half an hour into the count.

Mr Nelson says achievements of other long-time politicians would fill a great deal more pages in the history books: Bernie Kilgariff, for example, was a key figure in the first fully elected Legislative Assembly in the NT. He was the Territory’s first Senator.

One thing that effluxion of time has surely created for Snowdon: Familiarity with the bush voters who reliably vote Labor at a ratio of two to one.