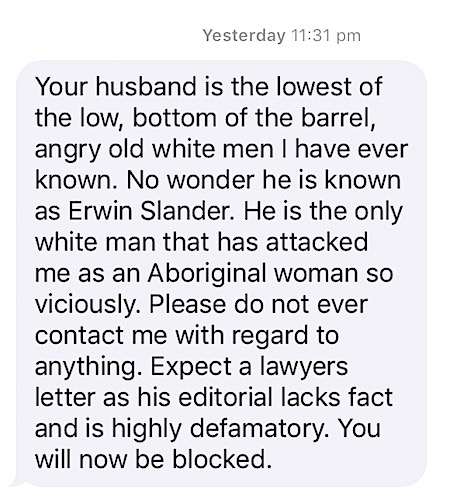 A hysterical dummy spit by Jacinta Price, following publication of a report on Monday critical of her record as a town councillor, is unbecoming of a candidate for a major party in a Federal election.

The CLP candidate for Lingiari, having received 24 hours notice of the report of her dismal performance on the Alice Springs Town Council, has described the editor of this newspaper – me – as “the lowest of the low, bottom of the barrel, angry old white men [sic] I have ever known.

“He is the only white man that has attacked me as an Aboriginal woman so viciously.”

While the race of Ms Price was not mentioned at all in the report, she felt entitled to refer to mine, adding to it that I am old.

She asserts that I am known as “Erwin Slander”. She does not disclose by whom.

Ms Price did not respond to our advance notice of the report, including a draft of almost all of the text subsequently published, except for minor subbing changes.

Hi Jacinta, you’re invited to respond to the draft below. I’m going to publish the report at 3pm tomorrow, so if you wish, please get back to me by 2pm tomorrow (Monday).

Also, you’re invited to let me know by COB Wednesday the 10 or so reasons why you think people should vote for you in Lingiari.

I’d like to use these suggestions in an interview with you on Thursday next week, April 25. If you are happy with that please nominate a time (in the afternoon).

I sent a second email at 8.45am on April 22 about an addition to the text, still more than five hours ahead of the deadline for a response.

Our comprehensive notice of the content of a report, well ahead of publication, is a privilege few journalists would afford their subjects.

But Ms Price did not respond until 11.31pm yesterday when she sent the impertinent text (pictured at top) to fellow Alice Springs News journalist, Kieran Finnane, who, by the way, had not contacted Ms Price with regard to Monday’s report. 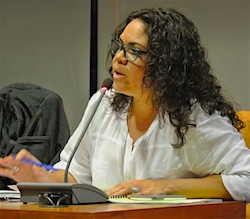 The remainder of Ms Price’s text is surely an abrogation of an election candidate’s obligation to participate in the democratic process, which includes answering questions put by journalists: “Please do not ever contact me with regard to anything. Expect a lawyer’s letter as his editorial lacks fact is highly defamatory. You will now be blocked.”

Ms Price at a meeting of the Town Council from which she has resigned despite her pledge to serve a full term.

The report, in reality, consists almost entirely of facts: they speak for themselves on Ms Price’s record.

The locally owned and operated independent Alice Springs News is its 26th year of publication. It had 20,339 readers and 160,415 page views in the past 30 days (Google Analytics).

As editor, I have been a full-time journalist in Central Australia since 1974, providing news, magazine and documentary material for national and international text and television media.

Kieran Finnane has also worked in media for over 30 years, is an author and contributes to quality national journals.