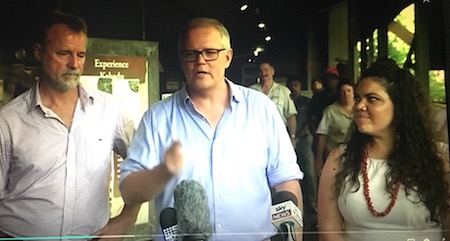 Voters considering CLP candidate for Lingiari Jacinta Price for their number one choice on May 18 might want to examine her performance when she last sought the public’s endorsement.

They will find that in the Alice Springs Town Council election on August 26, 2017, she was by far the top scoring candidate.

However, a year and a half into her four year term she went back on an unequivocal undertaking to serve to its end. In fact, she announced her intention to stand for Lingiari just six months after being elected to council.

Usually introduced as an Alice Springs councillor, her contribution to the running of a struggling town had been negligible, her meeting attendance grossly inadequate.

And Code of Conduct complaints – all found to have been vexatious or without foundation – that she or people associated with her had apparently lodged against three fellow councillors had the council teetering on dysfunctionality for months. (CORRECTION: see at bottom.)

There has still not been confirmation that she or an associate were the complainants, but a response from her to the Alice Springs News last week strongly suggests this to be the case.

Her resignation last week could mean that council will need to spend about $90,000 for a by-election to fill her vacancy, although an acolyte suggested she could be a council member as well as a Member of the House of Representatives.

According to section 39 of the Local Government Act, governing the resignation of a councillor to stand as a candidate for election to the Legislative Assembly or the Commonwealth House of Representatives or the Senate, if the former member is not elected, he or she can be is reinstated as a member of the council.

The News asked Ms Price, on the day the 13th Council had its first meeting, about rumours that she had political ambitions other than the town council, and might resign before the end of the term.

The facts don’t bear out this promise.

Until this month there had been 20 full council meetings (as opposed to the committee meetings on the alternate fortnights which prepare the groundwork for decisions but do not make them).

This year Cr Price was absent for the January, March and April meeting when she tendered her resignation in writing.

She attended the February meeting by telephone.

This has its severe limitations: a councillor participating by phone cannot take part in the confidential sessions.

Certainly some council decisions are taken in these sessions and some policy direction is set. For instance, the current discussions about the proposed land swap (with the NT Government, of the Civic Centre block for the old Anzac High School site) are taking place behind closed doors.

A councillor not entitled to take part of course cannot represent their constituents.

In 2018 Cr Price was absent from the January and July meetings, and attended by phone the March, August and November meetings – only the “open” sections, of course.

Only in the first year (the four months left of it, September to December 2017) was her attendance perfect.

During the second meeting of the 13th Council, October 2017, she seconded 26 motions moved by Mayor Ryan.

Cr Price’s own record of motions is dismal for someone who had acknowledged that “there is much work to be done”.

Judging from regular attendance at meetings by our journalists, and from the meeting minutes, none of the issues raised by Cr Price were part of a coherent, well developed and costed strategy founded on research and public consultation.

This criticism may well apply to the motions of other elected members but they are not the ones seeking Federal office and neither did they have the highest level of support from the community that Cr Price attracted in the last council election.

Not counting motions that are no more than accepting reports or minutes, she moved motions about these subjects (number of motions in brackets):-

October 2017 (8): The Aboriginal flag on Anzac Hill, NBN, a concert and seniors.

April 2018 (7): Bicycles in the Mall, MOU with the government to regard the Anzac Precinct as the “preferred” location for the National Aboriginal Art Gallery, cancer nurse.

September 2018: No motions of her own but she voted with Mayor Ryan and Councillors de Brenni, Paterson and Auricht against a motion that Anzac Precinct should not be the preferred site for the gallery.

This double negative means that Price, Ryan, de Brenni, Paterson and Auricht were supporting the NT Government’s choice of the Anzac Precinct, while Councillors Melky, Banks, Satour and Cocking were opposed to it.

This, of course, was knocked on the head when subsequently senior Arrernte people objected to the government’s choice.

December 18 (1): Sexual harassment in the workplace.

At the time of publishing, Ms Price has not responded to an invitation to comment.

[ED – The meeting minutes of the council are on its website.]

CORRECTION: Statements last night reveal that Jacinta Price and her parents were the source of three Code of Conduct complaints  with respect to two councillors, Crs Cocking and Satour, but not three. Neither Jacinta Price nor people associated with her were complainants against the third councillor who was the subject of a Code of Conduct complaint in 2018, Cr Eli Melky.