The huge cash splash for Parrtjima, as the NT has record debts, coincided with incomprehensible government penny-pinching that will cost Alice Springs $2m in lost earnings next year.

Touting as an achievement that Parrtjima is growing faster than most other events around Australia, as Tim Watsford of Major Events did during the wrap of the 10-day festival on Sunday night, seems a bit of a stretch.

It’s like saying: “Gosh, haven’t we done well. We’ve bussed a lot more people to a $2m festival where they didn’t have to pay a cent to get in.”

As one indication of the festival’s economic impact, a survey this week by the News has found responses from hotel managers ranging from pleased to positively enthusiastic.

Meanwhile for the sake of $70,000 Major Events let slip through its fingers the 2020 Classic Outback Trial which last year brought 420 well-heeled people into town for 10 days, racing their vintage cars on near-by bush tracks and returning to town every night.

The event is now likely to be held in NSW, says organiser Philip Bernadou.

Another key question remains about Parrtjima. It is developing enjoyable, informative and popular events involving locals “on the ground,” with Sunday night’s Baker Boy performance (at top and video below) a smash hit, especially for Aboriginal youngsters.

The question is, does Parrtjima need to shine lights onto the mountain range?

The suggestion is that nature in The Centre needs a helping hand from technology, a notion that is as absurd as it is counterproductive for our tourism promotion outside of the event.

How much would the event cost without the lights on the hill?

We put the question to Mr Watsford and the producer of the Sydney-based AGB Events, Rodney Cambridge.

“There are so many elements to it, it’s a little bit hard to say what the break-down is,” said Mr Cambridge.

“There is the ranges lights, the lights that go into installations, the lights in Todd Mall. It is a light festival.

“The festival is growing every year. Now we’ve got the knowledge playground, film and music …”

NEWS: If the projection onto the mountain range were removed from the program, what would be the saving? 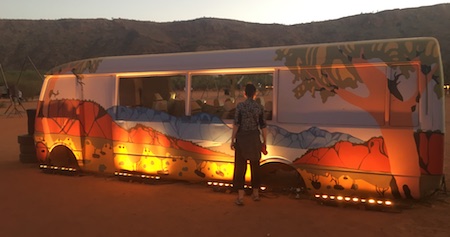 WATSFORD: We couldn’t answer that.

NEWS: How much of the $2m budget goes to Sydney and how much stays in Alice Springs or in the NT?

WATSFORD: That’s a hard dispute. We abide by the 30% buy local [rule], as per the NT Government. Yes, AGB are an interstate provider but the buy local policy also applies to them. Local traders get a 30% head start, 30% loaded to local providers.

Mr Watsford says the Central Australian Aboriginal Media Association (CAAMA) is especially supported, along with infrastructure such as the Desert Park.

WATSFORD: We are trying to build capacity for locals as well.

WATSFORD: I’d say in excess of 80% we spend locally.

Compared to that, the request for financial support for the car rally is small change. 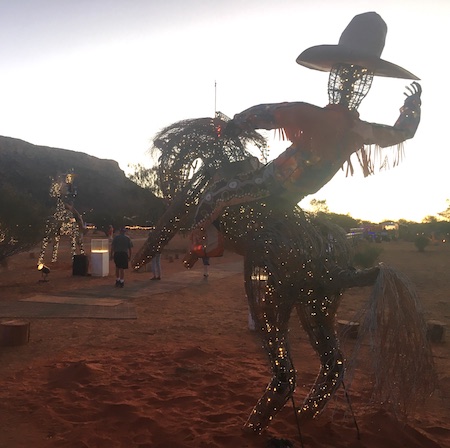 Mr Bernadou says he had asked Major Events for $120,000, on these grounds:

• The cost of staging the event in The Centre is vastly greater because of the extortionate airfares for race marshals and officials, and cars for them have to be hired whereas they can drive their own to a NSW location.

• Cattle station lessees here allowed the use of their tracks in exchange for minor government works, such as grading and servicing grids. But this was not done adequately last year and some lessees have withdrawn their cooperation.

• Transport costs for the competition vehicles are much higher.

Meanwhile the Parkes, Dubbo and Bathurst local governments are “keen for us to come,” he says.

For example, Parkes is offering to underwrite the welcome function to the tune of $15,000. Last year’s contribution to that by the Alice Springs Town Council was $5000.

In another example of apparent wasted opportunity, Lasseter COO Craig Jervis says the Convention Centre, managed by Lasseters, is unused during the Masters Games.

It can be used free of charge by the government which, in any case, owns it.

Yet the government is instead spending $60,000 for a large white tent on the council lawns.

That is about the amount which could have brought back next year the Classic Outback Trial and its $2m local spend.

Will admission be charged?

He says it was always going to be a free festival but there will be “elements around the event that the demographics want, perhaps the culinary, a dinner somewhere, or a glamping [glamorous camping, for the uninitiated] experience, and generate revenue for local providers”.

Should the event move south of The Gap, as traditional owners are now promoting for the proposed Cultural Centre and the National Aboriginal Art Centre?

WATSFORD: I think the Desert Park has been a beautiful home for Parrtjima. As the event grows we’ll be looking around for areas in Alice Springs. We’ve invested in the Todd Mall precinct this year. What else? We don’t know yet. But yes, we want to grow it though the Alice Springs region.

NEWS: Last year there was a fantastic jumping castle for the kids. This year you have the maze. Why are these not used around town during the rest of the year?

WATSFORD (pictured): It’s only certified for a 10 day period, for Parrtjima. We’re doing work now to make sure these assets are used more than for just the 10 day period. We’ve had some requests, some in Darwin, some locally, some at Uluru. The lights in Todd Mall are there permanently.

In response to the News’ hotel occupancy survey, Mr Jervis said Lasseters had a 13% increase compared to the same period last year.

Double Tree at Hilton manager Todd Grierson says the decision to move of the Festival from September to April was “absolutely right.”

September is normally a strong month, while April was “traditionally quiet” and occupancy hovered around 50%.

“This year we were close to booked out during the whole Parrtjima festival,” says Mr Grierson, and “we had super feedback” about the quality of the entertainment.

Another accommodation property had an increase of about 5% compared to the same period last year.

Mr Watsford says it will take at least a month for Major Events to analyse the visitor numbers (local vs interstate and international visitors).

The News asked  for the 2018 attendance figures but we have not received them.