Home Issue 12 Wards for Alice council, including one for town camps?
Issue 12Volume 25

Wards for Alice council, including one for town camps? 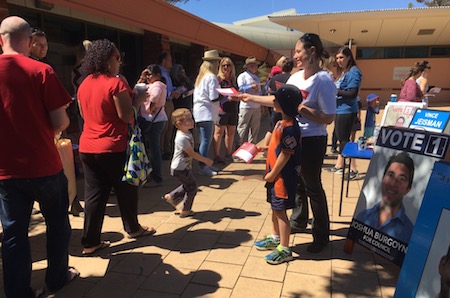 Should the local government system of representation change from a single electorate to wards?

Right: Voting day in the 2017 council elections. Photo from our archive.

And should the number of councillors increase, from the present eight to 10 (plus mayor)?

Councillor Eli Melky thinks so, or at least these matters should be seriously discussed as part of the review council is required to have before the end of this term. And he goes further, suggesting five wards with two councillors from each, with one set aside for the Alice Springs town camps.

The other wards he proposed to be Araluen, Braitling, Sadadeen, and Gillen.

He said the town camps should be represented by people residing in them; the criterion would be residency not race.

Non-Indigenous residents of town camps are rare. In the 2016 Census 100% of camp residents counted themselves as Aboriginal, or Aboriginal and Torres Strait Islander. In a separate question, fewer than 10% listed other ancestries, being Australian (if that is ‘other’), English and Irish.

It is interesting to note the Census count for total residents of town camps: 967. Two councillors representing their interests would thus be numerically disproportionate.

Many more Aboriginal locals live in the suburbs. The total Indigenous resident population, including the camps, in 2016 was 4361; so the camps make up roughly a quarter of that.

Cr Melky was not suggesting that the camps at present are not represented but observed about himself that he has only ever had one meaningful experience inside a town camp. Cr Melky has been on council for eight years, since 2011. 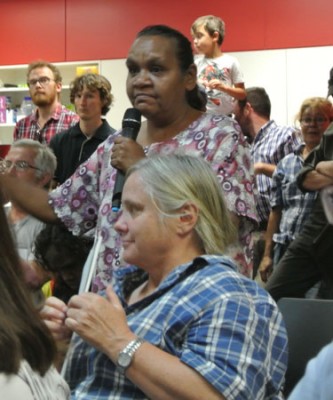 He also commented that it is difficult for representatives from camps to get elected under the present arrangements, referring to the past failed candidacies of Barbara Shaw (recently elected as Deputy Chair of the Central Land Council).

Right: Barbara Shaw speaking against a nuclear waste dump being hosted in The Centre in 2016. Photo from our archive.

The current system of counting, which changed in the 2012 local government elections from the “exhaustive preferential” system to what is known as  “single transferable vote proportional representation” is supposed to broaden council’s base.

In 2017 there were three strongly identified Aboriginal candidates and two were elected (Jacinta Price and Catherine Satour) but there was no candidate strongly associated with the town camps.

It would be fair to say that issues specific to the town camps have rarely been a topic for the current council. An exception springing to mind is the subdivision development of Ilpeye Ilpeye, alone of the town camps to elect to ‘normalise’ as a suburb in the wake of the Intervention, with the potential for residents to own their homes freehold. In council there has been controversy over the standard of subdivisional works by the NT Government, which council is ultimately expected to accept responsibility for.

Council’s relationship with the town camps advocacy body Tangentyere Council has been notoriously difficult, that is to say, in the main dormant.

He also said that it is the work of every councillor to work with all residents, and he didn’t think the town had a big enough population to set up wards.

Cr Marli Banks pointed out that Litchfield has wards, with a much smaller population than Alice Springs.

She welcomed a constructive review looking at giving access to broader participation. She agreed that rural residents should be part of that, saying that they often feel they don’t get value for their rates.

Cr Glen Auricht could only see difficulties in a ward system. He would welcome having representation of the town camps on council but, given the number of language groups involved, he couldn’t see how it would work “without serious argument”.

He recommended that the topic go to a forum, council’s monthly informal meeting (not open to the public).