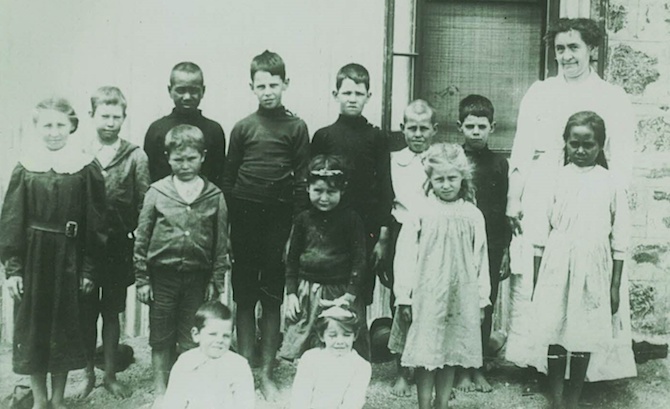 The first school in Alice Springs 1914.  The children are from the Stott, Nicker, Hong and Hayes families.  Mrs Ida Standley is at the right.  The photo was taken by the Anglican Priest William Wilkinson in August 1914.

By teaching white children in the morning and Aboriginal children in the afternoon it is likely that Ida Standley’s school at Alice Springs was the first government multi-cultural school in Australia – in 1914.

The stolen children who lived at The Bungalow in Alice Springs during its earlier years remember with affection the principal care-giver Ida Standley and her dedicated assistant Aboriginal woman, Topsy Smith.

Mrs Standley was appointed the first schoolteacher in Alice Springs in 1914 by the Education Department of SA after representations made by Sergeant Stott and Sam Nicker. She had been a teacher in SA since 1897. At the age of forty-five years in 1914, and whose marriage had broken up, her own future was at the crossroads.

The school opened in June 1914 in a timber and iron building with an official attendance of 25 pupils.

However, Mrs Standley was soon struck by the neglected condition in which she found the “half-caste” children who hung around the town, and she decided that they should be educated as well. Aboriginal children were admitted to the school. Objections soon came from the whites in the town.

This resolute lady stood her ground on the fundamental principle that every child has a right to an education. She negotiated a compromise with the community by teaching the white children in the morning and the Aboriginal in the afternoon.

Sergeant Stott became concerned that the Aboriginal waifs of the town had nowhere to live so it was arranged that two iron buildings were erected adjacent the Stuart Arms Hotel (now the Alice Plaza shopping centre) where these children could reside. Initially the children living in the iron buildings were cared for by Aboriginal woman Topsy Smith who came from Arltunga and had 11 children of her own.

Sixteen children were living in the iron buildings by 1914. More soon came as Aboriginal children were removed from the camps and stations under the 1911 Ordinance. The place became known as The Bungalow.

In February 1915 Ida Standley was appointed matron of The Bungalow with Topsy Smith staying on as houseparent. Living conditions were crude to say the least requiring considerable input from Topsy Smith to keep the place presentable. Ida Standley soon came to love the children with many of them referring to her as “Mum”.

By 1923 sixty children were crowded into the two iron sheds with their carers being Ida Standley and Topsy Smith.

Visitors to The Bungalow described the conditions as appalling, so much so that the Commonwealth government was forced to look for a better site. After protracted negotiations The Bungalow was moved to Jay Creek in November 1928. Both carers were utterly exhausted by this time and did not want to go to Jay Creek. However, both went for the sake of the children.

Many of these children were highly traumatised as a result of being forcibly taken from their mothers whom many never saw again.

Police officers would arrive at Jay Creek with more distressed children as would Aboriginal mothers who had been directed to take their children to Jay Creek and leave them there. Such circumstances drained the emotional capacity of both Ida Standley and Topsy Smith.

For 14 years Ida Standley and Topsy Smith were their mothers and a change of environment without these two amazing women would have given further distress to such lost children. Ida Standley used to like taking the children for walks and picnics into the hinterland of the MacDonnell Ranges and one day a group went for a hike to the imposing chasm that now bears her name.

The Anglican Bishop of Willochra, Richard Thomas, visited The Bungalow at Jay Creek late in 1928. He was shocked at the conditions in which the children were living especially the over-crowding. As well he found it difficult to come to terms with the fact that the children had been forcibly taken from their mothers with no further contact allowed.

In due course the bishop wrote to the Prime Minister Stanley Melbourne Bruce complaining about the terrible conditions at Jay Creek. As a result of the bishop’s initial efforts the site was moved to the Old Telegraph Station in 1932.

Also in 1928 Father Louis de Ridder, the Anglican priest from Quorn, made a visit to Jay Creek and baptised the entire 52 children in one ceremony. He described Ida Standley’s work as: “… a miracle of grace … She has cared for the bodies, minds and souls of these children, and her love has brought about a miracle.”

The same could also have been said about the dedicated service of Topsy Smith. Many of the children identified with her as an Aboriginal surrogate mother.

Stuart Traynor in his book, From singing wire to iconic outback town Alice Springs states: “Ida Standley was made a member of the Order of the British Empire (MBE) in November 1929 for her service to child welfare … Tospy Smith’s dedication and years of hard work were not recognised with any imperial honours.”

John P McD Smith is the son of Father Percy Smith (1903-82), first resident Anglican priest in Alice Springs in 1933. John has written his father’s biography, “The Flower in the Desert.”