Bodhi Perz (at right) argued for a vegan diet – less water needed to produce the food. Rainforests are cut down to create grazing land, he said. Cows produce methane.

Nick Boffa (below) stressed the need for continuing efforts against anything that increases global warning and said: “We need to come together, like we are now, and keep governments in it.”

On the “from little things big things grow” theme, he says every day he picks up at least one piece of rubbish someone else has dropped.

Jordyn  Kindness (below right) says there is a lot of support in Alice Springs for efforts to slow down climate change – more support than resistance. 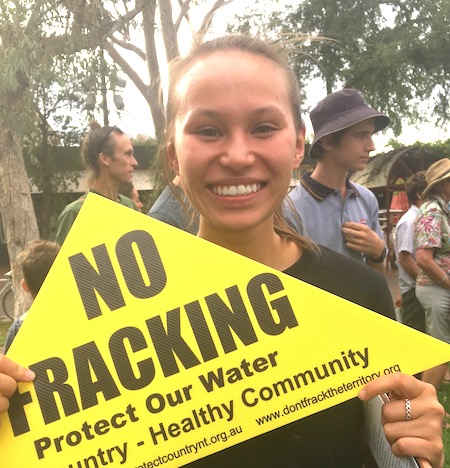 “There are many no fracking signs,” she says.

A woman said some young people are likely to be accused of being manipulated by adults, but the young people should stick to their principles and make themselves heard.

The rally on the church lawns continued as a march, with boisterous slogans, through the CBD, and ended at 9.30am.

Meanwhile Crikey reports that Norway has nominated the founder of the School Strike 4 Climate movement, Greta Thunberg, for the Nobel peace prize ahead of today’s mass day of action.

She began solo protests in August last year, has been nominated by Norwegian Socialist MPs for launching a movement aimed at halting “wars, conflict and refugees” born from climate change.

Her nomination comes as hundreds of thousands of young people are marching across 1659 towns and cities in 105 countries today.

For Australia, this will mean at least 56 separate strikes calling to stop the Adani-Carmichael mine, phase out existing mines, and transition to 100% renewables by 2030, says Crikey.

“The strike has been denounced by conservative politicians and News Corp publications — from The Australian’s expose on the adult support that students are receiving, to The Daily Telegraph quizzing anti-strike students on words misspelled at previous protests,” says Crikey.