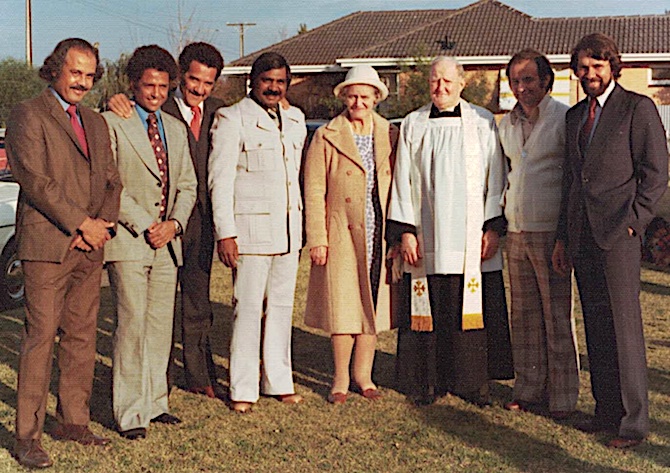 Kwementyaye “Les” Nayda (at left, in 1978), born in Alice Springs in 1943, became the longest serving Aboriginal public servant in Australia and the first dedicated policy adviser on Aboriginal Affairs to a State Premier.

He grew up at The Gap on the outskirts of Alice Springs.  The Gap, also known as Rainbow Town, was a less than desirable residential welfare cottage community where many low-income Aboriginal people had to live.

The facilities provided were very basic and not satisfactory. This environment wasn’t conducive to giving its Indigenous inhabitants, especially the children, opportunities to benefit from better outcomes in life.

In about 1953 Les was placed at St John’s Hostel, Alice Springs for a short time. He came under the care of the local Anglican priest, Father Percy Smith and parish assistant Mrs Lucy Britain.

From this environment Les was able to develop and gain a more effective education, which was to be important later in his life.

St John’s Hostel was started by Father Smith in 1941 as a place where bush children could reside while furthering their education.

Father Smith knew many of the people who lived at The Gap, often visited them and was concerned for their welfare. He spoke out on more than one occasion about the unsatisfactory conditions at The Gap under which Aboriginal people were expected to live.

From St John’s Hostel Les was sent to St Francis’ House at Semaphore South in Adelaide where greater opportunities were available for him to go onto secondary education and beyond.

St Francis’ House had been established by Father Smith in 1946 as a place for Aboriginal boys from the Northern Territory to live, to develop, be further educated and gain skills to enter the workforce.  Les was to become one of the many success stories of this home.

When St Francis’ House closed in 1959 Les was placed into foster care.  He qualified as a wood machinist.

However, he had developed a strong concern for the welfare of Aboriginal people and was determined to become involved in the growing Aboriginal rights movement. He wanted to make a difference.

As part of this he saw a need to become further educated himself.  In 1974 Les graduated from the South Australian Institute of Technology with a Certificate in Community Development.

Les worked on the Aboriginal Task Force and became director of the Adelaide branch of Aboriginal Employment in the Education Development.

He helped establish the Family Wellbeing Program and became the first Indigenous member of the South Australian parole board and resigned in protest in 1987 over the treatment of Aboriginal people in prison.

When it came to defending Aboriginal rights and justice Les could be quite confronting.  He would not back away.  He was fighting for his people.

In 1978 the Dunstan Government appointed Les Nayda as its Chief Adviser on Aboriginal Affairs in South Australia.

As a result of this appointment he became chairman of the Aboriginal Advancement Committee, which was the South Australian Government’s top-level advisory committee on Indigenous matters.

1979 saw a change of government in South Australia, which resulted in Les Nayda becoming policy adviser on Indigenous matters to the new Premier, Dr David Tonkin.  From this position Les played a key role in the Pitjantjatjara Lands Right Act legislation introduced by the Tonkin Government.

By this time Les had become a widely recognized and respected leader in the causes relating to the many areas of human endeavour where the rights of Aboriginal people were paramount.  So much was this the case that in 1995 he was made a Member of the Order of Australia (AM) in recognition of his service to Aboriginal people.

Following his retirement, a family reunion prompted Les to finally return to his childhood home.  In 2006 he returned with his family to Alice Springs to live.

Sadly, less than a year after Les returned to Alice Springs, he suffered a stroke from which he never recovered. He died in May 2014.

William Tilmouth said at the time of Les’ passing: “He was driven by a passion to really get things done that would make a difference, and he had the tenacity to fight hard for what he believed in.”

Writing in the Sunday Mail on 12 July 2014, Adelaide ABC radio host Peter Goers paid this tribute to Les Nayda: “Recently I attended a memorial service for Aboriginal activist Les Nayda. Many Aboriginal people from all walks of life spoke and not once was there a suggestion of self-righteousness.

“There was warmth, generosity, assertion, understanding, some anger, some laughs, some tears and a belief in human goodness and frailty and the knowledge that the journey is always long. From people who have suffered and continue to suffer so much.”

John P McD Smith is the son of Father Percy Smith (1903-82), first resident Anglican priest in Alice Springs in 1933. John has written his father’s biography, “The Flower in the Desert.”