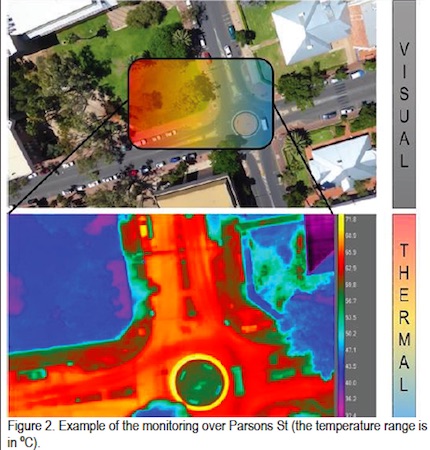 Mayor Damien Ryan is not happy to have the kibosh put on planting trees on the median strip at the northern end of Bath Street.

In fact, to use his own word, he is “infuriated” – to the degree that he walked out of the council meeting last night before a vote on the project was taken, having earlier launched a sustained verbal attack on a council officer’s report.

The Mayor said he does not accept the reasons given by Stephen Baloban, the council’s manager of infrastructure, in recommending against the tree-planting proposal.

The “clear zone” is the area of either side of the traffic lane that should be kept clear, he said in his report, a matter of road safety.

All that is “piffle”, according to Mayor Ryan. (He did not use the officer’s name but Mr Baloban is the clearly identified author of the report in council’s meeting papers, public documents.)

Mayor Ryan was further incensed (voice raised) by the costings provided in the report, which included an irrigation dripper system for $4,500. No other street trees have a dripper system, he said. Council waters them from a truck.

(He didn’t mention another cost, of $6000, for demolition of the median strip.)

A month ago, council supported a resolution that the Director of Technical Services provide a report on “shading streets with trees, for heat mitigation, in consultation with the Acting Director Finance to determine an appropriate budget line.”

The context for this sweeping task was the Mayor’s very specific proposal to plant mature trees in the median strip on Bath Street, between Parsons Street and Wills Terrace.

Mayor Ryan was angry that the report did not address anything about cooling. 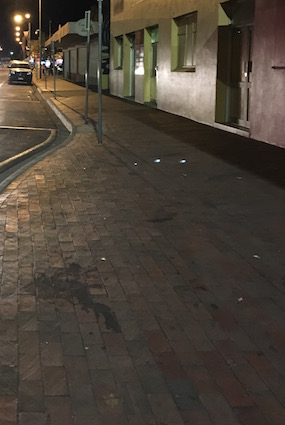 For last night’s meeting he had armed himself with statistics from a heat mitigation study commissioned by the NT Government and carried out by a team from the Faculty of Built Environment at the University of NSW, a summary of which can be found online (on the LiveAlice site).

The statistics included this shocker: that when the ambient temperature varies between 35.0°C and 42.3°C in Alice Springs with wind speeds of 4m/s, the maximum surface temperature of unshaded asphalt pavements in a CBD parking area is 63.8°C.

Shading to 90% in these conditions can reduce the local surface temperature by  26.3°C, with ambient temperature in the shaded area ranging from 35.6°C to 41.3°C.

Left: A tree-less stretch of Gregory Terrace, the only shade is after the sun goes down.

However, a glance at the report, even in summary form, reveals that it is quite complex and technical, and that there are multiple factors to take into account when thinking about how to best achieve cooling at CBD scale.

All this would have been a lot to chew on in just a month even if staff had been made aware of the study.  (The director, Scott Allen was away on military leave, which left Mr Baloban to do the report, signed off on by him and the Acting Director Dilip Nellikat.)

Not all councillors had seen the study either, even though council is supposed to be working in partnership with the NT Government on CBD projects.

Councillor Marli Banks said she had only found out about it in a recent casual conversation with MLA Dale Wakefield. Cr Banks commented that there is not necessarily good feedback to their colleagues from elected members working on external committees.

A logical step for council, given this CBD activity by government, is not to double up on what the government is doing.

Mayor Ryan said last night that this is why he chose “that area” (the Bath Street median strip), but in his original discussion he made no mention of the government’s work.

He also said last night that he would like to ask the person who had made the decision, why a cement slab had been put in the middle of the road.

As I reported previously, the median strip was constructed in 2009, according to advice from council. Mr Ryan was the mayor at the time, in the second year of his first term. It’s a significant piece of road infrastructure that he would surely have been aware of. 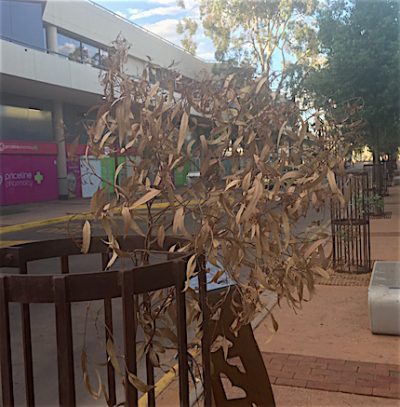 The discussion last night had been shifted on to a more rational footing by Cr Banks, and a lot more had been said on the subjects of heat mitigation and tree planting, when Mayor Ryan came back to Mr Baloban’s report.

It did not address the questions that were asked, he said: “Why has the concrete been laid down Bath Street? It just creates a heat sink … It’s a very poor report by somebody who doesn’t want to do the job. I’m standing on that, so very disappointed that we wouldn’t be looking at planting trees, just laying concrete.”

Right: A dead tree, and some live ones, in Todd Mall. Photo taken on 27 February.

Cr Banks had in the meantime proposed a motion, with some input from other councillors, to the effect that council ask the government for the complete heat mitigation study in order to to inform the development of its own CBD heat mitigation strategy.

The work will be done in the first instance by officers, whose task will be to take the knowledge about the hotspots in the CBD gained from the study, and having noted the works being undertaken by the government, identify the gaps where council attention could be strategically beneficial.

Mayor Ryan did not want a bar of this; he wants to move quickly, get some trees in the ground and spend some money, adding this to his agenda – to help the local business community.

“We hear about businesses struggling, we have an ability to drive some of this work,” he said.

Cr Banks is not against spending but wants to do it “wisely”.

Cr Glen Auricht, in the chair, was also “really keen to get something moving, rather than talking”.

Cr Banks agreed that “doing, not just talking” is important, “but it does require us tying information together”.

It shouldn’t just be a “subjective decision” about where trees might look good, she said.

She also noted than the manager (Mr Baloban) “has his own qualifications”, and council shouldn’t just “throw out” his report. 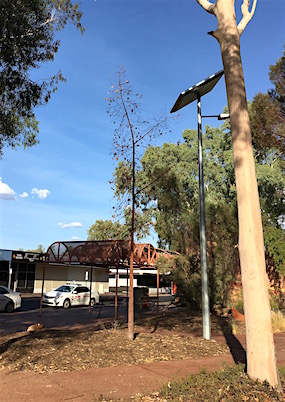 She said she would not be “comfortable planting trees” on the median strip given Mr Baloban’s advice.

Left: In the Gathering Garden, outside the council chambers yesterday – a dead tree and bare garden beds.

Cr Catherine Satour commented: “We are elected to sit here and discuss things thoroughly, our responsibility is to dot the ‘i’s and cross the ’t’s, even if it takes several months.”

She said she was a “huge supporter of planting trees”, but they had to be “in the right place in town.”

As the time approached to vote on Cr Banks’ resolution, to do the heat mitigation analysis before any planting goes ahead, Mayor Ryan left the chamber without a word.

It was carried, four votes to two.

Cr Jamie de Brenni and Jacinta Price were both absent on personal leave.

He voted for the motion, together with Crs Eli Melky, Satour and Banks.

This committee vote, however, is not binding and could potentially be overturned at the end of the month’s Ordinary meeting.

A decision on the recommendation by Mr Baloban was deferred.