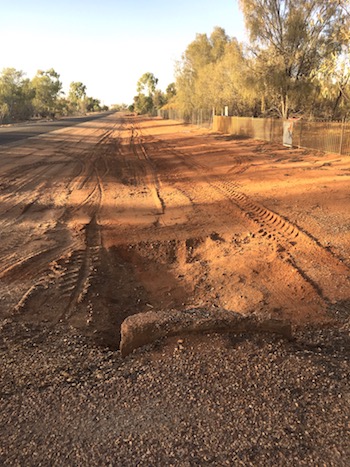 The reaction “I’m going to my local Member” when a government organisation messes up is as old as democracy.

But that apparently is no longer an option when it comes to the Alice Springs Town Council.

“I won’t comment on your story – you need to approach the director or CEO as its operational and the managers need to look after the works and achieve the required standard of verge works.”

That was the response by Cr Glen Auricht, the council’s Technical Services Committee chairman, to me as the editor of this newspaper and a resident (I had made both roles clear to him).

This followed a mini-revolution in Schaber Road, in the town’s rural area, when council staff proceeded to raze native grasses and trees (at right). These had been lovingly nurtured by Bruce Simmons and other residents, after clearing out the buffel grass, creating the most attractive rural road in the Alice Springs area. (I walk there most mornings.)

The council staff had gone to work on the road verges using an assortment of heavy equipment, including a grader.

Six of us approached the workers and to their credit they stopped work, gave us the phone number of a supervisor who swiftly pulled out the crew. However, much damage had already been done.

Cr Auricht’s attitude finds no support from former Deputy Mayor Steve Brown: During his term on the council between 2012 and 2017 he explicitly urged people who had complaints to come to him. 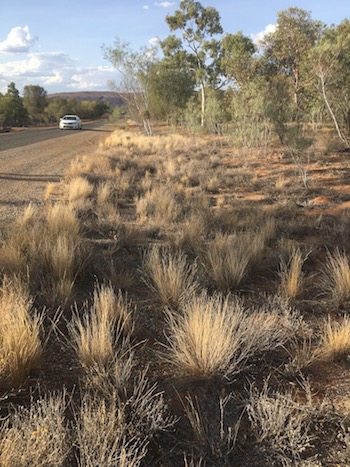 He confirmed that attitude this week when asked to comment on the events described here: “That’s what councillors are there for,” he said.

Mr Brown’s opinion is straight forward: The chain of command is from the elected council member to the CEO who then deals with the staff, with the councillor keeping a watching brief and making sure the complaint is dealt with satisfactorily.

Left: Surviving native vegetation on a section of Schaber Road untouched by the council crew.

On March 6 I described the Schafer Road situation  to Cr Auricht, illustrating each point with a photograph.

The work was, in principle, to clear culverts under driveways, but in reality it had cleared the lightly vegetated verges and turned them into a bit of bare desert. When the crew was withdrawn, the culverts remain blocked.

The work supervisor explained that the culvert clearing is done by a vacuum device which flushes and pumps the soil out – not a big job.

We suggested that clearing of the entire verge was unnecessary achieve this end and  that the sparsely vegetated verges presented  no obstacle to water flows other than slowing it down (which makes the flora grow).

We asked Cr Auricht (at left) to comment: Is there a policy setting a high standard for this kind of work being done, in keeping with best practice for verge maintenance and drainage, respecting native vegetation and, most importantly, neighbourhood amenity?

How can you make sure work plans adhere to such a policy, if it exists? 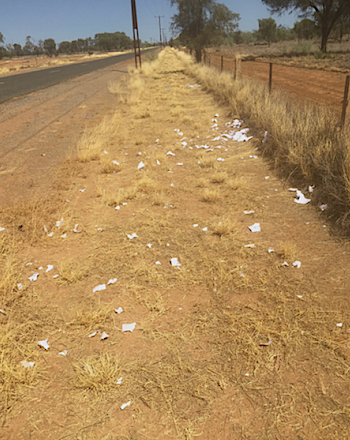 We also raised with him another issue and supplied photographic evidence (at right).

This styrofoam packing case was in one piece on Colonel Rose Drive until the council mover arrived.

We asked, does the mower driver have a rubbish bag and is he meant to use it?

Cr Auricht’s advice to approach the director for answers failed: We emailed the questions to the acting director at 8.22am on Friday, requesting a reply by close of business yesterday, but have not heard from him.