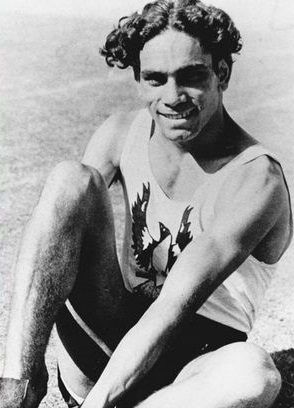 A top athlete denied a chance to compete for Olympic Gold, Wally McArthur lived at “The Bungalow” in Alice Springs before being evacuated to NSW during WW2. After the war he went to St Francis House in Adelaide, became a rugby star in England and was a member of the Aboriginal rugby league team of the century.

Wally McArthur was an inspiration. His younger cousin John Moriarty, who was taken from the same Borroloola area of the Northern Territory, has said: “He could have been one of the world’s great athletes. He just exploded with fire and grace.”

“He was a leader. He looked after us younger kids. He was such a humble compassionate person. Wally set a standard for us, as to what could be achieved in sport.”

Born in 1933 McArthur’s father was a policeman named Langdon, but the authorities, who registered many of these births, gave him the name of McArthur, after the river at Borroloola.

McArthur recalled his removal from his family in a 1998 interview with John Pilger: “It was a government car, because only the government had cars at that time. The driver put me in the front seat with him and he drove around while I waved at my family. I have never seen them since, you know. They were sitting around the camp fire. They didn’t understand what was happening.”

In a 1999 interview with Peter Hackett for The Advertiser McArthur said: “I don’t feel angry about it. I can’t. I just had to get on with my life.”

The bombing of Darwin in February 1942 prompted the rounding up of children in Borroloola who were then piled into army trucks and taken to Alice Springs. John Moriarty, aged four at the time, recalled his removal from Borroloola: “I can remember getting on a truck in a yard. There were a number of other kids in the truck who were also being removed from their families, including Jim and Rose Foster, Wally McArthur and Wilfred Huddlestone.

“The truck went all the way down to Alice Springs. It took several days. In Alice Springs we went to a place called the Bungalow, which was the original Alice Springs Telegraph Station.

“The next thing I remember is the railyard. I was there with my cousins Jim Foster and Wally McArthur and a few others, we all went to see this big long rail line. I just remember seeing one seemingly endless track.

“We were standing there, Wally with khaki shorts on, and in bare feet, we were all bare footed.”

The children were bundled onto the train to Adelaide before being sent to Sydney enroute to Mulgoa for the duration.

McArthur studied at Penrith High School and in 1948 won twelve of the school’s thirteen athletic events and was NSW High School champion in the 100 yards, long jump and 440 yards.

Aged 14 he ran barefoot across the Sydney Cricket Ground completing 440 yards (402.21m) in 52 seconds, which was the world’s fastest for his age group.

After the threat of war had passed McArthur was sent back to Adelaide and lived at St Francis House where he became athletics champion of Le Fevre Boys Technical High School.

Running was a passion for McArthur: “I have no idea how many records I broke. I just ran because I enjoyed it. I never got a lot of recognition for what I did as an athlete.”

It was a talent that came naturally to him, he said: “As a kid back in Borroloola fishing in the waterholes, you always had to be on the lookout for crocs. You had to be fast on your feet.

“There was also this emu that used to hang about the cattle station and he always went for me. He frightened the hell out of me. But I learnt to outrun him!”

John Pilger wrote in 1998: “Those who have since studied Wally’s times believe he was one of the fastest athletes of all time, the Carl Lewis of his day. 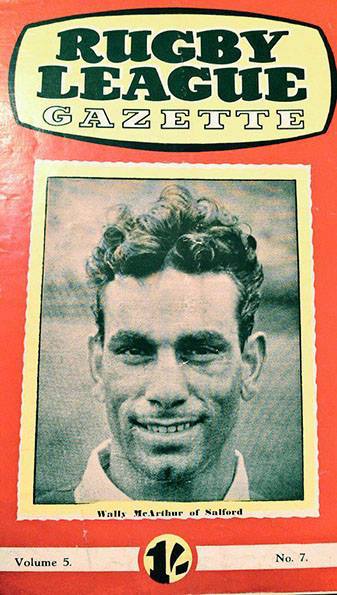 “At 14, and running without shoes, he was the fastest teenager on earth. Known as the Borroloola Flash, he was unbeatable in two states, yet he was left out of the South Australian state team to tour Tasmania, although others he had beaten were included.

“He complained, and was told that he could go if he paid his own fare. A friend paid it, and Wally duly won the national 100-yard title.”

This national championship victory boosted a growing feeling in athletics circles that McArthur was a good prospect for the 1952 Olympic Games.

“[Kevan] Gospar came second, but it was he who was selected for the Helsinki Olympics the following year,” said Pilger. Gosper went on to win a Silver Medal in the 4 x 400 metre relay in Melbourne in 1956.

However, McArthur was left on the sidelines. Aged 18 and in the prime of his running career he was not selected for the Australian team for the 1952 summer Olympic Games in Helsinki. There was much anger and disbelief.

“I would have liked to have run for my country,” McArthur said.

“I was in Wales when the 1958 Commonwealth Games were held in Cardiff. My times were a lot better than the Australian runners who competed. It made me a bit sad.”

After missing out on Olympic selection McArthur shifted his focus to rugby league. Despite Australian Rules football being the popular game in South Australia Semaphore did have its own rugby league side.

It wasn’t long before he was one of the leading league players.

In 1952 McArthur was voted the South Australian Rugby League’s best and fairest player. The Semaphore team was undefeated through the 1950 and 1951 seasons and he scored more than 900 points for the club over his career.

In 1953 he was selected to play for South Australia against Western Australia, where he won the Man of the Match award.

International rugby league scouts began to take notice. As early as 1950 McArthur had been spotted by Paul Quinn, a former Rochdale Hornets player in England, who was living in Adelaide.

Quinn facilitated McArthur’s recruitment to his old side and on November 19, 1953 McArthur flew to London from Sydney airport. He arrived to much anticipation and the news was revealed by the Daily Express the following day: “A new Black Flash is on his way to England” declared the headline.

The rugby league historian Graham Morris remembers the excitement that was created by McArthur’s arrival: “Tall and slim, Wally had the look, grace and speed of an outstanding athlete which, combined with a classic side-step, made him a great crowd pleaser.”

The former Leeds player Jack Lendill, who had emigrated to Adelaide, described McArthur as “probably the fastest winger in football boots.

“He will be a sensation in English football. In a league final in Adelaide, the club I played with [Railways] were defeated by Wally’s team [Semaphore] thanks to Wally. It was simply impossible to catch him and he turned the heat on that day with a bag of tries.”

A feature article in the Rochdale Observer focussed on his upbringing: “From boyhood, Wally McArthur has been in the midst of one of the greatest Christian and social experiments ever attempted in Australia. 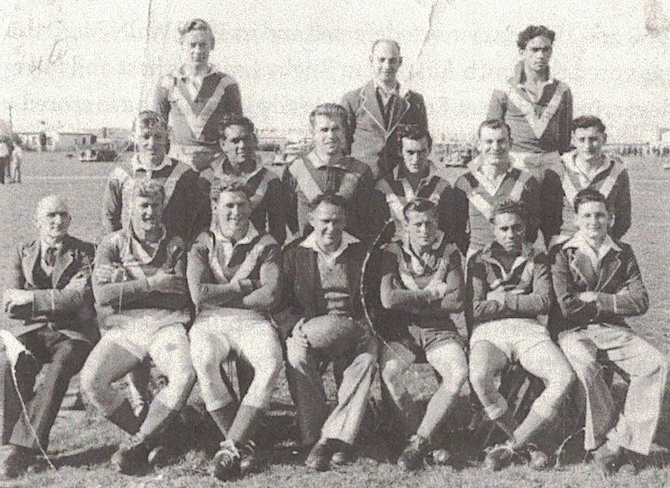 “Wally appears to be one of many proofs of the success of the experiment.”


He made his debut for the Hornets on 12 December 1953 against Salford, playing on the right wing, scoring three goals. He started the 1954 season by equalling the club record for most points in a match against Blackpool, scoring three tries and kicking eight goals for a total of 25 points.

He had been the first Aboriginal Australian rugby league player to play for an English club.

Despite not being selected to represent Australia as a sprinter he was selected in an English team to play The World, scoring four tries during the match.

In between rugby commitments he ran competitively and in 1957 was the North England sprint champion, winning both the 100 and 220 yard titles.

He also won the 100-yard sprint in the 1957 Highland Games. Members of the Royal Family were among the spectators and he was later introduced to Prince Philip, the Duke of Edinburgh.

In his 1990 biography Charles Perkins, who lived at St Francis’ House with McArthur, recalled reconnecting with him when playing soccer in England in the 1950s.

One night they stayed so long in a pub that they drank their bus fare.

The hour walk home gave them time to concoct an improbable story about broken-down buses and stopped watches. When they finally arrived home at about 1.30am Mrs McArthur was waiting.

Perkins tried to explain: “Well it’s like this Mrs McArthur …” he began as a dinner plate flew over his head.

In England, Perkins and McArthur had a new social experience. They could walk the street with a white girl. They were served in public venues, cafes and restaurants without question. It was one of the first times they were treated with equality and their Aboriginality was not an issue.

McArthur’s rugby achievements were recognised with a place in the inaugural induction to the Aboriginal and Islander Sports Hall of Fame in 1994.

He was named in the Aboriginal Australian rugby league team of the century in 2008.

McArthur returned to Australia in 1959 and worked as a fitter and turner at Port Adelaide and then moved to the industrial town of Whyalla working as a labourer and a welder in the shipyards for more than 25 years.

He also worked as a ganger for the Australian National Railways maintaining the Indian-Pacific line on the Nullarbor Plains.

Tragically, in 1977 he was involved in an accident that left him with crippling injuries.

After leaping from a worker’s rail cart to escape an oncoming train he suffered bone fractures in his legs and feet.

His feet remained badly disfigured and had to walk with the aid of a walking stick for much of the rest of his life. He was unable to work after the accident and shifted his focus to his family. He died in 2015.

Mark J Smith is the grandson of Father Percy Smith (1903-82) who was the first resident Anglican priest based in Alice Springs from 1933 and founder of St Francis’ House home for Aboriginal children with his wife Isabel.

PHOTOS (from top): Wally McArthur was a rising sprinting champion in the late 1940s and early 1950s • 1949 report in the Adelaide News about the sporting domination of St Francis’ House boys from Le Fevre High School including Harry Russell, Cyril Hampton, Ken Hampton and Wally McArthur who won the senior cup with seven firsts • Wally McArthur is featured on this 1950s rugby league magazine cover during his time playing in England at Salford where he played 46 matches and scored 29 tries • Semaphore Rugby Club in the 1950s. Wally McArthur, back row, far right – Harry Russell, middle row, second from left – Jim Foster, front row, second from right.